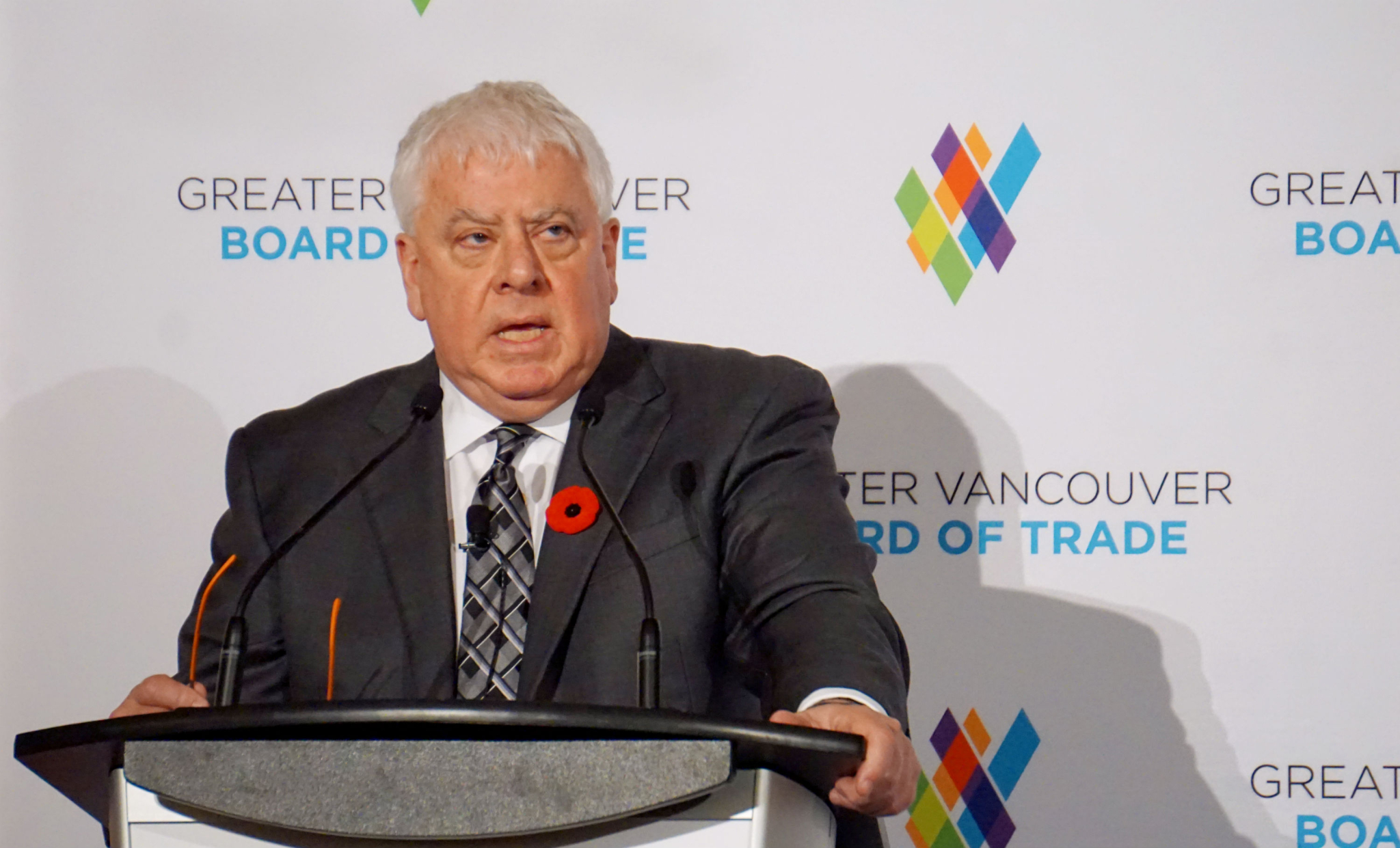 After downplaying concerns about delays to its investors last week, Kinder Morgan is warning it could lose more than $90 million per month due to its struggles with the bylaws of the City of Burnaby in British Columbia.

The Texas-based energy company made the admission as part of hundreds of pages of documents filed on Thursday with Canada's National Energy Board (NEB). The filings are urging the federal energy regulator to force the west coast city to forego municipal rules and accept construction of the multibillion dollar Trans Mountain crude oil pipeline expansion project.

The project, approved last November by Prime Minister Justin Trudeau's government, would triple the capacity of an existing pipeline network up to 890,000 barrels of oil per day from Alberta to the west coast. Supporters say it could provide a boost to Alberta's slumping oilpatch while creating thousands of construction jobs. Opponents say the project would dramatically increase tanker traffic, contribute to climate change and increase the risk of toxic spills.

In a 44-page affidavit, Michael Davies, vice president of operations for Kinder Morgan Canada, blamed delays in getting permits on Burnaby Mayor Derek Corrigan, arguing that the politician was "staunchly opposed to the project" and that his city "will do everything it can to frustrate the project."

Davies said these delays would cost the company $30 to $35 million in costs, including salaries, contracts, fees, travel, office, overhead and other expenses.

"Additionally, based on current estimates, projected loss of revenue to TM (Trans Mountain) due to the delay in the Project start-up is likely to exceed $90 (million) per month of delay," Davies wrote in the affidavit, dated Oct. 26, 2017.

The affidavit alleged that National Observer reported that Corrigan "believed the permitting process was a legitimate method of slowing down the project."

But the news report Kinder Morgan referenced and attached to its filings didn't include any such statement by Corrigan. Instead, it reported that Corrigan said he would use all resources available to him to hold the Trudeau government to account for an election campaign promise that only communities could grant permission for projects.

When asked about Kinder Morgan's claims on Friday, Corrigan told National Observer in a phone interview that the company was playing "fast and loose with the facts."

“It was quite stunning, because, first of all, I knew I never said anything like that," Corrigan said. "What I said was exactly what I’ve always said. I’m going to use every legal means available to me in order to oppose this, and then, if potentially, if I exhaust all of my legal avenues, if I exhaust all of my political avenues, then I’m going to stand in front of a bulldozer and accept the consequences for doing something that is an act of civil disobedience. But never once, did I say that I would do anything to affect the integrity of the Burnaby system or affect the way that my city operates.”

When asked to explain the discrepancy between its claims and the facts reported by National Observer, the company responded with an email saying: "Kinder Morgan stands by its reasonable interpretation of the article, and the actual article was attached to the affidavit."

The affidavit from Davies goes on to outline a series of emails and correspondence over the past few months in which the company has applied for permits, getting a range of different responses and rejections from the city. Those included a June 26, 2017 email stating that one of the company's applications was incomplete, as well as a July 20, 2017 email in which the city said it didn't have enough resources to process all of the applications "simultaneously."

Kinder Morgan has also run into obstacles over its efforts to comply with a city bylaw that requires a "tree plan" for every application involving the removal of trees. This would require an applicant to meet a number of conditions, including providing information on the location and diameter of each protected tree to be removed. Kinder Morgan requested an exemption from this bylaw, but the city denied this request on Oct. 10, 2017, the affidavit said.

Corrigan said that Kinder Morgan's Canadian boss, Ian Anderson, came into his office to discuss the matter earlier this week, prior to the company's filings with the NEB. The mayor said that the executive then pressured him to intervene during a meeting that lasted about 45 minutes.

“He came in to essentially threaten me that he was going to go to the National Energy Board over the permitting process and what was I going to do about it," Corrigan said in an interview.

“I said to Ian Anderson that I do not interfere with the regulatory process in the city and the appropriate processes for granting permits. And I would neither interfere to hinder their application, nor to advance their application. It’s strictly an area in which our staff have to act objectively and independently.”

The latest filings and concerns about delays contrast with what senior company executives told investors a few days ago during an amicable Oct. 18, 2017 conference call with investors.

On the call, the executives touted progress in securing permits needed from the provincial and federal governments, noting that they were "slower than we expected it to be," but they neglected to mention any of their concerns about the City of Burnaby.

"I'm optimistic we can, working with our contractors and the permitting authorities to create more efficiency and timeliness of those (permit) processes," said Richard Kinder, co-founder and executive chairman of the company.

Kinder's comments came during a cordial exchange that was prompted by questions from Robert Kwan, an analyst for RBC capital markets.

"The events of the last couple of weeks are very encouraging. And I'm optimistic as a result of those. But we need to maintain that and we need to be working with our contractors, now, to look for ways and means to keep the schedule," Kinder added.

Steven Kean, the president and chief executive of Kinder Morgan, also told Kwan on the call that the company was making progress with the B.C. government, getting hundreds of permits out of about 1,000 required to proceed with construction.

"I think the other message there, Robert, is that, you know, the bureaucracies and the statutory authorities of B.C. have continued to do their work," Kean said. "We don't yet see any evidence of any political interference."

Kwan, the RBC analyst, declined to respond to questions about whether he had considered asking Kinder Morgan about the Burnaby situation or whether he thought the executives should have disclosed concerns about the city during the call. An RBC Capital Markets spokeswoman instead sent National Observer an analysis Kwan had prepared, after the company's filings on Thursday. The analysis said that Kinder Morgan's shares on the stock market could suffer if the NEB rejects the company's filings, but that they could benefit if the regulator accepts the request.

Kwan's analysis also noted that the B.C. Supreme Court had ruled against Burnaby following a similar dispute in 2015.

"It’s part of this larger pattern, unfortunately, of Kinder Morgan kind of picking and choosing which laws it wants to follow," Kung told National Observer.

Kinder Morgan declined to respond to other questions about its filings, referring National Observer to a statement on its website that accused the city of dragging its feet.

"The City's failure to act in a timely manner raises serious issues of jurisdiction that we are compelled to bring to the Board's attention," the company said in the statement. "The Project will provide important local, regional and national benefits and that is why we are also asking the NEB to establish a process for Trans Mountain to bring similar matters to the Board for expedited determination in the future. As previously disclosed, such measures are necessary to help mitigate a possible delay in the construction schedule."

The company also said that its "door remains open to the City of Burnaby" and that it welcomes the opportunity to discuss a solution.

An NEB spokesman said that the regulator has an obligation to review the company's request and that it would set out a process for next steps after it has had the chance to review it.

Meantime, when asked if Burnaby would consider hiring more staff to speed up processing of Kinder Morgan's permit applications, Corrigan said he felt no obligation to help Kinder Morgan.

"One of the points that I want to make out of this is that Kinder Morgan thinks that it’s way more important than it is," he said. "I have a billion dollars worth of development going on in my city this year. I have got a multitude of high-rise developments, commercial developments, rental developments, they’re happening. And our staff are under significant pressure to be able to accommodate all of the projects that are before us. Kinder Morgan doesn’t walk in and elbow everybody else out of the way. It may be that they think that they’re important enough that they can simply tell people what to do and they may have gotten used to that at the National Energy Board. But in Burnaby, they queue with everybody else to go through the system and ensure that we’re able to deal with them in due course.”

Assessing the risks of Kinder

"An oil spill would put at risk industries that together employ over 200,000 people locally including tourism, film and TV, real estate, high tech, agriculture and coastal industries.

***
In 15 years of operations, Kinder Morgan has accrued a significant number of spills, largely the result of human error. This includes four along the Trans Mountain route since 2005.

In the case of a major spill, taxpayers would likely be responsible for the burden of costs, as a company’s liability is limited to $1.3 billion and a major spill could easily cost ten times this amount."

I have great respect for Mr.

I have great respect for Mr. Corrigan for not letting a multi billion Corp like kinder Morgan push him around .