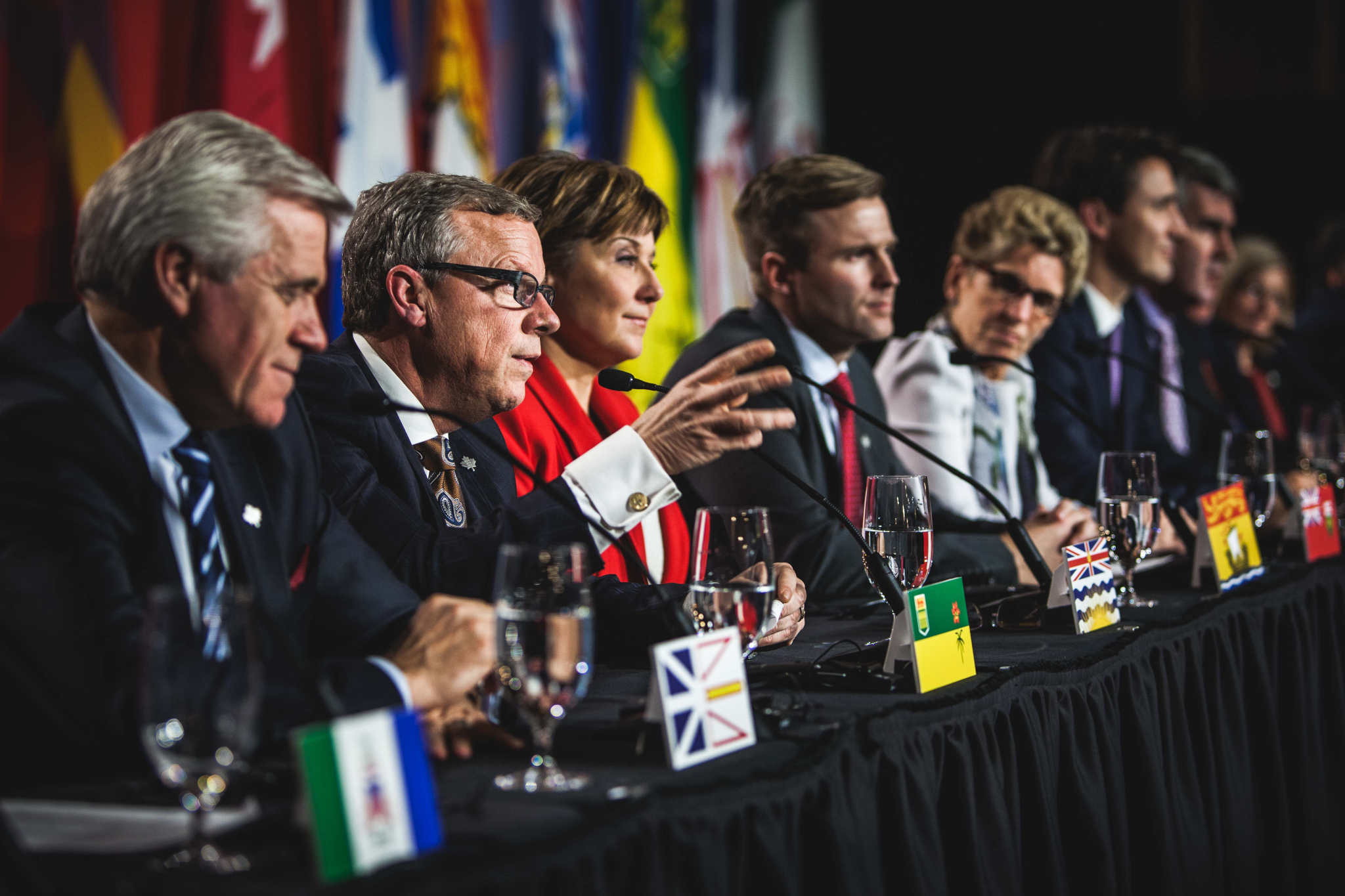 Saskatchewan Premier Brad Wall participates in a national meeting on climate change with other premiers in Ottawa on Dec. 9, 2016. File photo by Alex Tétreault
Previous story
Next story

Two unlikely allies in the Canadian federation say they want more time to review an urgent push by Kinder Morgan to get around the rules for construction permits needed for its west coast pipeline expansion project.

Lawyers for both the British Columbia and Saskatchewan governments argued for more time in submissions sent on Wednesday and Thursday to the National Energy Board (NEB). By contrast, the Alberta NDP government wants the federal regulator to consider granting Texas-based Kinder Morgan "relief" from the City of Burnaby's bylaws in a "timely manner."

Alberta and the pipeline operator say it's important for the NEB to intervene on Kinder Morgan's request, in a case that raises serious constitutional questions about the powers of different levels of government.

The NEB has the powers of a federal court, which would allow it to overrule Burnaby's bylaws and grant Kinder Morgan's request if it agrees with the company's arguments. NEB spokeswoman Sarah Kiley said that the regulator was still reviewing the request.

Kinder Morgan submitted its request on Oct. 26, alleging that Burnaby officials were making it difficult to get the permits needed to proceed with plans to build its Trans Mountain pipeline expansion project. It has also asked the NEB to set up a new process to fast-track any future motions it brings against B.C. or municipalities in general.

This request comes less than two weeks after Kinder Morgan's co-founder and executive chairman Richard Kinder told investors on a conference call that he was "encouraged" by recent efforts to get the required permits and that he was "optimistic" the company could work together with its contractors and the permitting authorities to improve the efficiency and "timeliness" of the process.

In an interview with National Observer, B.C. Environment Minister George Heyman explained that the significance of Kinder Morgan's request cannot be taken lightly.

"Kinder Morgan has asked the National Energy Board to have a very short time frame for submissions and we don't agree. There are significant constitutional issues at play here and we believe those issues need to be fully heard and B.C. needs the time to prepare our submission and part of preparing that submission will be based on what issues are brought forward by Kinder Morgan and the municipality of Burnaby."

While B.C.'s NDP government has pledged to use all tools available to block the Kinder Morgan project, approved last year by Prime Minister Justin Trudeau's government, Saskatchewan and Alberta have both been strong supporters of new oil, gas and pipeline expansion.

The pipeline expansion project would triple the capacity of an existing line linking Alberta's oilsands producers to the B.C. west coast, allowing Kinder Morgan to ship up to 890,000 barrels of oil per day.

The project's supporters say the new pipeline would create jobs and growth in an industry that has been slumping since 2014 due to a plunge in global oil prices. Opponents say that the Trans Mountain expansion would increase the risk of spills, putting some existing resource and tourism jobs at risk while contributing to climate change.

The company proposed a Nov. 6, 2017 deadline for submissions in response to its request, prompting the objections from both Saskatchewan and B.C..

P. Mitch McAdam, the director of constitutional law at Saskatchewan's Ministry of Justice, wrote in a Nov. 1 letter to the NEB that he was requesting "further time to prepare those submissions as it will be very difficult to provide a substantive response by the deadline of Monday, November 6, 2017 proposed by (Kinder Morgan lawyer Shawn) Denstedt."

Although the Saskatchewan letter didn't take a position on Kinder Morgan's motion, the request for more time from Premier Brad Wall's right-leaning Saskatchewan government may come as a surprise for political and industry observers who have come to know the province as an opponent of excessive rules imposed on the oil and gas industry.

An official from the provincial ministry in Saskatchewan said he was not immediately able to comment about the province's request for more time.

'These rules apply to everyone,' says Alberta's Notley government

Alberta's left-leaning NDP government said it can meet Kinder Morgan's proposed deadline of Nov. 6 to submit its arguments, noting that it has been a strong supporter of the pipeline expansion since the beginning.

"It is Alberta's position that one jurisdiction does not have the right to obstruct a project of national importance," said Cheryl Oates, director of communications for Alberta Premier Rachel Notley. "There is an existing process to ensure federally approved projects move through the permitting process in a timely — yet thorough — manner. These rules apply to everyone... We believe this issue needs to be heard in a timely manner to avoid impacting construction any further."

Heyman added that B.C. is now challenging the Trudeau government's approval of the Kinder Morgan project at the Federal Court of Appeal because it believes federal officials failed to assess the national importance of protecting the west coast.

In his interview with National Observer, Heyman also noted that Kinder Morgan has been called to task by the NEB for breaking rules and beginning some construction activity that was disrupting salmon spawning areas, without getting approval.

"So now, it appears, that they want to get around the legitimate requirements of the B.C. government and apparently also B.C. municipalities and simply jump over our constitutional right to issue permits after we're assured that environmental conditions have been met and that first nations consultation has been appropriately conducted," Heyman said.

The B.C. government's legal submission, signed by attorney Thomas Berger, noted that Burnaby disputes some of the "evidence" presented by Kinder Morgan in its motion and describes the company's efforts as an "abuse of process."

Citing a 2016 National Observer report, Kinder Morgan had alleged that Burnaby Mayor Derek Corrigan "believed the permitting process was a legitimate method of slowing down the project" according to an affidavit signed by Executive Vice President of Operations Michael Davies.

But the news report in question, didn't actually say this and Corrigan has also denied ever making such a statement.

Berger suggested in his affidavit that Burnaby might present more evidence to refute Kinder Morgan's claims.

"It is premature to assume that the matter can be completed on an expedited basis, as it is clear from the October 31, 2017 letter to the Board from counsel for Burnaby that Trans Mountain's evidence may be disputed and Burnaby may seek to place further evidence before the Board," Berger wrote. "In any event, six business days is not sufficient time for the Attorney General to make submissions. The public interest will not be served by requiring an Attorney General to make hurried submissions on matters of constitutional importance on a short fuse because the applicant would prefer that its motion proceed in haste."

Berger also wrote that the company had gone too far with its request to create a new special process for any future motions against the province or municipalities.

"Further it would simply be inappropriate for the Board to fix, in the abstract, a schedule to hear hypothetical motions on constitutional questions, without regard to the particular questions such motions may raise and without knowledge of the evidence that may be at issue. There is no basis for the Board to set a template schedule for hypothetical future motions in the present application."

Heyman also said that Kinder Morgan's request appeared to be designed at avoiding due diligence before permits are issued.

"Our position is that we will be fair and thorough," Heyman said. "We know that the federal government approved this process, but B.C. gets to put conditions on environmental permitting and that's what we've done."

For its part, Burnaby believes that Trans Mountain's application is "misguided" noting that it's still reviewing the company's permit applications and has not rejected them.

"The time taken in the process has been largely attributable to deficiencies in TM's (Trans Mountain) application materials," wrote Gregory McDade, a lawyer for the city, in a letter dated on Oct. 31.

Burnaby's letter also noted that the city had granted a request from the company to consider potential mitigation measures proposed by Trans Mountain at a recent meeting. But it said the company didn't mention its legal motion at that meeting and never followed up on the paperwork it said it would deliver.

McDade added that Burnaby wanted more time to review all of the material submitted by Trans Mountain as well as an opportunity to cross-examine on the affidavit from Davies.

Kinder Morgan responded one day later saying it had had enough of delays.

"The facts at issue should be well known to Burnaby and easily accessed," wrote Shawn Denstedt, the lawyer representing Kinder Morgan. Trans Mountain seeks relief from the Board precisely because of Burnaby's lengthy process and delay. Burnaby's request for further time is both unreasonable and demonstrative of the reasons that Trans Mountain has filed this Motion with the Board.

"Trans Mountain is not in a position to tolerate further delay."

When asked by National Observer if it believed Saskatchewan's request for more time was reasonable, Kinder Morgan responded with a short statement.

"While Trans Mountain has proposed a timeline, the National Energy Board will ultimately determine the schedule, however we hope for an expeditious decision," the company told National Observer in the statement.

Who the hell are you people?

Who the hell are you people? If a corporation says it wants something and it wants it now - who are you citizens to deny them?

If TM "is not in a position

If TM "is not in a position to tolerate further delay", they are no doubt closing down shop.
Time for the Musqueam to scatter down!

Here is another untruth.

Kinder Morgan only in 2005 took over the pipeline company, and only two years later, through its negligence, there occurred the pipeline rupture that drenched some houses near mine and drove me out of my house. Company management is important and determines whether an operation is careful or sloppy. Kinder Morgan can not take credit for an operation before it owned the company.
You can see a picture of the card on page 15 of my 'Comment' to the NEB at https://docs2.neb-one.gc.ca/ll-eng/llisapi.dll?func=ll&objId=2810415&obj...

The Mayor of Burnaby .Derek

The Mayor of Burnaby .Derek Corrigan .will not be Alone Sanding in front
Of a Bulldozer. And maybe We Will .Turn that Bulldozer on the Back Stabing
Federal Goverment . Our Commons is at Stake