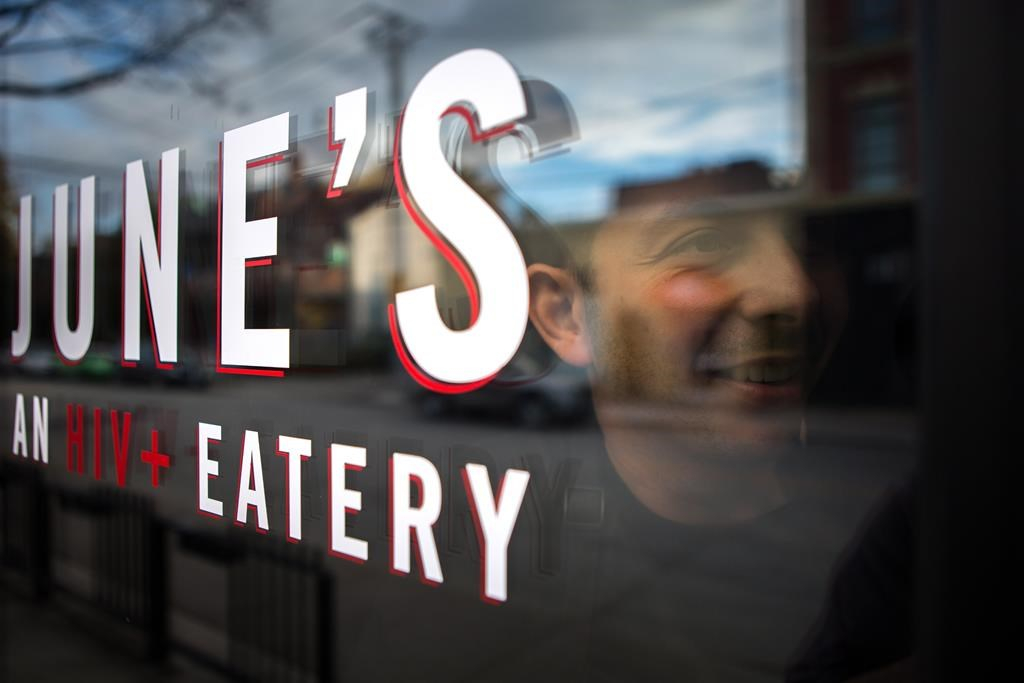 Chef Matt Basile poses for a portrait at the pop up restaurant June's HIV+ Eatery in Toronto on Tuesday, Nov. 7, 2017. Photo by The Canadian Press/Chris Donovan
Previous story
Next story

While working as a sexual health educator in Calgary several years ago, artist and activist Mikiki would often gently correct clients who said they had never met a gay person. Actually, you probably have but just didn't know it, Mikiki would explain.

"When people say, 'I don't know anybody who's HIV-positive,' I'm like, 'If you live in Toronto, you actually do,'" says Mikiki.

"You've totally met people who are living with HIV. Do they feel comfortable to come out to you about their HIV status? Probably not."

Mikiki is one of 14 HIV-positive chefs who developed the menu and cooked the food at June's HIV+ Eatery, a pop-up restaurant organized by Casey House, a Toronto hospital for people living with HIV and AIDS.

It's billed as Canada's first HIV-positive restaurant and was launched to help dispel outdated myths. The idea came after a recent study found that half of Canadians said they wouldn't knowingly eat or share food prepared by someone who is HIV-positive. Many incorrectly believed HIV could be transmitted through skin-to-skin touch, saliva, or by sharing glasses or cutlery.

"The numbers are kind of staggering, but it wasn't overly surprising," says Joanne Simons, CEO of Casey House. "For the clients that Casey House serves, that stigma is very real on a very daily basis."

At the restaurant, the chefs wear aprons emblazoned with myth-busting slogans like "Kiss the HIV+ cook," and "I got HIV from pasta, said no one ever."

Matt Basile, chef at Toronto's Fidel Gastro, came on board to train the cooks and help them develop the menu.

The experience level in the kitchen ranges "from the good to the bad to the ugly," says Guy Bethell, one of the chefs on the crew, who has been living with HIV for 30 years.

"I'm a soup and stew guy, I keep it pretty easy. But everybody had something to bring to the table, and Matt was able to pull threads from all of us."

June's quickly sold out its two-night run and organizers hope to hold similar events in the future.

Medical advancements related to HIV have changed dramatically in the last 30 years: once a terminal illness, it can now be treated with a combination of medications. But Simons says in many ways, public perception is stuck in the 1980s.

"When it was a death sentence there was a lot of fear and a lot of misunderstanding about the disease," she says. "We really need to take the opportunity to make sure people are educated about HIV and what it means today."

Mikiki says the representation of HIV in popular culture and media hasn't caught up with medical advancements and often focuses on death and tragedy, or the criminalization of non-disclosure.

While working at a Toronto clinic, Mikiki noticed that "the amount of anxiety that people would feel ... was completely dismantled or diffused" if they knew at least one person living with HIV.

"Sometimes I would use that as an opportunity to come out about my status and talk about how essentially normal and in a lot of ways boring my life can be, living with HIV, in terms of managing it as a health condition."

Simons says her ideal outcome from the pop-up restaurant would be a dramatic change in public awareness. She hopes that "if we were to run our stigma survey again in the next few months or years, the results will be much more favourable."

Mikiki says the experience of serving and preparing food allows people with HIV the opportunity to show the general public what living with the virus actually means.

"It allows us to be seen as, honestly, just as humans."