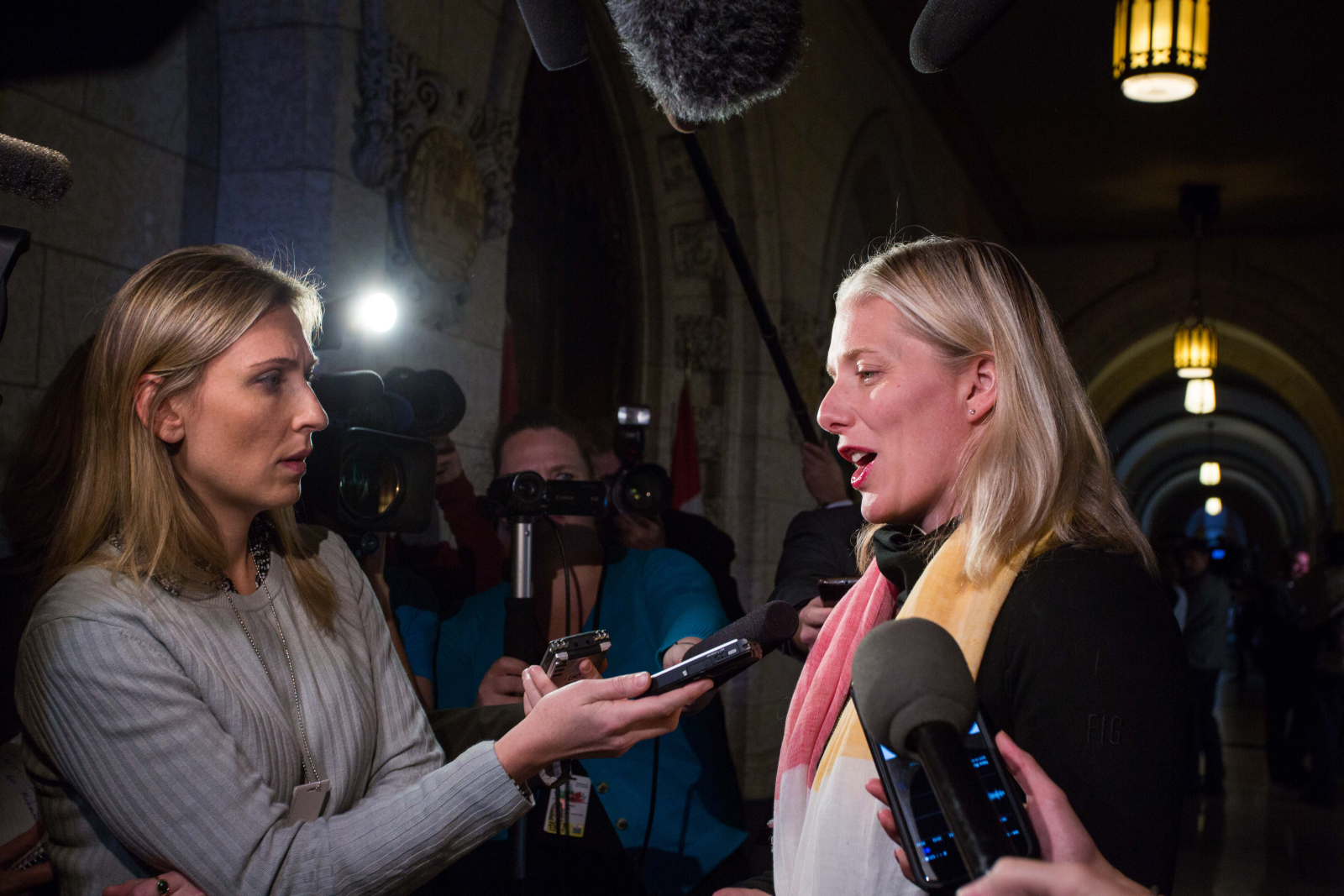 Environment and Climate Change Minister Catherine McKenna answers questions from reporters outside the House of Commons on Nov. 8, 2017. Photo by Alex Tétreault
Previous story
Next story

Climate change talks in Germany are headed for a collision course on coal this week — and Canada is right in the middle of it.

Environment Minister Catherine McKenna arrived on Sunday in Bonn, Germany, to attend the second week of COP23, the annual United Nations climate change talks that two years ago led to the Paris climate change accord.

This year, the parties to Paris are hammering out rules for how that accord will be implemented, how carbon will be counted and how countries will be held accountable for their emissions cuts.

McKenna and her British counterpart, Claire Perry, minister of state for climate change and industry, want the conversation to focus on getting rid of coal as a power source, which is responsible for more than 40 per cent of global carbon dioxide emissions.

McKenna and Perry are hosting a joint event Nov. 16 to launch a joint campaign calling for other countries to declare a plan not to build any more unabated coal-fired plants and eliminate existing ones. Unabated plants are those that have no carbon capture or storage technology to keep emissions from ending up in the atmosphere.

"We want every country to look at how they can reduce their use of coal and phase it out and we want to be supporting developing countries to do so," McKenna told The Canadian Press in an interview last week.

McKenna did not, however, commit any additional money to the program.

A year ago, Canada committed to eliminating coal as a source of power by 2030. Britain has committed to getting rid of it by 2025.

Since Canada and the U.K. first announced their coal phase-out campaign last month, Italy and Netherlands added themselves to the list of countries aiming to get rid of coal. France had already set a 2025 coal-phase out target.

But their anti-coal initiative is in direct contrast with the United States, which is kicking off the week with an event promoting all the ways fossil fuels like coal can be part of the narrative of combating climate change.

"I anticipate it will be a big story this week," said Catherine Abreu, executive director of Climate Action Network Canada, who has been in Bonn since the talks began Nov. 6.

Last month, Scott Pruitt, the head of the U.S. Environmental Protection Agency, declared the "war on coal is over" as he tore up the U.S. Clean Power Plan, a legacy of President Barack Obama that required states to cut emissions based on energy consumption and offered incentives to foster renewable power and energy efficiency.

The U.S. successfully managed to convince the G20 to include a statement about the U.S. helping other countries "access and use fossil fuels more cleanly and efficiently" in its final statement in July. On Monday, U.S. officials and fossil fuel industry representatives will make presentations about it.

McKenna however said the world has already decided with its money that coal is a relic of the past.

Despite her bravado, the Global Coal Plant Tracker shows plans are afoot for another 1,600 new coal plants, which once operational would expand coal power by 42 per cent around the world.

China's energy companies are behind 700 of them, despite China's pledge earlier this year to scale back its coal plans at home. India's state-run National Thermal Power Corp. intends to invest more than $10 billion to build new coal plants over the next five years.

If Canada and the U.K. can get China and India involved to some extent, it would be a real victory, Abreu said. She doesn't expect them to agree to phase coal out entirely, but agreeing to help would be a big step.

Germany would be another big get for the coalition, and may be an easier fish to land if German Chancellor Angela Merkel tries to get the German Green Party into her coalition. The Greens want Germany to meet its emissions reduction targets, which would require it to abandon coal.

It is not wrong to try and

It is not wrong to try and shut down coal as an energy source but I fear the Liberals are also using this to distract from the fact that their record on climate change and control of fossil fuels is hopelessly inadequate. They know they will face criticism at this meeting for their bad record and pathetic targets. The coal issue allows them to deflect this.

Here on the West Coast

Here on the West Coast thermal coal is being shipped out of the Westport Terminal. It arrives by the trainload from Wyoming, up to eight trains a day, 125 cars long. It is dirty, soft powder coal used for thermal production. Canada can immediately change the game by putting a tax on the carriers of this dirty coal, specifically the train route (BNSF) and the transfer to shipping (Westport). If the carriers find this product costing them more they will pass the cost onto the buyer (China / India).

Canada is led by a bunch of

Canada is led by a bunch of hypocrites. Ms McKenna can talk all she wants blaming other countries for their use of coal, while on the other hand, the federal government continues to subsidize the fossil fuel industry, approve new oil pipelines, promote LNG and fracking. The Trudeau administration has also officially decided that it will not take into account in its annual report on GHG emissions, emissions resulting from "natural disturbances" in the LULUCF sector. Natural disturbances includes emissions from forest fires, pest infestations, melting permafrost, drought, etc. The present administration doesn't consider emissions coming from "natural disturbances" being a result of human intervention. In other words, the fact that wildfires are burning more and more of our forests (the number of hectares burned have doubled since the late 1970's and is expected to double again by the end of this century) is not the result of a warming climate. Forests in Canada used to be consider as a "sink", meaning that forests were sequestering more carbon than they were emitting; but in the last 30 or more years, Canada's forests have become a major source of carbon, putting into jeopardy the federal government emissions reductions target.

Coal is dead. Why do we keep

Coal is dead. Why do we keep talking about it? I'm really sick of hearing about fossil fuels.