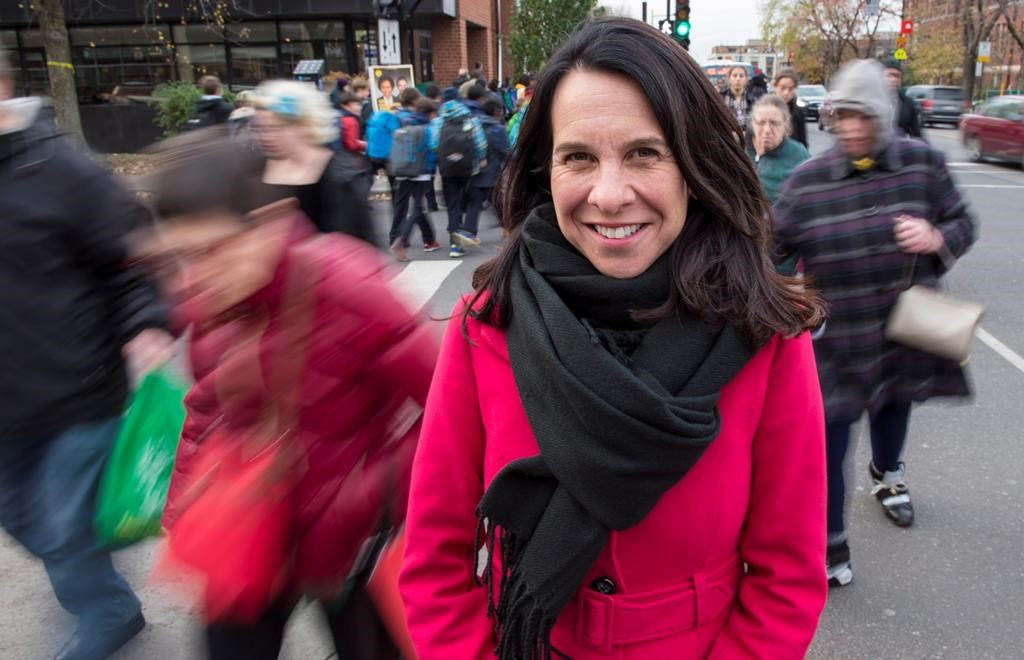 Montreal Mayor Valérie Plante stands on a busy street corner during her successful election campaign on Wednesday, November 1, 2017 in Montreal. Photo by The Canadian Press/Paul Chiasson
Previous story
Next story

When Valérie Plante was elected mayor of Montreal on November 8, she acknowledged the historic moment in her victory speech, telling a packed room of supporters that she was humbled and proud to break the glass ceiling.

“Tonight, we wrote a new page in Montreal’s history. Three hundred and seventy-five years after Jeanne Mance co-founded the city, Montreal has its first female mayor.”

Given the scope and significance of this milestone, one would expect other politicians to reach out and offer congratulations. Certainly, many did. Some, however, did not consider the achievement meritorious enough to validate with even the most elementary of gestures. Enter the United Counties of Prescott and Russell (UCPR) council and a study in pettiness.

Upon hearing the news, Mayor Jeanne Charlebois of the Town of Hawkesbury suggested a congratulatory letter to Plante from UCPR council members – representing eight municipalities. The Counties have a large Franco-Ontarian population. French is the sole language of 62.4 per cent of more than 85,000 residents, many of whom follow Quebec events and routinely interact with people in the neighbouring province.

The scope of Plante’s victory extends beyond Montreal and Quebec, with implications for women in politics far and wide. She ascended to the mayoralty of Canada’s second-largest city after Toronto, making Montreal the largest city in North America with a female mayor. Beating a widely-known incumbent backed by a powerful political machine, an Old Boys’ Club of influential businessmen and politicians, plus endorsements by mainstream media, Plante’s accomplishment is remarkable and certainly worthy of congratulations.

So, the letter requested by Mayor Charlebois would seem a mere formality. However, her innocuous request turned into a textbook example of how some men continue to resent and undermine women’s presence in the public and political arena. And often it’s in a passive/aggressive, petty, occasionally oblivious fashion that communicates to women (what’s referred to as "death by a thousands cuts" by author Jessica Bennett) that they don’t really belong there and aren’t really part of the club.

The letter was prepared by Mayor Charlebois and signed by Council warden Gary Barton, mayor of the township of Champlain. When the floor was opened to comments by council members, a full-blown heated discussion ensued. All other council members are male and all refused to sign the letter. Barton withdrew his signature too.

Mayor François St. Amour of La Nation said he felt that sending congratulations to one newly-elected mayor and not others made no sense. In addition, he said they should “keep their noses out of Quebec politics”.

The local paper, The Review, presented the entire council exchange in a recent article, detailing refusals to sign the letter as well as the infuriating condescension and churlishness to which Mayor Charlebois was treated.

“Gentlemen,” she said to an audible snicker coming from the rest of council, “we have an outstanding situation here. For the first time, in the history of the City of Montreal, that’s over 300 years, they have a woman who has been elected mayor, over a very strong competitor, and I think this is something absolutely remarkable what she has accomplished with her team.” She went on, “For us to say to the lady, ‘Congratulations, we wish you all the best. Thank you for presenting yourself and doing such a great job,’ I don’t see anything wrong with that, sir. Maybe from your point of view as a man, it’s business as usual.”

To that last comment, St. Amour loudly interjected, “No, no. Do not go there.”

And by “there”, he must have meant being accused of something he was clearly doing.

The Warden then went around the room, asking if the letter would be signed by them and every single male member said no.

“I guess, it’s not going to happen under my signature,” said Barton.

“It’ll happen under mine,” replied Charlebois.

The reaction revealed an inability to understand how validating and encouraging it is to support the newly-emerging group of women in politics (assuming gender parity and equal representation is even something you remotely value), how extremely difficult it can be for women in fields dominated by men to make an impact and effect change; and, finally, the desire to undermine female initiative and leadership.

The reason Charlebois can relate to Plante’s win is because she’s been there. In many ways, she’s still there, since she remains the only woman on a council dominated by men. In 2006, she, too, made history by becoming the first female mayor in Hawkesbury’s history and the first female member of Prescott-Russell United Counties Council. “I’m hoping it will [encourage more women to enter politics]. I hope this shows other women that this can be done,” she was quoted as saying at the time.

Questioned by Quebec media on his refusal to congratulate Mayor Plante, Mayor St-Amour had this groan-worthy reply: “I don’t like being called a sexist. I’m not and I never will be. I love women, I married one.”

Pivotal moments will continue to happen

The Montreal election was a pivotal moment, not just because of Plante’s win, but because of a record-breaking number of women elected as borough mayors and borough and city councillors in and around the island of Montreal. For the first time ever, there are more women than men in Montreal City Hall. While this is particularly welcome news to equality advocates and those who wish to see more women in politics and in the public arena, it’s understandably scary to those who enjoy the status quo and how it’s benefited them in the past.

While Valérie Plante only wanted to thank Mayor Charlebois “for her initiative and kind words,” Sue Montgomery, another political newcomer who was just elected mayor of Montreal’s Côte-des-Neiges-Notre-Dame-de-Grâce district, had this to say: “I’m glad [Charlebois] is going ahead and signing the letter herself. And, of course, many men don’t see Val’s win as extraordinary because they’ve never had to fight as hard as we do. The Old Boys’ Club ensures one of their own always wins. Women don’t have that network, but we’re building it now.”

As milestones occur and glass ceilings are shattered, many men will continue to resent it and deny that there is a problem or anything that requires rectifying. As more women are emboldened to run, their dissatisfaction (and many men’s, as well) with the status quo is turning into electoral participation – and victories. That won’t please everybody, but congratulatory letters or not, the milestones will keep coming and change will continue to take place. Hopefully one that represents all of us equally.

Mayor Charlebois confirmed to National Observer that the letter of congratulations was signed and sent from her office, but declined further comment.

It's sobering to learn what

It's sobering to learn what women in municipal politics are facing. On the positive side it's gratifying that mayor Jeanne Charlebois recognized the importance of Plante's victory and did send the letter despite the unbelievably petty and sexist reactions of her colleagues.