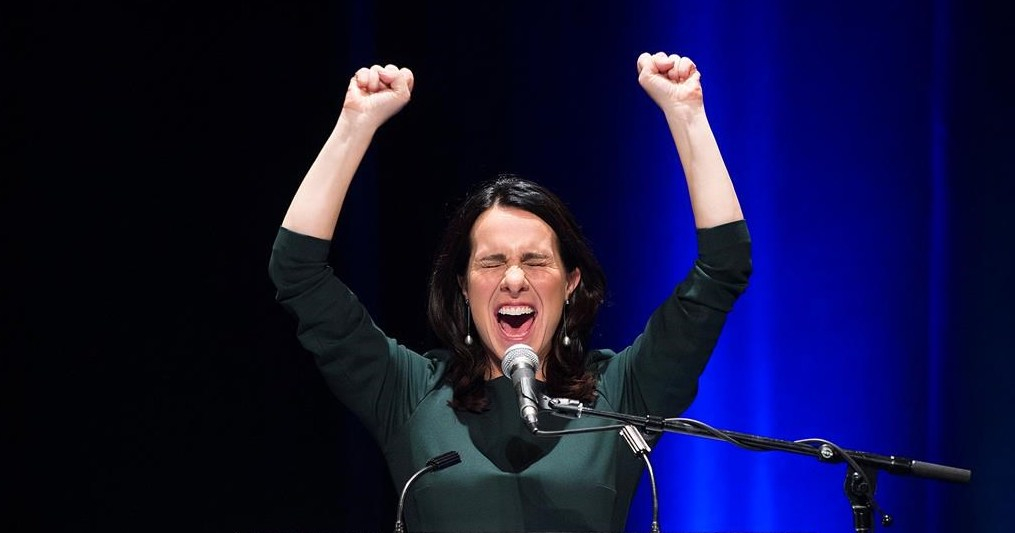 Valérie Plante became the first woman to be elected mayor of Montreal on Nov. 5, 2017. Photo by The Canadian Press
Previous story
Next story

Valérie Plante has made history, becoming the first woman to be elected in Canada's second largest city, defeating incumbent Denis Coderre in a close-fought race in Montreal.

"Yes, we've arrived," exclaimed a smiling Plante with her arms in the air as she took the stage to give her victory speech on Sunday evening to an energized crowd of supporters.

Plante was leading with over 51 per cent of the vote just after 9 p.m. ET when most media outlets started to declare her the winner of the election in Montreal. The incoming mayor is a board member at the Broadbent Institute, a think tank named after former NDP leader Ed Broadbent. Her campaign had strong support from local New Democrats as well as members of Québec Solidaire, a left-leaning party in Quebec's National Assembly.

"You know I've never started a race as the favourite. As they say in English, I was the underdog," said Plante, as she continued her speech. "Many doubted us, but we made people value our ideas and our vision."

She noted that 375 years after nurse Jeanne Mance helped found the city of Montreal and its first hospital, that its city hall would now be led by another woman.

The packed crowd at the Corona Theatre, Projet Montreal’s headquarters for the night, was ecstatic, erupting into tears, screams and chants of “Valerie, Valerie!”

Plante battled with rapturous applause as she spoke and literally jumped for joy — which in turn caused her to lose an earring. But she still continuing her speech, without missing a beat, after removing the other earring.

"The election tonight wasn’t about me. It was about you and what you want for Montreal," she said. "I think we’ll be able to achieve great things together."

Plante also said she hoped to work with everyone in the population, the business community, as well as the provincial and federal governments to implement her policies.

Punctuating her address several times with her trademark, full-sized laugh, Plante said that “we have lots of work to do in the coming years,” and appealed directly to Montrealers for their help in “getting [it] done.”

She also said she wants to build bridges between the city’s communities. “Francophone, anglophone, allophone - we all have more in common than many people have us believe.”

Coderre, who had about 46 per cent of the vote, announced Sunday evening that he would be leaving municipal politics and wouldn't take over the role as leader of the Opposition at city hall.

After four years as mayor, Coderre, a former federal Liberal cabinet minister, has presided over a period of growth in Montreal’s economy with tens of thousands of new jobs and billions of dollars in investments, including the development of an artificial intelligence hub.

Coderre said he had called Plante to wish luck to her and her team who “were chosen to lead our city”.

Coderre's speech also joked in his speech that he didn't want to talk about electric cars, making a bitter reference to a controversy that dogged the final days of his campaign, related to an electric car race event that was considered to be a costly boondoggle.

But he noted that the city had taken many positive steps forward during his mandate as mayor.

“I’m not going to shy away from what we’ve accomplished in the last four years, that’s for sure,” he said to a crowd.

Coderre is particularly known outside of Montreal for his opposition to TransCanada’s Energy East pipeline, and he has a lot of critics in western Canada's oilpatch, who were counting on the abaondoned project to spur growth for Alberta's slumping oilsands sector.

Plante was also opposed to the Energy East pipeline and had celebrated a "victory" of citizens after the company behind the proposal, TransCanada Corp., announced it was terminating the project. She has also said that the population should concentrate on developing clean energy.

Earlier in the evening, Projet Montreal volunteer Rim Mohsen said that Plante's Projet Montréal party had “already won,” because it made extraordinary leaps in terms of membership, its reach and media coverage. She said that the party’s headway marked a “huge moment for progressives” everywhere. Projet Montreal was founded just thirteen years ago.

Benoit Dorais, re-elected borough mayor for the South-Ouest borough, home to the Corona Theatre, said that he’d “never been as proud to be a Montrealer as this evening.” He exclaimed that “we are making history” – a sentiment echoed throughout the evening by speakers and attendees.

His colleague Luc Ferrandez, one of the party’s most established and charismatic members was also re-elected borough mayor of the Plateau-Mont Royal. Taking the stage, he expressed hope that Plante’s election would have a ripple effect across the province, proving to smaller towns that women can and should take charge. He added that the party would not follow Coderre’s approach of making decisions without consulting Montrealers.

The crowd jeered and booed as Corderre’s address was live streamed, waving at the projector and cheekily singing “goodbye.”

Former Montreal Gazette reporter Sue Montgomery was also elected borough mayor for Cote-des-Neige-Notre-Dame-De-Grace, ahead of her opponent, former provincial legislator Russell Copeman, with 47.74 per cent of the vote.

The party at Plante's headquarters showed no signs of letting up as the clock approached midnight, with music blaring, cameras flashing and people still dancing and embracing.

At Coderre's election headquarters, people stared at their cellphones in silence as two televisions in the front broadcast images of Valerie Plante's headquarters where crowds were seen cheering.

There was disappointment in the dark room as the crowd awaited Coderre's concession speech.

"I'd be a millionaire today if I could tell you how it happened and why it happened," said the borough mayor who was leading in his own district.

"I don't have any idea to be honest with you (about why this happened. I'm surprised actually because in my opinion (Denis Coderre) has done a remarkable job for Montrealers and the city of Montreal in general. So I think we need to absorb tonight and in the coming days the results and come away with it standing a little bit and to move forward."

Stuck in traffic, Coderre was late for interview

One of Coderre's biggest challenges was to rebuild public confidence in municipal politicians after years marked by corruption scandals involving forming mayors.

“As a joke, we have a record: you’ve had the same mayor for the last four years. He wasn’t sent to jail, there have been no investigation and things are working well,” he said in French on October 30 while visiting new buildings of the international biomedical company Green Cross Biotherapeutics in St. Laurent, a city within the Greater Montreal Area.

However, recent polls suggested his popularity was on the rocks. About 54 per cent of respondents of a Léger poll released on October 25 found that Coderre was arrogant. However, half of them also perceived him as likeable.

Roadwork and traffic were also central issues of the campaign with orange cones and detour signs dotting Montreal’s urban landscape.

After years of inadequate investments in Montreal’s roads, water mains and sewage pipes, Montreal’s auditor general warned that more needed to be done. This year, Coderre’s government spent a record $600 million to repair water infrastructure. Lionel Perez, the city’s executive committee member responsible for infrastructure said to the Montreal Gazette on October 28, 2017 that the city has gone from an average of 70 kilometres a year in road repairs to 300 kilometres this year.

A CROP-Radio Canada poll on October 30 showed voters considered the management of construction works the most important issue in the campaign with 48 per cent of respondents saying the issue was “crucial” and another 36 per cent saying it was “very important”.

But only 45 per cent of the same respondents trusted Coderre to deal with the issue compared to 54 per cent for Valérie Plante.

Coderre was himself late for a live interview on Puisqu’il faut se lever, one of Quebec’s most popular morning radio news shows, because he got stuck in traffic.

This interview was pushed back because Denis Coderre arrived late....due to traffic. https://t.co/BYOesMZwMo

Plante built her platform around trust and transparency. She promised that, if elected, the city would give residents more information about construction work.

One of her main promises was to create a new metro line, the “Pink Line” that would connect Montréal Nord, one of the lowest income neighbourhoods in the city, to downtown.

She said the stops on the line would be named after women and members of minority communities who have marked the city with positive contributions. In her speech, she also said that the city can't build new roads, but that it can build some new metro stations.

Coderre said, during the campaign, that this would lead to steep tax hikes. But Plante had insisted that Montreal needed a “vision” and ambition.

In the week before the election, three of Montreal’s main newspapers, Le Devoir, La Presse and the Montreal Gazette endorsed Denis Coderre.

Incumbents fared better elsewhere in the province, including in Quebec City where Mayor Régis Labeaume easily won a fourth term.

Marc Demers was re-elected in Laval, as was Yves Levesque in Trois-Rivieres and Maxime Pedneaud-Jobin in Gatineau.

There was a surprise in Sherbrooke, however, where incumbent Bernard Sevigny lost the mayoral race to independent candidate Steve Lussier.

Some 858 municipal elections were held across the province, with over 8,000 mayor or councillor jobs up for grabs.

Of those, about half were already filled by election day by candidates who ran unopposed.

Congratulations @Val_Plante on your historic victory today! I'm so excited for Montreal's future under your leadership! pic.twitter.com/Aodk4KuKGa

Quebec's Municipal Affairs Minister Martin Coiteux also had a busy evening on the phone, congratulating Plante and other mayors elected across the province.

Editor's note: This article was updated at 12:30 a.m. ET on Monday, Nov. 6, with additional quotes and details about the election.