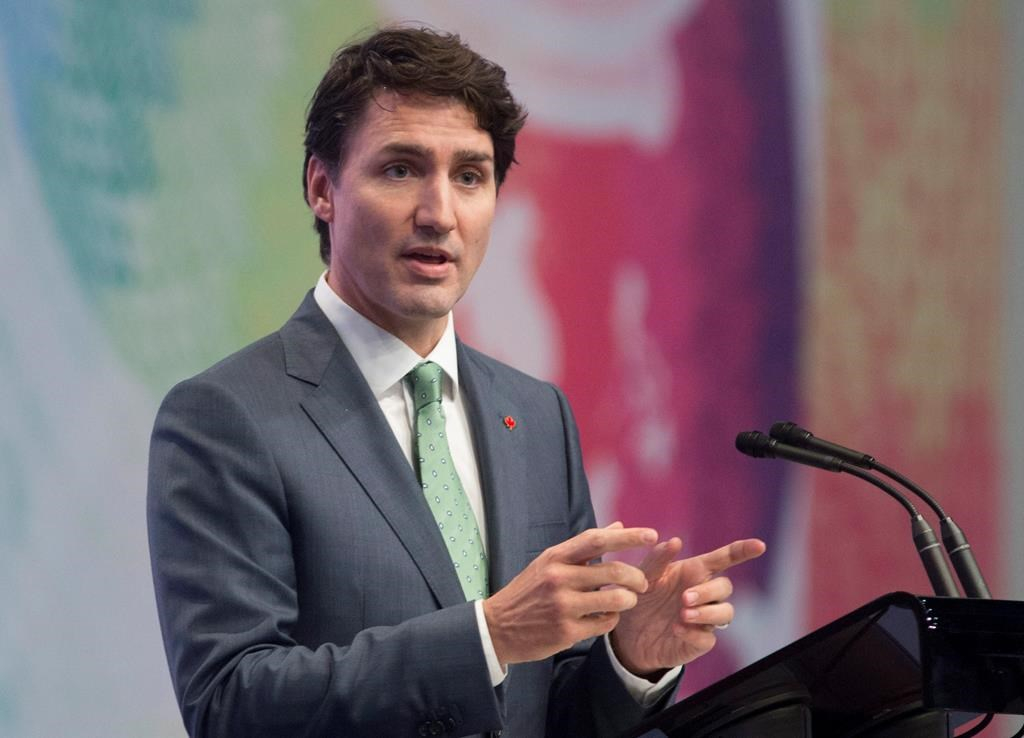 Canadian Prime Minister Justin Trudeau speaks with the media after participating in the Association of Southeast Asian Nations Summit in Manila, Philippines, on Tuesday, November 14, 2017. Photo by The Canadian Press/Adrian Wyld
Previous story
Next story

Ontario took another step Tuesday on the long road towards cleaning up mercury contamination upstream from the Grassy Narrows First Nation — a community that also wants the federal Liberal government to help generations of residents deal with the toxic aftermath.

Chief Simon Fobister cheered the Ontario government for a fiscal update that sets in motion a previously announced plan to put $85 million towards cleaning up the mess left behind by a paper mill that dumped the neurotoxin into the Wabigoon River in the 1960s.

Now, Fobister is setting his sights on Prime Minister Justin Trudeau's government, which he's been pressing to build a facility he calls a "mercury home" in the community so three generations of locals can get treatment for the effects of mercury poisoning closer to home.

"What has he done for us?" Fobister said of Trudeau, to whom he said he has reached out three separate times, never once receiving a reply.

"It has been documented so many times. I'm frustrated that Canada doesn't step up and deal with this national issue ... if industry poisons people ... it is a man-made disaster."

In a statement late Tuesday after the Ontario government tabled its fiscal update, Fobister applauded Kathleen Wynne's Liberals and urged her government to "honour its promises" by cleaning up once and for all the infamously polluted and remote site in northwestern Ontario, a 2.5-hour drive northwest of the city of Dryden.

The Toronto Star reported last week on a confidential 2016 report by an environmental consulting firm for the mill's current owner, Domtar, that showed the contamination continued to linger for decades and likely still does, despite repeated assurances from public officials over the years that there was no ongoing source of mercury in the river.

Fobister said the people of Grassy Narrows, including its children, continue to bear the physical and emotional scars of mercury contamination, and that the community needs specialized equipment to help people deal with the lasting impacts of poisoning.

"Some of our band members have disabilities caused by mercury and they need a place to stay to be watched out for, to ensure they are OK," he said. "One of my cousins, he can barely walk anymore."

Earlier Tuesday, Ontario Indigenous Relations Minister David Zimmer came under fire in the legislature for how his government has handled the controversy.

"We have a plan in place to deal with the mercury pollution at Grassy Narrows on the Domtar site," Zimmer said, noting that his department is reviewing the 2016 report, which suggests the province has known for decades about the problem.

"We are working with the ministry officials. We have committed to clean up the mercury site there."

That was cold comfort to local resident Judy DaSilva, an environmental health co-ordinator for Grassy Narrows who says she, too, feels the effects of the pollution.

"They've known all along and they have just played with us," DaSilva said of the province. "They don't view our lives as being valuable."

The problem has even caught the attention of international observers, including groups like Amnesty International and Human Rights Watch.

The current level of federal help Grassy Narrows receives to deal with its health issues is inadequate, given the chronic nature of the problem, said Richard Pearshouse, an associate director with Human Rights Watch's environment and human rights arm.

"In particular, children who are struggling to learn and people who are aging with the effects of mercury need more support," Pearshouse said. "Canada's federal government should finally admit to the mercury crisis in its own backyard, adequately support survivors, and assist these communities to recover."

The Prime Minister's Office did not respond to queries about Fobister's remarks Tuesday, but the office of Indigenous Services Minister Jane Philpott said Ottawa is helping the First Nation access expertise and information from federal departments on the issue of mercury contamination.

The office also said Ottawa is participating in discussions with the community and provincial partners to reform the Mercury Disability Board – a panel designed to implement terms of a settlement.

"It would be like, 'OK, the government believes you, you do have mercury poisoning, you are suffering,'" she said. "I feel like there is a general denial of us being poisoned."

This is SO FRUSTRATING!!! No

This is SO FRUSTRATING!!! No more reports, discussions, "expertise and information", etc. are needed!! All levels of government MUST FORCE the corporations to CLEAN UP THE MESS!!!