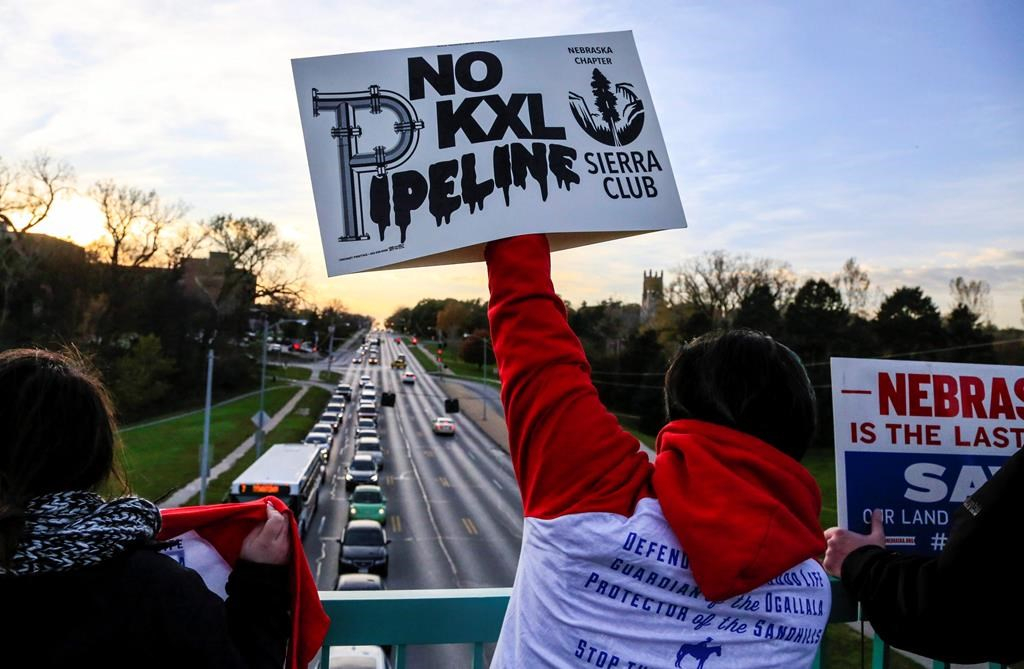 Opponents of the Keystone XL pipeline demonstrate on the Dodge Street pedestrian bridge during rush hour in Omaha, Neb., on Nov. 1, 2017. File photo by The Associated Press/Nati Harnik
Previous story
Next story

TransCanada said it was evaluating the decision by the state's Public Service Commission, which opted not to approve the company's preferred route and instead went for one that shifts the southern portion of the pipeline toward an existing pipeline route and away from sensitive ecological areas.

"We will conduct a careful review of the Public Service Commission's ruling while assessing how the decision would impact the cost and schedule of the project," said company CEO Russ Girling in a statement.

The Nebraska panel voted 3-2 to approve the project.

In a written decision, the panel said it was in the public's interest to put the new pipeline nearer to TransCanada's existing Keystone pipeline already running through the state to make it easier to monitor and respond to spills, to reduce impacts on endangered species and other benefits related to reduced conflicts.

Commissioner Crystal Rhoades, who voted against the project, said the alternative route still did not do enough to address her concerns, arguing the company should be forced to use even more of the existing Keystone I pipeline corridor by adding about 84 kilometres to the route.

"The applicant did not refute the landowners argument that using the existing Keystone I would avoid fragile soils, reduce impacts to endangered species, and avoid widespread controversy and opposition to this project."

The panel said in the decision that the alternative route was only eight kilometres longer than the preferred route, and that TransCanada had told the commission it was still a viable and beneficial route.

Still, those opposed to the pipeline jumped on the change by saying it could bring into doubt the future of the project.

"Today's decision is no guarantee that this pipeline will ever be built," said Greenpeace campaigner Mike Hudema in a statement.

"Nebraska opted not to give TransCanada its preferred route through the state, so the company now has more hurdles in front of its beleaguered pipeline."

Environmental groups and First Nations have also vowed to continue fighting the project.

"The fight is now on," said councilwoman Casey Camp-Horinek on behalf of the Ponca Tribe of Oklahoma in a statement.

"Keystone XL will never be allowed to cross Ponca territory. We stand in solidarity with our Northern Ponca relatives in this unified defence of Mother Earth."

Despite the opposition, the decision gives more certainty to the 1,900-kilometre pipeline that TransCanada has been working to develop for nearly a decade, Wood Mackenzie analyst Zachary Rogers said in a note.

He said the biggest beneficiary of the project would be Western Canadian oil producers by ensuring a cheaper, more efficient route to the Gulf.

"This is another step in our broader effort to bring more Alberta oil to the world, diversify our markets and maximize the value we as Albertans get."

The vote came as TransCanada continued to clean up a 5,000-barrel oil spill from its pipeline in nearby South Dakota that opponents have held up as a reason not to approve Keystone XL.

The commission, however, was prohibited from evaluating safety considerations, including risk or impact of a spill, and ruled instead on issues including regulatory compliance, economic and social impacts of the project, the potential intrusion on natural resources, and whether better routes exist.

Barack Obama rejected Keystone XL in 2015 after years of review, only for President Donald Trump to give the go-ahead to the project in March, saying the pipeline will bring jobs and reduce dependence on foreign oil.

"The commission, however, was

"The commission, however, was prohibited from evaluating safety considerations, including risk or impact of a spill and ruled instead on issues including regulatory compliance, economic and social impacts of the project, the potential intrusion on natural resources, and whether better routes exist."

Seriously?
That a project of such magnitude for danger, damage and environmental risk was NOT reviewed for these considerations is nothing short of irresponsilble. Considering the most recent leak on the doorstep of their decision reeks of industry manipulation.

This review was not objective, at all. At your peril, real Donald J.

I am not a supporter of

I am not a supporter of fossil fuels but until better cheap fuel alternatives exist, unfortunately they are still needed in some part of the world. including parts of North America. How would the Chinese provide fuel to their billion plus people? Wind farms? And what about their costs and time lines to build? As far as oil is concerned it is likely safer to be transported by pipelines than by trucks. So as long as that is true and as long as oil must go to markets, let's find the safest way to transport it. And minimise the environmental impacts.