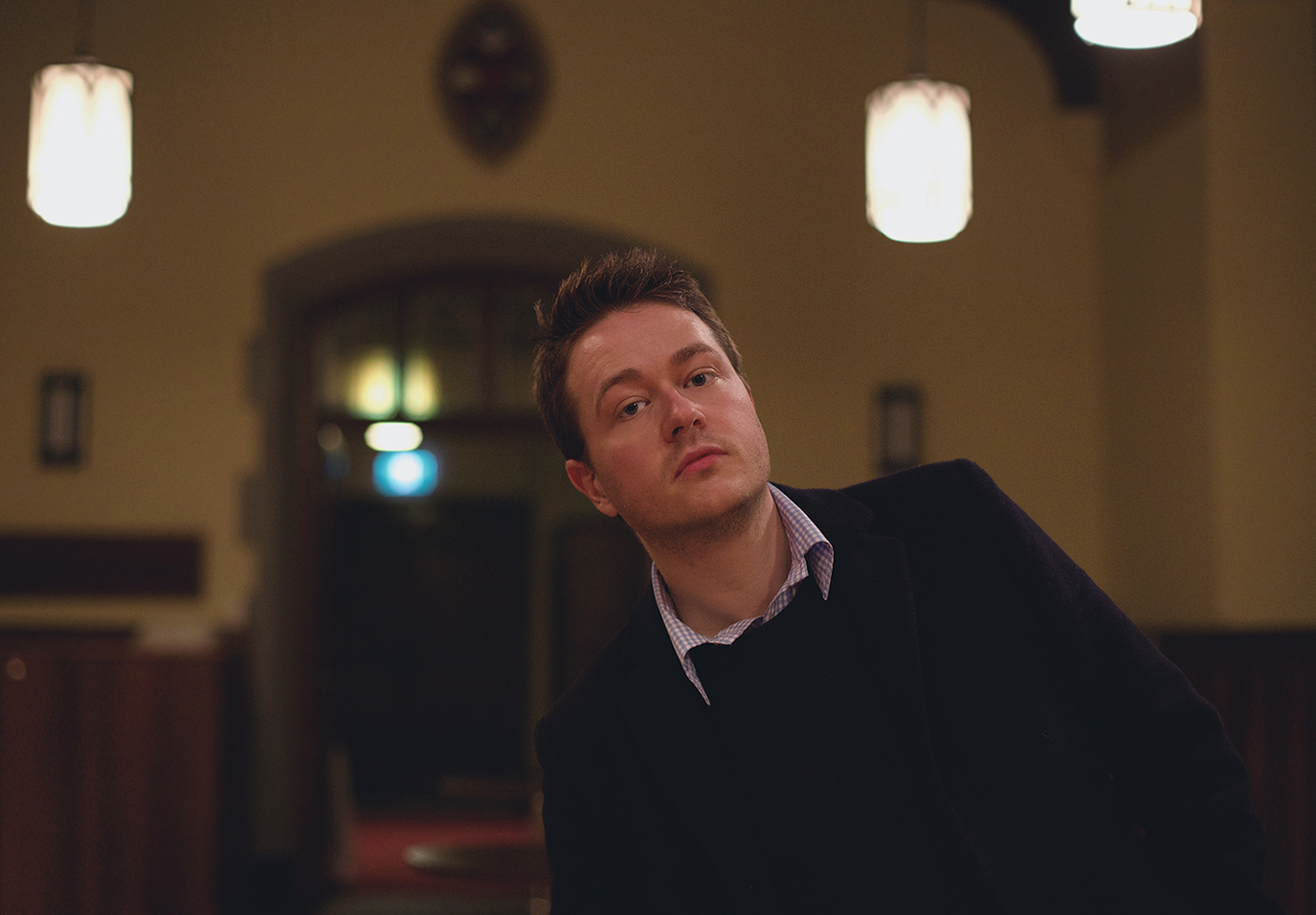 The 2015 book Chasing The Scream: The First and Last Days of the War on Drugs, is a New York Times bestseller. It's also a scathing account of the trillion dollar, global drug war's many policy failures. The book’s author, Scottish-born journalist Johann Hari, has traveled to over 18 countries to investigate drug criminalization. What he realized on that 30,000 mile journey is that almost everything he thought he knew about addiction was wrong.

"If you had asked me when I started doing the research, 'What causes heroin addiction?', I would have looked at you like you were an idiot," the author confesses to the audience. "I would have said, 'Well, the clue's in the name, dummy. It's called heroin addiction, it's obviously caused by heroin'." We've been told this story so often, Hari says, that it has become part of our common sense.

The author's talk was a paean to Vancouver's Downtown Eastside which he encouraged the audience to be tremendously proud of. Hari relayed the deep impact the community had on him both professionally and personally. "I'm genuinely glad to be here because coming to the Downtown Eastside changed my life and taught me some of the most profound lessons I've ever learned."

In his youth, Hari once attempted to revive a relative of his who had been using drugs, but the relative never woke up. That pain repeated itself when an adult Hari realized the depths of a partner’s heroin and crack-cocaine use. He wanted to understand addiction, and this book was how he would do that.

Hari began writing when the 100-year anniversary of the first ban on drugs in 1914 was approaching: he was looking for answers to what he called, “really simple” questions including "Why did we go to war against people with addictions a hundred years ago? Why are we carrying on when it doesn't seem to work?" and, "What really causes addiction?"

The importance of connection

Here in Vancouver was where Hari first witnessed key breakthroughs in his understanding of addiction. The first provided the answer to what truly causes addiction.

The initial studies done on heroin, early in the 20th century, determined that the drug itself induced the compulsion. "You take a rat, you put it in a cage, and you give it two water bottles," Hari renders. "One is just water, and the other is [laced with] either heroin or cocaine. If you do that, the rat will almost always prefer the drugged water and almost always kill itself quite quickly," as a result, Hari said.

Vancouver's own Dr. Bruce Alexander, a retired professor of psychology at Simon Fraser University, told Hari that the more people he worked with on the Downtown Eastside, the more it occurred to him that there was something missing in these earlier studies.

"They're putting this rat alone in an empty cage, [with] none of the things that rats need to have a good life; they've got nothing to do except these drugs." Dr. Alexander replicated the experiment, but with a bigger cage, famously termed Rat Park, a ‘heaven for rats’, dubbs Hari. They're given others to socialize with, a partner to mate with, plenty cheese, and a couple balls to keep them active. "In Rat Park," notes Hari of the water bottle fortified with morphine, "none of them use it compulsively, and none of them ever overdose."

They went from almost 100 per cent compulsive use and overdose to none, says the UK journalist.

Hari makes sure to note that we can't rule out the chemical aspect of addiction. Certain drugs, he says, hook onto brain receptors that exist for our natural neurochemicals, but this is only a tiny fraction of the picture, he asserts. When nicotine patches became commercially available in the early '90s, people were optimistic about a reduction in smoking. A nicotine patch, Hari says, delivers "all of the chemical equivalent" as smoking a cigarette does. Although some critics contest the experiment's results, the overall findings that addiction is rooted in more than just the chemical component of a drug resonated with a wide audience.

One of the core theories the War on Drugs is based on is that people with addiction need to be punished and made to suffer in order to give them the "incentive" to stop, Hari says. "But once you understand that pain is the cause of addiction, says Hari, you understand why inflicting more pain doesn't just, not work, it actually makes the problem worse."

Describing his visit to an Arizona prison, Hari says the inmates were "absolutely terrified of something called ‘The Hole’. When shown this solitary confinement center by a prison guard, he saw a woman alone in a concrete cell with no windows and a single toilet. Trying to relay the magnitude of the horror he felt from this place, Hari describes the moment he realized this 'Hole' was, the closest thing [he'd] seen to a “literal, human reenactment of the cages that guaranteed addiction in rats,” he says. "And this is what we're doing to these women thinking it will stop them from being addicted."

In person, the multiple award-winning journalist is surprisingly lighthearted and humorous for having covered such heavy subject matter for so many years. Hari details for the crowd a decades-old conversation between Portuguese Prime Minister and the leader of the opposition at the time. Realizing their country's crime surge couldn't go on, they "decided to do something super radical: something nobody had done in 70 years." Hari mimics them in a comical, air-headed tone: "Should we, like, ask some scientists and experts and stuff?", to which the audience erupted in laughter.

Telling this story of how Portugal significantly decreased what was once an unraveling problem in the year 2000, Hari continues in a more serious tone. By following the US model of increased arrest and imprisonment, they watched the problem get worse every year. So when those leaders hired experts whose panel made recommendations based on Dr. Bruce Alexander's Rat Park study, they decriminalized all drugs, "from cannabis to crack. The whole lot." Hari says.

The essential next step was to spend all their prosecution money on turning drug users lives around. Housing initiatives and microloan programs were created so people could start businesses from the things they cared about. "The goal was to say to everyone with addiction in Portugal," Hari says, "we value you; you've got as much right to a good life as anyone." When he arrived in Portugal 13 years later, drug injection had fallen by 50 per cent. Overdose deaths, HIV transmission, and street crime had all "massively" declined, he recalls.

Hari describes how at the same time, a similar story was unfolding in Switzerland: crackdowns had resulted in increased problems. Oscillating between author and comedian, Hari emphasizes that the Swiss aren't particularly liberal, "[they're] obsessed with order," he teases.

Still yet, under the country's female president Ruth Dreifuss, Hari chronicles how the Swiss established therapy programs, job assistance, housing, and safe injection sites. "They give you the drug you're addicted to in the [purest] possible form", as well as a means to "figure out why you're in such pain, and to deal with the causes of pain." There was no pressure to cut back or stop the program, yet almost everyone does, Hari informs his listeners.

"Legalization is the way to restore order to this chaos," Hari quotes of president Dreifuss upon stepping over the threshold at the beginning of the millennium.

Portugal, Switzerland (and even Sao Paulo, Brazil where Hari also visited) succeeded in reducing crime and addiction by dealing with the underlying causes of the pain, the reporter says. "And that's what we need to be thinking about".

The UK columnist details how a large proportion of Canadian women take drugs to treat depression. He notes that an extraordinary amount of people are "drugging themselves to get through the day." And the pain goes deep, he urges.

The well-researched journalist brings up Vancouver's renowned Dr. Gabor Maté, a physician who worked with The Portland Hotel Society. After listening to his patients (an anomaly in typical medical care), Maté described to Hari how he realized, "everyone at the PHS had been damaged horribly, long before they found their drug. The drug was an attempted solution to this very deep trauma."

Hari's talk includes a handful of personal stories as anecdotes to confirm Maté's theory. Recounting a woman in San Diego who had succeeded in a weight-loss program that cut back her overeating, Hari says she reached a healthy 150 pounds. But when she was hit by her partner, her binge eating returned. The doctors questioned when she first started to gain weight, and she replied: 12 years old, Hari recalls. When they pressed what else happened at that time, she answered, "Well, that was when my grandfather started to rape me."

In the 1990s, a woman named Liz Evans was working in a Downtown Eastside psychiatric unit. She realized that people were being thrown out of their housing for drug use. "Nobody's going to stop being addicted under a bridge - that's when [the addiction] is going to spiral," Hari recounts his meeting with Evans. She suggested unconditional housing, but authorities reacted badly.

One woman was given a room after being thrown out of housing for using drugs and selling sex, Hari recounts. "She would often come back beaten up, and she would tell Liz, 'I deserve this'." Her youth was spent cycling through foster care; one family starved her for a whole year and told her she was "diseased." Evans thought this woman had been punished enough, told her she didn't deserve to be beaten, and then just listened. "No one had ever said, 'tell me about your life, tell me about your pain'," Hari says.

The visiting correspondent proclaims that through the lens of the War on Drugs, "that story is a failure: [she] never stopped using drugs." The woman passed at 48. "But if you see it from a different perspective, it's a success. She didn't die on the streets ... She died in a room she was really proud of, reunited with her family on the Reservation where they took her [from]; she died surrounded by people who kept telling her they loved her. I don't think that's a failure, I think that's a success."

Addiction isn't a pathology, but more a grab at a solution, Hari maintains.

It's this insight that came from the Downtown Eastside and the work of those fighting for decency and human rights for people who have already been traumatized enough, that has resulted in such dramatic changes around the world Hari tells us. He reminds his Vancouver audience once again that we should be proud of our home. "The Downtown Eastside was a pioneer of Harm Reduction," Hari praises.

"I was told that, apparently in nature, the antidote is always found very close to a poison: they evolved together, they're twinned. Here in the Downtown Eastside, we see the wound most clearly," Hari says, "but we also see the beginnings of solutions, answers, and understanding; the way out of this."