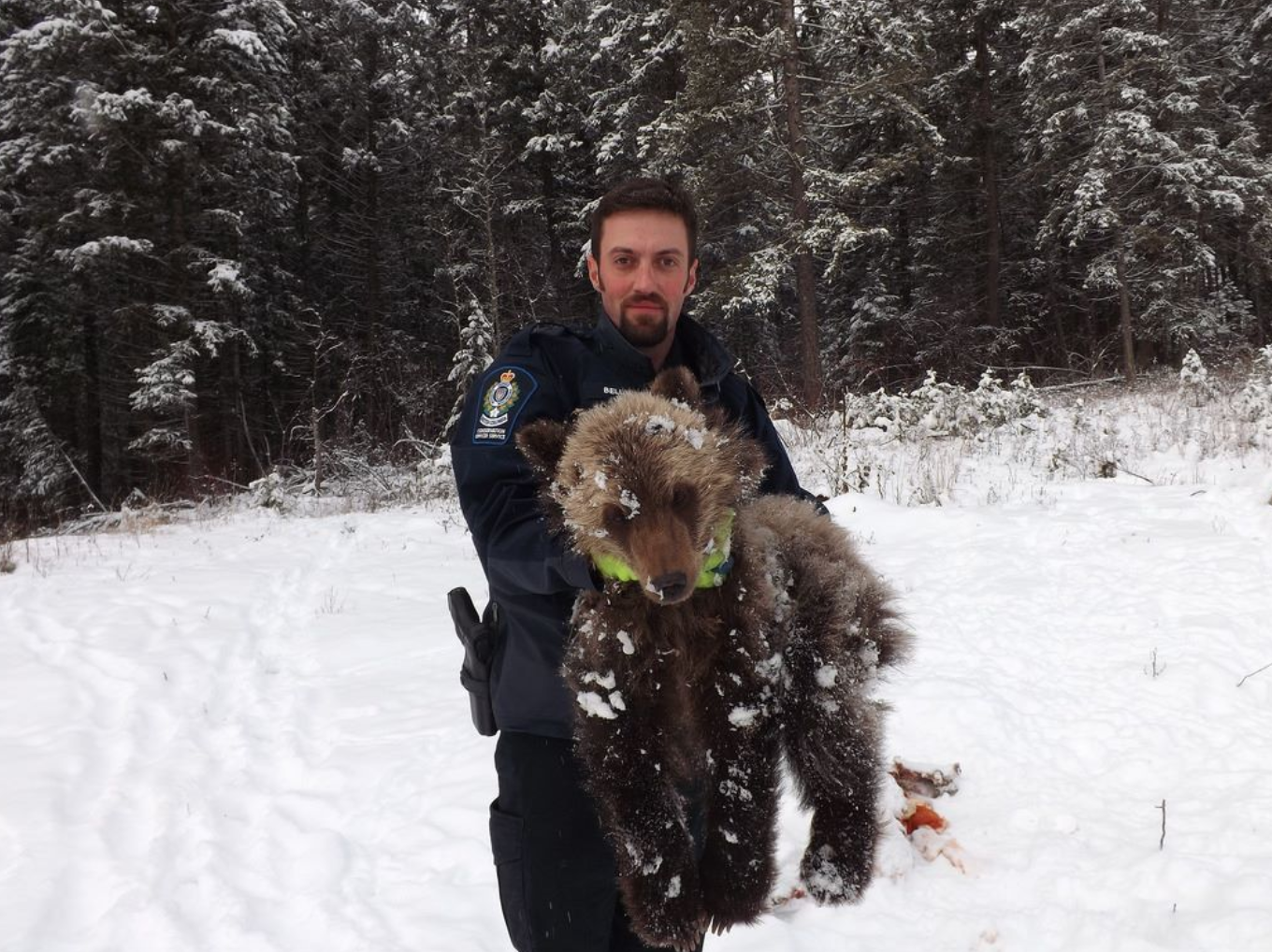 The B.C. government took down a job ad featuring this conservation officer posing for a photo with an unconscious grizzly cub. Screenshot from Conservation Officer Service Facebook page
Previous story
Next story

The British Columbia government has yanked a recruitment ad for conservation officers that promises a chance to "tranquilize a grizzly bear" and get paid to "be up close and personal" with the iconic creatures.

The ad featuring a member of the B.C. Conservation Officer Service (COS) posing with an unconscious bear cub in his arms — was posted to the COS Facebook page on Nov. 14, edited, and removed on Dec. 5 when National Observer started asking questions about it. It reads, in part:

"Want to tranquilize a grizzly bear? Have you ever wanted to be up close and personal with a live grizzly and get paid for doing it? Well now's your chance. You could be the next BC Conservation Officer who responds to human wildlife conflicts keeping our communities safe."

The COS is the province's primary wildlife safety provider. COS officers are charged with natural resource law enforcement, and human wildlife conflict prevention and response.

The ad sought to recruit new members, but promptly sparked outrage from environmental and animal welfare advocates, who said it glorified shooting bears, resembled a trophy hunting photo and deliberately targeted recreational hunters. They voiced their concerns in a letter to the B.C. government last week. The province has not responded to them.

In an emailed statement to National Observer, the B.C. Ministry of Environment said the COS recognizes "that the image in the Facebook post can be distressing to some people." It removed the ad, but emphasized that the grizzly cub featured in the photo was tranquilized, and the photo provided a "realistic glimpse to this part of the job." The bear cub was brought to a rehabilitation centre and later released into the wild.

Tranquilized or not, the bear ad "sends all the wrong messages" for an organization whose focus is preservation and protection, Lesley Fox, executive director of the Association for the Protection of Fur-Bearing Animals (APFA) said in an interview.

According to B.C. government estimates, upwards 700 black bears are killed by conservation officers annually throughout the province. This year, nearly 500 bears were killed due to conflict with humans, 27 of which were grizzlies.

The COS is a taxpayer-funded agency, and to imply in an ad that officers can get paid to discharge weapons — regardless of what they're armed with — is inconsistent "with public trust for armed officials," said Fox. Like cops, conservation officers have badges and firearms that kill, but unlike cops, they are not regulated by the Police Act. The agency's regulatory oversight is internal and it has no independent review board.

"I would argue, lethal or non-lethal, you’re promoting shooting," said Fox. "The emphasis is on gun culture... It’s really alarming to post in a public forum so casually."

The grizzly bear is a contentious animal in B.C., where for decades, hunters have been permitted to kill them for sport. The practice was widely condemned throughout the province, but defended and protected by the former B.C. Liberal government, which touted the income brought in from hunting permits and a number of sustainability measures that prevented over-hunting.

In August however, NDP Premier John Horgan announced an end to trophy hunting B.C.'s grizzly bears, and a total ban on hunting grizzlies in the coastal Great Bear Rainforest. Two months later, Environment Minister George Heyman told The Globe and Mail that his department wants to "restore and increase transparency and public confidence in our ability to protect our natural environment, starting with this iconic species, the grizzly bear."

The environment department also declined to confirm whether the ad targets, or could be perceived to target, hunters as potential recruits, or whether hunting experience is valued in the COS hiring process.

"Each recruitment post on Facebook is designed to give prospective applicants an idea of the broad range of responsibilities of a conservation officer," said its statement. "Part of the evaluation process for prospective employees includes ensuring values align with the role of a conservation officer – a desire to protect B.C.’s environment, and fish and wildlife resources, is essential."

Fox alleged there's a conflict of interest when recreational hunters become conservation officers, as it places the care of B.C.'s wildlife in the hands of those who kill animals as a pastime.

Jesse Zeman, director of fish and wildlife restoration at the BC Wildlife Federation, however, said hunters care deeply for the environment and are a natural fit for the COS. Zeman is a hunter himself and wrote his undergraduate thesis on hunter intentions and motivations.

While it could indeed disturb a bear lover, he said the Facebook post does not appear to target hunters, who would not find 'tranquilization' appealing.

"That’s not the message they’re trying to deliver. I think they’re trying to show that the job is not all about dispatching wildlife," he told National Observer. "I do feel like certainly the conservation officers that I talk to certainly feel a lot of scrutiny around what they do and how they do it. Euthanizing wildlife is not why they get into the job and it’s not what they like doing."