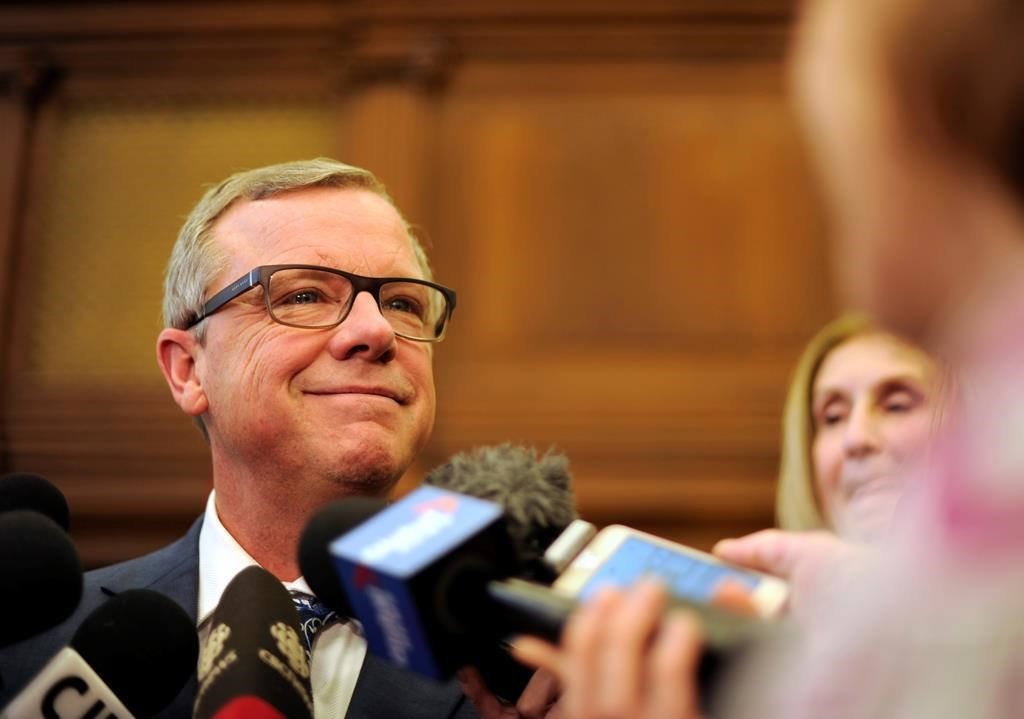 There were tears and tributes as Brad Wall bid farewell to the Saskatchewan legislature Thursday and looked forward to the next chapter of his life as "just Brad" after a decade as premier.

Wall gave his final speech to the house after an hour of memories and praise shared by colleagues and opponents alike. Wall is retiring next month after holding the Swift Current seat for the Saskatchewan Party for almost 20 years.

Wall reminisced about giving up his private identity for a public one when he first ran for office in 1999. He said he never lost a feeling of awe when he walked through the front doors of the legislature to represent his community.

"I have been humbled and blessed with the honour of my working life," Wall told his colleagues and many guests sitting in the gallery.

"I've gotten too much credit for the good things and not enough blame for the bad things. I'm so grateful to my colleagues and my family."

He said the names on the doors of ministry offices change, but the institution of democracy will remain. After almost two decades as the MLA for Swift Current and then premier of "the province that I love," Wall said he's looking forward to exchanging the titles for "just Brad."

"Just Brad, the proud and very thankful son of John and Alice Wall, the profoundly and immensely proud dad of Megan and Colter and Faith. Just Brad, the unworthy husband of the amazing Tami Wall," he said tearfully.

"As it was 18 years ago, I want this trade. I am grateful for it and I'm excited about the prospects that will follow."

Wall announced in August that he was retiring, saying he believed renewal would be good for the Saskatchewan Party and the province. He is staying on as premier until his successor as leader is chosen Jan. 27.

He was first elected as a member of the legislature in 1999 under the banner of the newly formed party and made a successful bid for the top job after the party lost the 2003 election.

He would go on to lead the party to three consecutive victories, starting in 2007, and most recently in 2016 by winning 51 of 61 seats.

The party, which formed 20 years ago out of an alliance of disaffected Tories and Liberals, took more than 50 per cent of the popular vote in each of the contests.

"It's hard to imagine the Sask. Party without Brad Wall," interim NDP Leader Nicole Saurer said as she paid tribute to her opponent's charisma and dedication to public service. "Mr. Wall will not soon be forgotten."

Over the years Wall became one of Canada’s most high-profile premiers. He rose to national prominence for his down-to-earth style, sharp wit and, more recently, his willingness to lock horns with Ottawa.

In May, a poll suggested Wall's party had dropped steeply in voter support and had fallen nine points behind the leaderless Opposition New Democrats.

With trouble at home, Wall trained his political guns afar. He railed against opposition to pipeline projects and criticized Prime Minister Justin Trudeau over the federal government’s plan to force provinces to put a price on carbon, pledging to fight the move in court if necessary.

Saskatchewan's carbon plan introduced this week does not include a tax or price.

Colleagues remembered him not only as a formidable political force but a friend. Deputy premier Don Morgan said Wall knew his MLAs personally — who had health issues, who were caring for elderly parents or small children.

"He cares and it shows," Morgan said. "His humour and kindness are special."

Wall told the house that there is a sign hanging above the door of the cabinet room which asks: "Did you leave things better than you found them?"

He pointed to new schools, new hospitals, the hiring of more nurses and the welcome given to newcomers to the province during his tenure.

"Things are better than when we found them," Wall said. "There is still more work to be done."