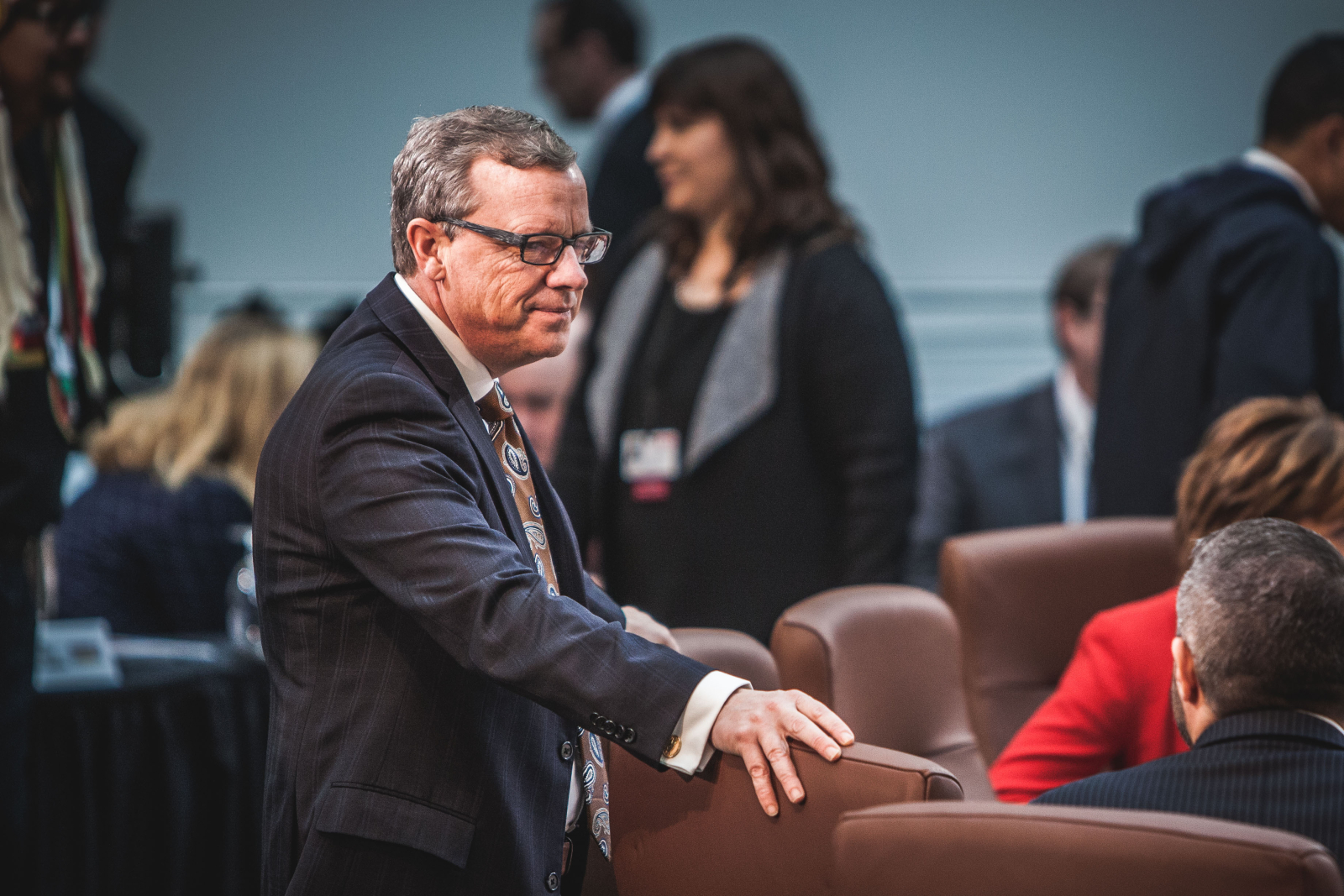 Saskatchewan Premier Brad Wall is refusing to apologize for a serious accusation made by his government against Burnaby after getting a letter from the British Columbia coastal city's lawyer.

On Nov. 3, the provincial government accused the City of Burnaby of "deliberately slowing down" permits needed by Texas-based Kinder Morgan to build the Trans Mountain pipeline expansion project.

Burnaby's lawyer said in the letter that this accusation was "misinformed" and asked Saskatchewan to retract the comments.

On Monday, Wall admitted that the allegation, made by his attorney general, Don Morgan, was actually raised by the pipeline company and that his provincial government was trying to support the oil and gas industry.

"It is the view of the Trans Mountain pipeline proponents that the city is unnecessarily holding up the pipeline," said Wall in a message posted on Twitter. "Saskatchewan has long held the view that for an interprovincial pipeline, once federal approval has happened, as it has, in the case of Trans Mountain, then provinces and municipalities shouldn't be standing in the way."

The @CityofBurnaby is asking for SK to apologize for saying they're unnecessarily delaying fed-approved @TransMtn pipeline. We will not. pic.twitter.com/rayJaXaPOZ

The statement from Wall came after his own government had rejected a deadline proposed by Kinder Morgan and requested more time to present arguments in a legal challenge launched by the pipeline proponent to have the National Energy Board (NEB) quash Burnaby's municipal bylaws to speed up the construction process for the Trans Mountain expansion.

Until last Friday, Wall's government, traditionally a strong defender of the oilpatch, had been uncharacteristically silent about the case. Kinder Morgan filed its legal motion against Burnaby on Oct. 26. The NDP government of Alberta Premier Rachel Notley, meantime, has been publicly urging the NEB to intervene.

The legal back-and-forth is part of the latest maneuvers surrounding the controversial pipeline project that has sparked a bitter political debate about the future of Canada's oil and gas industry.

The NEB has the powers of a federal court and can therefore quash the constitutional powers of B.C. and Burnaby if it agrees with the company's arguments that the provincial and municipal governments are deliberately obstructing the permitting process.

If built, Trans Mountain would be able to ship up to 890,000 barrels of oil per day from Alberta to the Vancouver region, dramatically increasing oil tanker traffic off the coast through an area inhabited by endangered killer whales, while giving oil companies new access to potential markets in Asia.

Prime Minister Justin Trudeau's government approved the Kinder Morgan pipeline last November, subject to 157 conditions. His cabinet determined that the project was in the public interest to support jobs and growth in the oil industry, which has been slumping since global commodity prices plummeted in the fall of 2014.

Opponents, including B.C., Burnaby, First Nations and environmental groups, say the project wasn't worth building due to economic and environmental risks. But both Burnaby and the B.C. government, led by NDP Premier John Horgan, have insisted that they are running a fair approval process for permits needed for the project.

Wall noted in his statement that it was important to build the pipeline since it would give Canadian oil companies new potential customers. This would give industry a higher price than what they are currently getting from customers in the United States, which is a destination for almost all Canadian oil exports.

In his carefully-worded message, Wall also said that his government wanted to defend the energy industry.

"I guess the mayor of Burnaby, has, today, asked for the Government of Saskatchewan to apologize for this action. We will not," Wall said.

"I will never apologize. We will never apologize for standing up for the interests of the energy sector. It is a benefit, that sector, not only to our province, but to this entire country, and it's important that we send a strong signal to those who are working in that energy sector, those who are risking dollars in that sector, even now as it's gaining some strength again, that the Government of Saskatchewan will stand with them. So we also stand by this intervenor action."

Kinder Morgan itself has been ordered by the NEB to stop some of its construction activity after it began some work on seven waterways, without having the required federal approvals to proceed. It told the NEB that it was in a rush to proceed with that work to avoid several months of delays that would stop it from starting the expanded pipeline network by the end of 2019.

Meantime, Burnaby's lawyer said in the letter that the city was proceeding with the regulatory process in good faith.

Previously, the city has said it couldn't issue the necessary permits to allow Kinder Morgan Canada Ltd. to expand its pipeline from the Edmonton area to a tank farm and port in Burnaby, near Vancouver, since the company hadn't completed what was required.

City officials say it is inappropriate for Saskatchewan's attorney general to prejudge a matter because the statements "may have the effect of influencing" a court or regulatory tribunal.

Burnaby's letter to Morgan, which is dated Nov. 6, says as Saskatchewan's senior legal representative, he should be impartial in the administration of justice.

"The City of Burnaby regulatory process has been applied in good faith, as the evidence will readily show in the motion before the NEB," the letter says, adding the city believes it and its professional staff are owed an apology.

"We would ask that you reconsider the propriety of your comment, and withdraw it on the record."

Kinder Morgan has applied to the energy board for an order allowing work to begin without permits from Burnaby on the $7.4 billion project, and has also applied for an "expedited determination" to resolve similar problems in future.

Saskatchewan wants to do 'right thing' for Canada

Speaking to reporters on Monday, Morgan refrained from repeating the comments that he had made in the Friday statement.

"We want to see the process go ahead as much as they can," said Morgan. "I'd urge the City of Burnaby to sit down and focus on what they can do to speed up their process as much as they can... We're looking at what is the right thing to do for Canada and for western Canada and that is getting our oil to tidewater. It goes through two other provinces as it leaves here. So we want to see that it takes place."

Morgan added that the government was also intervening because it was worried about what happened with other pipelines and energy projects that were recently cancelled such as TransCanada's Energy East pipeline, which was terminated by the company in October.

British Columbia and Alberta have joined Saskatchewan in requesting intervener status at the hearing. B.C. Environment Minister George Heyman said last week that Kinder Morgan's recent actions to proceed with activity, without getting required approvals, is "reprehensible" and that the regulator should reject the company's latest request.

Kinder Morgan officials have said delays in the project have the potential to cost millions of dollars and push the expansion nine months behind schedule or cause the project to fail.

The company has also urged the NEB to create new rules to fast-track any future arguments it makes about delays from provincial or municipal regulations. but the B.C. government, in its legal response to the NEB, that granting this request would be an abuse of process.

with files from Beth Leighton, The Canadian Press

Let's make BC carbon free by

Let's make BC carbon free by 2018. Turn off the other Kinder Morgan pipe. Block anything BC tries to ship east.

It is true. Brad Wall is a

It is true. Brad Wall is a true friend of the oil patch, even when it kills and poisons Saskatchewan people. His government has consistently failed to implement legislation that would hold energy corporations responsible for the damage they do by requiring reasonable reparations. The same can be said, of course, for Alberta, and for British Columbia when it comes to mineral extraction operations throughout the province. We need to ask more from our governments when it comes to protecting the interests of ordinary people, in balance with also supporting extraction industries. It can be done in a responsible way, we just need to insist on it.

IT is unfortunate that Mr