Feds to give provinces 75 per cent of pot tax revenues, own take capped at $100M 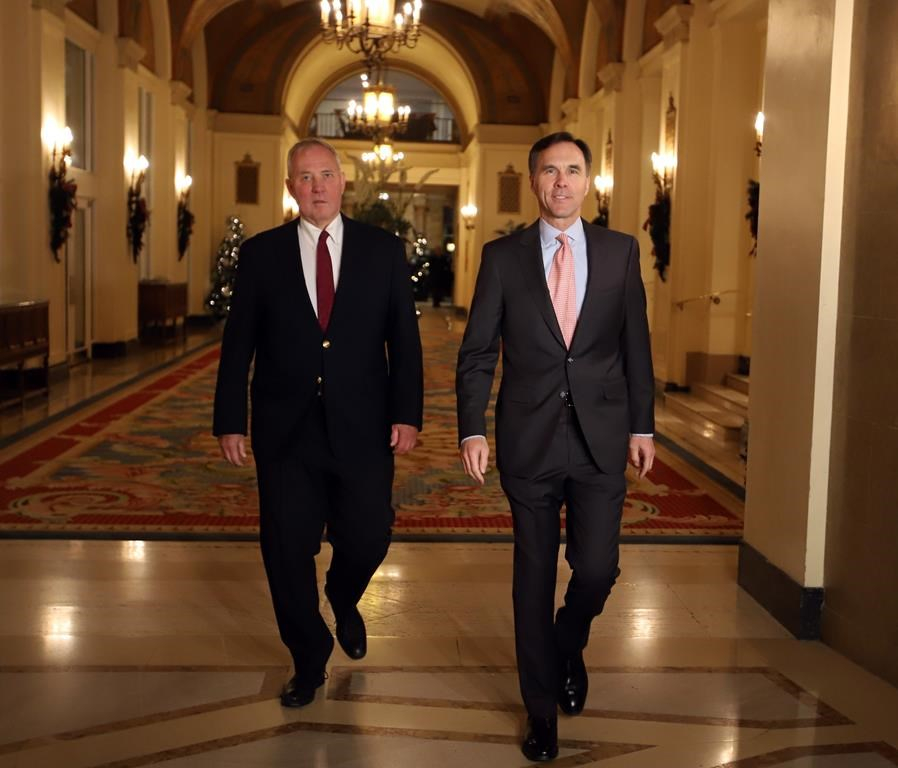 Bill Morneau and Bill Blair make their way to talk to reporters before joining their federal, provincial and territorial counterparts for dinner in Ottawa, on Dec. 10, 2017. Photo by The Canadian Press/Fred Chartrand
Previous story
Next story

Canada's finance ministers struck a deal Monday on how they plan to share tax revenues during the cost-heavy startup phase of a legalized marijuana market — but they also kept their options open, just in case lucrative days lie ahead.

The new agreement will see the federal government give the provinces and territories a 75 per cent share of federal excise tax revenues from the sale of legalized pot, a portion of which will be meted out to cities and towns to help them defray the cost of making cannabis legal across Canada.

Federal Finance Minister Bill Morneau announced the two-year deal after a day-long meeting with his provincial and territorial counterparts.

Ottawa, which intends to legalize recreational cannabis in July, will retain the remaining 25 per cent share to a maximum of $100 million a year, with any balance over and above that limit going to the provinces and territories.

Over the first couple of years, ministers predict legalized marijuana will involve significant startup costs, such as the creation of the new pot market itself, beefed up enforcement, public-awareness campaigns and additional health services.

Morneau said that in each of the first two years, he expects legalized pot to generate only about $400 million in excise tax revenues. Ministers doubt the funds will be enough to cover their startup costs.

But after that, Ontario Finance Minister Charles Sousa suggested there's potential for the brand new market to generate far more for public coffers.

"Going forward, we know that there is demand for cannabis — there's quite a bit already and the illicit market is rather huge," Sousa said after Monday's announcement.

"The federal government has estimated around $400 million or so in revenues in the first year or two years — it may grow and it likely will grow substantively.

"So, we want to take the appropriate measures now to combat the illicit market, get it out of the system and then go forward... to deal with revenue."

Sousa added that the $100-million cap on the federal share is an important piece of Monday's agreement because now, "if there is a surge in the marketplace, we can accommodate it more effectively as we grow and respond to that marketplace."

Canada's federal, provincial and territorial governments have long insisted that legalization is not about revenues. They say the priority is about protecting kids and taking weed profits out of the black market.

Morneau said the decision to provide a larger share to the provinces will allow them to "fairly deal with their costs" and enable them to work with municipalities, which had been asking for at least a one-third portion of the revenue to help ease the local burden of costs like law enforcement.

To eliminate the illicit market, the ministers agreed to keep the per-gram price of legal pot at roughly $10, or even lower.

"Our expectation is that by keeping prices low, we will be able to get rid of the black market. However, that will happen over time," Morneau said during the closing news conference, his counterparts lined up behind him.

"Of course, we'll stay very much on top of this."

He said the ministers are scheduled to gather again a year from now to assess how the framework is working.

Quebec Finance Minister Carlos Leitao said the introduction of safety, prevention and distribution costs will require considerable investments that won't be covered by his province's estimated $60-million share of excise tax revenue in each of the next two years.

"In the first couple of years, we will not be making money on this," Leitao said.

The original model put forward by the federal government proposed an even 50-50 split, a plan that was immediately shot down by the provinces, many of which wondered aloud what sort of costs Ottawa would be incurring to deserve such a share.

Earlier Monday, Sousa said the federal Liberal government had successfully made the case that it, too, would have costs, but was showing flexibility on related revenue and cost-sharing questions.

Morneau said Monday that the federal government has already committed more than $700 million over the coming years towards pot legalization in areas like policing and border security. He added he expects that number to rise.

During the meetings, the ministers also discussed the federal government's proposed tweaks to the formula behind equalization payments, as well as the three-year review of the Canada Pension Plan. They also explored the state of the global economy and heard a presentation from Bank of Canada governor Stephen Poloz.

Talks also took place on a national strategy to improve the sharing of information on corporate ownership between jurisdictions, a measure designed to clamp down on tax avoidance, tax evasion, money laundering and terrorist financing.

Provinces confront Morneau in feud with feds over marijuana-proceeds pot

Federal marijuana legislation approved by Commons, moves on to Senate