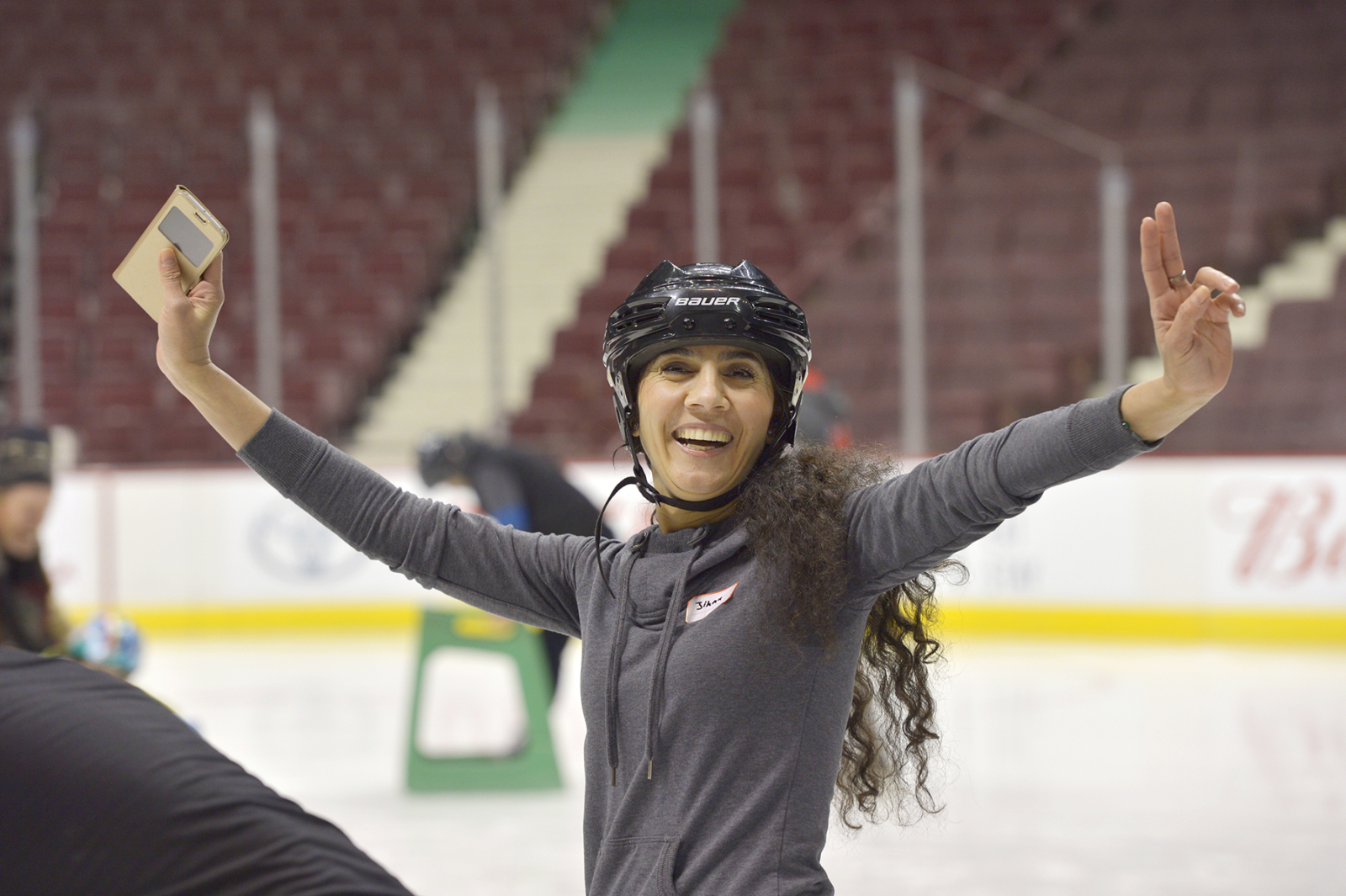 Refugee youth and families after a skate at Rogers Arena in Vancouver. Photo by Andrew S. Wright
Previous story

Roughly 40 refugees were introduced to Canada's favourite pastime on Wednesday, as they hopped over the visitor's bench to skate around a Vancouver ice rink.

They passed through hallways plastered with Vancouver Canucks signs at the Rogers Arena, and set foot on the same ice as professional hockey players.

“There’s a lot of hard stuff that refugee families have to go through,” said Elmir Ismayilou, who works with the Volunteer Community Connections Program at the Immigrant Services Society of British Columbia (ISSofBC).

“There’s so much paperwork, getting documents, going to interviews. We want to make sure that they get the fun stuff, too.”

The ISSofBC is British Columbia’s oldest nonprofit immigration services organization. To help new families settle in, they pair refugees with Canadian volunteers who can aid the transition to a new, strange country where people slide around on metal blades.

"Until refugee families set out on their own, they can stay at the ISSofBC Welcome Centre on Broadway and Victoria Drive. Here, in a building that can house up to 138 people, they learn the basics of life in Canada and receive support as they look for work and permanent housing.”

“What do Canadians do? Where do I shop? Where can I get something?” Ismayilou said. “Events like this are important because we see it as an important part of their cultural integration.”

Vancouver Parks and Recreation staff were also on hand to help fit skates and give impromptu lessons to families — mainly from Syria, Iraq, Sudan, Somalia and Eritrea — that have recently come to Canada.

“Skating is such a culturally Canadian event,” said Mike Magee, a former chief of staff to the Vancouver mayor and one of the event’s hosts. “It’s important to have people helping [refugees] not only look for housing and bare necessities, but also have fun,” he said.

It’s the second year in a row that the Canucks organization has welcomed refugee families to Rogers Arena, blasting Christmas music from the speakers and handing out souvenir Canucks pucks.

“They’ve been great,” Magee said. “When I said it was for ISSofBC, they were like, ‘What do you need?’” 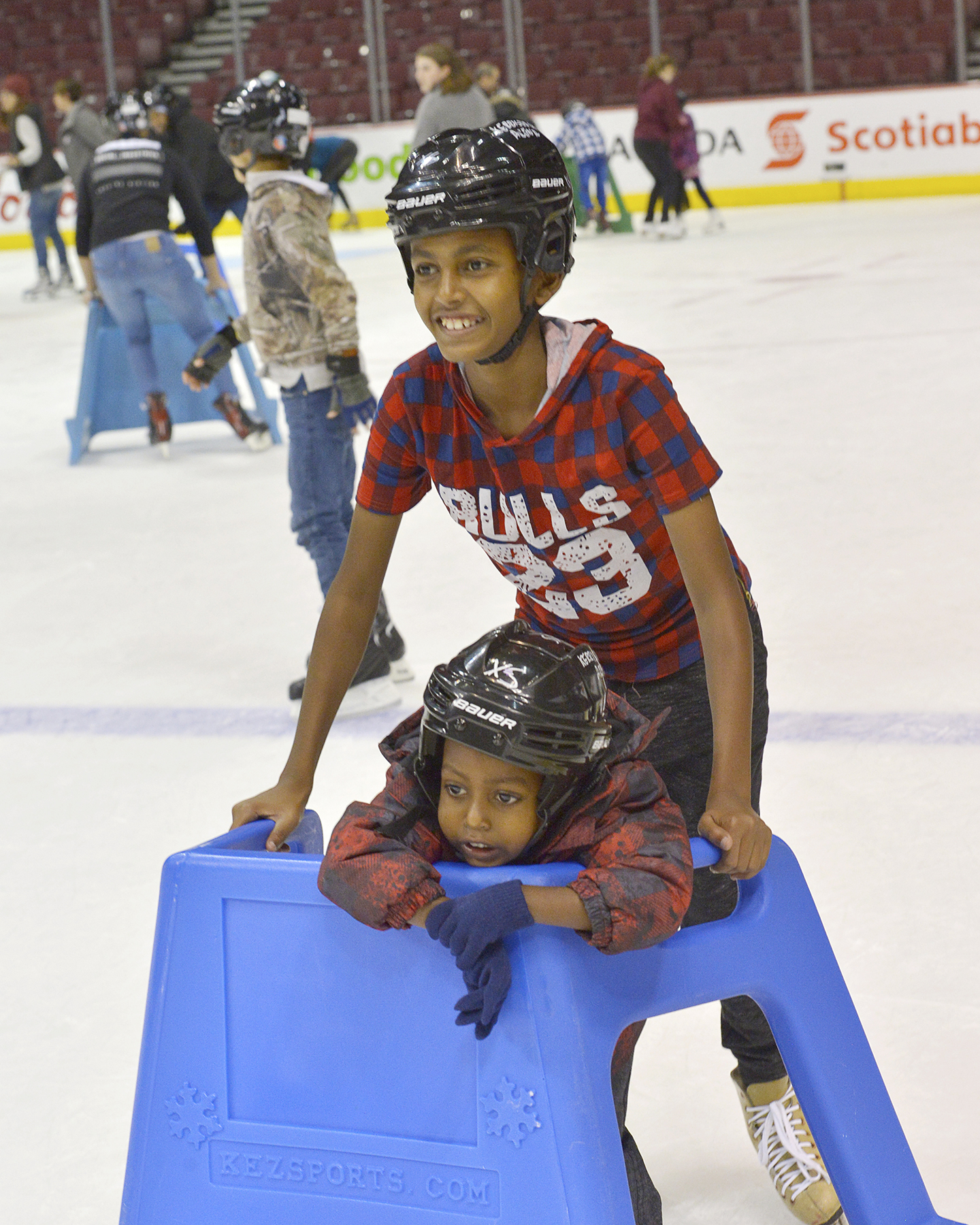 Clutching the boards, her eyes widened as she watched more experienced skaters. “How long does it take to skate [like that]?” she asked, pointing. Slowly, her hands inch away from the wall just long enough to pose for a picture. “It’s hard!” she said, wobbling on her blades. “Everybody [in Canada] skates?”

Oktay Alishoo, who came to Canada from Turkey a year ago, also started off glued to the boards. But only half an hour later, he was whizzing across the ice unassisted.

He hadn’t quite mastered how to stop or skate backwards, but Alishoo had quickly absorbed quite a lot of Canadian culture.

“Sorry!” he called out apologetically as he lost an edge.

— with files from Ed Ngai

The survivors next door