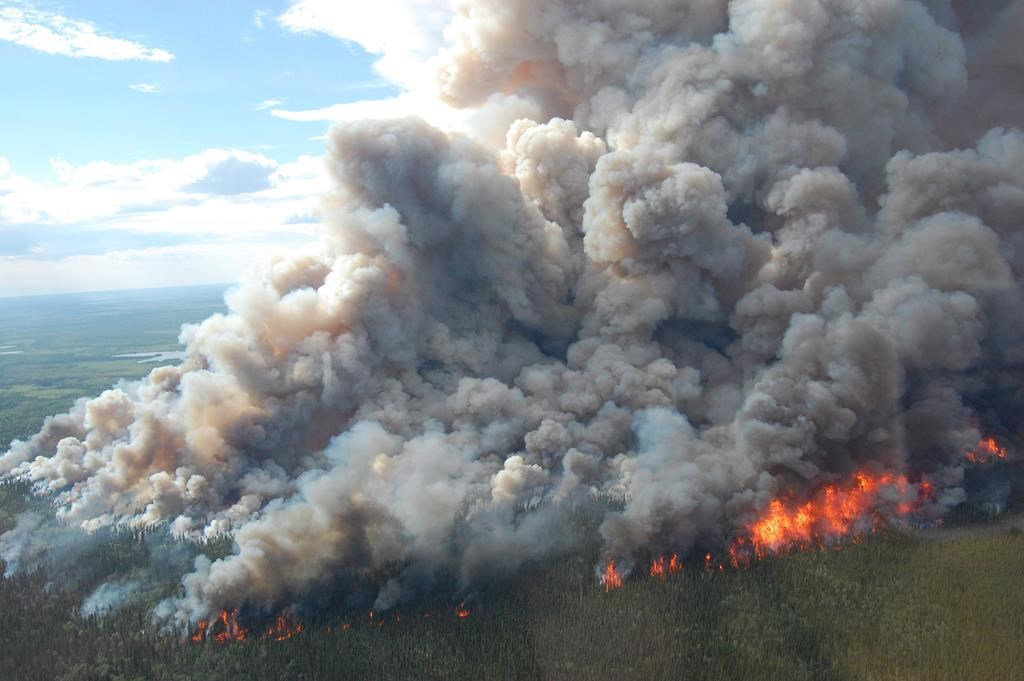 Canada loses 20 times more forested land to fires and invasive bugs each year than it does to harvesting wood for industry — and Canada's lumber association says climate change is making it worse.

Derek Nighbor, president of the Forest Products Association of Canada, says he believes developing plans to address the impacts a warming planet is having on Canada's forests needs to be a priority.

"We spend a lot of time looking back at history and trends but we (have) got to be looking forward and doing some modelling in terms of the warming climate and how do we stay ahead of this so we can ensure healthy forests for the future," he told The Canadian Press.

By comparison, 779,000 hectares were harvested by the lumber industry.

It means 5.4 per cent of Canada's forested land was lost to bugs and fire while 0.2 per cent was harvested.

"We are seeing pests ravaging our forests more than they ever have before," said Nighbor. "If you talk to our biologists and our foresters we believe a lot of that is because of the changing climate."

Spruce bud worm is ravaging forests in Atlantic Canada and Quebec, while in the west the mountain pine beetle is having its way with wood and marching eastward. Nighbor said the beetle is now ready to invade into Saskatchewan if it hasn't already.

Meanwhile, the emerald ash borer, which has already destroyed millions of trees in eastern Canada and the United States, is making its way west.

The City of Winnipeg reported the discovery of the destructive bug on December 7, and is braced to lose 350,000 ash trees to it.

When pests settle in, they kill trees which become dead wood. When climate change raises temperatures and causes droughts, those same dead trees become kindling and the forest fire risk explodes. This past year was the worst forest fire season ever on record in British Columbia, with 1.1 million hectares burning just in that province alone.

"This is proof that climate change, that the forest is changing and we need to stay on top of this," said Nighbor.

Nighbor said the industry's scientists and experts are constantly assessing the situation on the ground and some options could include planting more pest-resistant trees in the future.

However, Dan Kraus, national conservation biologist at the Nature Conservancy of Canada, said introducing new species of trees is a dangerous prospect.

Forest fires themselves are natural and necessary to helping the forest rejuvenate itself, Kraus said. Still, he said climate change is making them more frequent and the infestations of beetles and other pests is adding insult to injury.

He said introducing controlled fires in areas with large swaths of dead wood is one option. Harvesting in those areas is another, although he said the heat from fires actually makes a difference in encouraging rejuvenation so harvesting followed by controlled fires may be better.

Nighbor said Canadians have to take time to figure out what the forest looks like in the future.

By Clothilde Goujard | News | November 29th 2017
State Of The Animal