In the eye of the refugee hurricane 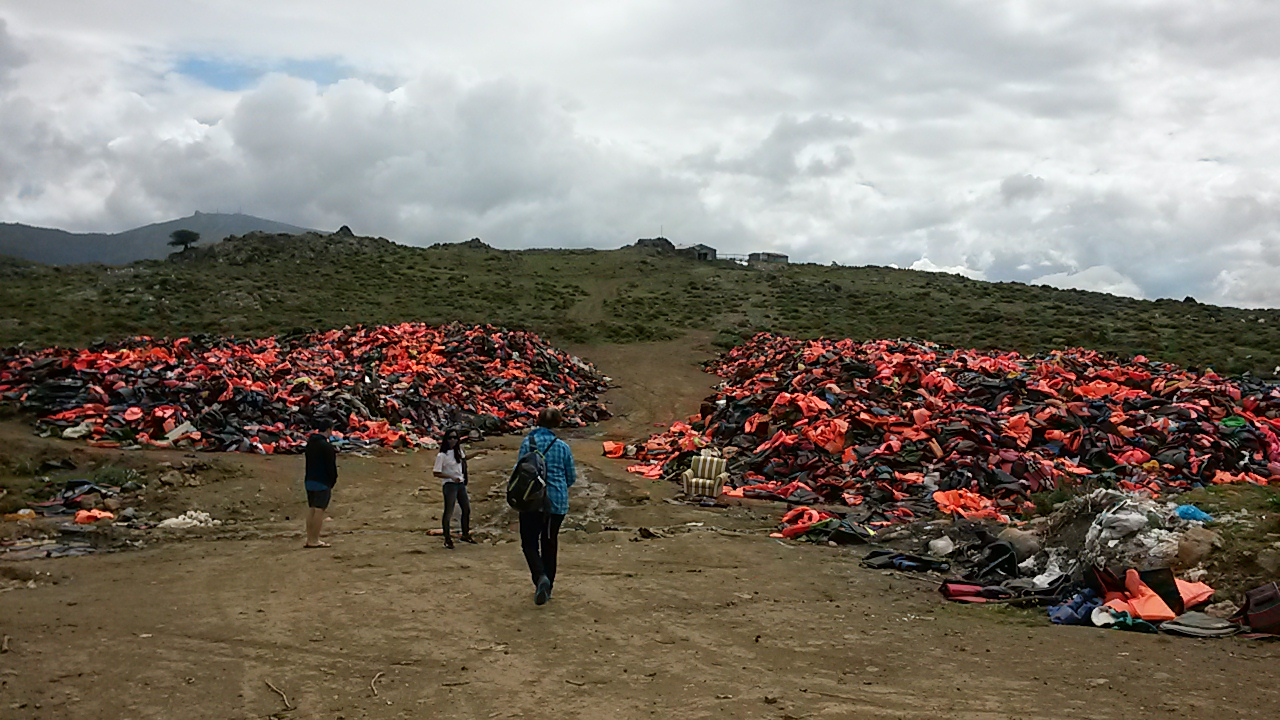 The shores of Lesbos, Greece, filled with debris and life jackets from wrecked boats. Photo by Peter Nix
Previous story
Next story

Atmospheric hurricanes have devastated many lives recently, their ferocity enhanced by warm seas and moist air associated with climate change.

And that same historic environmental crisis, coupled with massive droughts and huge social and political stresses in the Middle East and North Africa, is creating human migrations on this planet so damaging and turbulent that they could be described as 'refugee hurricanes.' Violent winds of forced exile tear families apart, flinging them to different continents on opposite ends of the planet. As political storms brew, foundations of people's lives are uprooted and tossed into oblivion. Even when they make it to safety, a torrent of prejudice and xenophobia rains down on them, dampening their dreams.

My own journey started as an environmental scientist in Canada, attempting to reclaim land destroyed by oilsands mining; but ended as self-described carbon buster, recognizing the greater need to reclaim our atmosphere by not digging up oilsands. Refugee hurricanes related to climate change are occurring world-wide; small ones may have carried Canadians fleeing forest fires at Fort McMurray; ironically from the centre of the oilsands, where I once worked.

This particular story of a much larger refugee hurricane originates from the composite voices of young Afghan men hurled onto the shores of Greece, where I met them while volunteering in refugee camps in 2016 and 2017. Tragically, this hurricane blows them on a journey from Afghanistan all the way to Europe; then after years of desperate swirling, deposits them back home where a peaceful life is even less likely than when they first fled.

Many young Afghans flee the army due to the corruption and extreme violence that pervades their society. I saw photos of their dead comrades, blown to bits. And I witnessed the kind of vengeful behaviour of some Afghan elders — men — that diminishes hope for a tolerant and peaceful society. So they ride the hurricane.

But this refugee hurricane is devilish, whirling these young people back and forth between developing countries such as Pakistan, Turkey and Iran. They take buses, ride donkeys and taxis, and work part-time to survive; routinely cheated by employers, robbed by criminals, deported by what I would describe as hostile governments. Incredibly, some bear children and struggle to feed families while swirling within this social and physical tempest.

Many of these refugees travel for years looking for a normal life, within many countries; but they are often not wanted, facing discrimination. Eventually they pay smugglers to escape by boat to Greece. Near Greek refugee camps where I worked, once-thriving rivers are now empty gravel ditches due to climate change — and jobs have also dried up. So they smuggle themselves to Germany hoping for a job and a better life.

I met one Afghan deserter, an ex-officer, with his 10-year-old brother. He helped me buy equipment, advised me how to stop the theft of carpentry tools, and warned me about who to trust. He never asked me for money. Sometimes I took him and his brother to the beach and we watched the fishermen, ate really good Greek ice cream, and had a laugh. A small respite from a refugee camp surrounded by barbed wire.

In Greece, international charities and the government provide basic services of food and shelter in the refugee camps, paid for by the European Union. But these services are minimal and often offered carelessly due to what strikes me as indifference, corruption and bureaucratic stupidity.

Independent volunteers from many countries, including Greece, fill this gap between minimal aid and caring aid. When there is no fresh fruit in camp, Spanish volunteers bring in cars filled with fruit. When authorities in the camps refuse to supply cooking equipment because small kids might get burned — yes, that was the reason provided — my wife bought the refugees hot plates. When ambulances refuse to come to camp, German volunteers jump in a car and drive sick babies to the hospital. And when young men need a break from camp, it is these independent volunteers that take them into town for a coffee since most charities do not allow employees take refugees in their cars.

Where are all the PhD students studying how to handle human refugee crises? Why is caring so hard?

In one case, continuous thefts were occurring due to a hole in the cement wall of a warehouse; but the people in charge did nothing.

Photo of hole in the wall of a Greek refugee shelter by Peter Nix.

Their only task was to provide food, and the continual loss of kitchen equipment did not deflect it from this so very narrowly focused goal. So I bought cement and paid an elderly Afghan to repair the hole, and the next day he used the money to flee to Italy in a tool box underneath a truck. He was an old man: no home, no family, no teeth, nothing — riding the refugee hurricane.

But I did not deliberately finance his trip as some volunteers who have aided refugees have been prosecuted in Europe for, ironically, participating in human smuggling. Independent volunteers are often disheartened by the uncaring bureaucracy of some charities and governments. A recent email from one volunteer friend reads:

“Two days ago was the first heavy rain and many trailer homes are leaking...the responsible forgot, again, that winter is approaching and brings along cold and wetness...what to say...I was very frustrated.”

And in tandem with bureaucratic inertia, many less inspiring members of Afghan’s tribal society are blown into the camps with the young men. My wife confronted a group of Afghan elders, who were disrupting the work of younger men in our carpentry shop. Their faces were wrinkled and unkind as they swirled around in the dust amidst much noise and confusion. Sensing trouble, I backed off and hoped the younger men could handle this situation without violence.

One young man, an ex-Afghan army officer, retained a calm professional behaviour, but this did not calm the angry elders.

It is my wife who handled this very male mob. Exasperated by their shouting and bullying, she raised her hands up to the elders’ faces and told them to "stop shouting and either help with the work or go away."

The men did not understand the meaning of her blunt words, but their startled eyes certainly understood the message. The presence of forceful and outspoken women volunteers blows winds of gender equality into these camps.

Our young army deserter friends wanted a more positive and promising life, and so were desperate to get out of the camp. From Greece, it costs about $300 to get smuggled by truck into Italy, and about $4,000 for a fake passport and airplane ticket to Germany.

To pay the smugglers, they work illegally for companies that either pay very little or cheat them completely.

I learned some steal camp equipment, anything not tied down, to re-sell for money. A refurbished warehouse in the camp has even its light fixtures ripped out and sold in the Greek capital of Athens.

If a refugee is detected trying to board a truck or plane, they make a run for it and try again another day. No guards bother to chase them because they are already in a kind of jail — a refugee camp. And security is lax as the Greek government appears happy to see its refugees flee to Germany.

But even after reaching Germany, the refugee hurricane's eye does not blink. It sees them yet again, in the form of the German immigration police. About 60,000 illegal Afghan refugees are caught each year and returned; not to Greece, but back to Afghanistan. It's a disastrous outcome for an army deserter.

These men are dropped by the hurricane’s winds right back where they started; after years of hard scrabbling in unwelcoming and unstable countries, a miserable life in Greek refugee camps, and a fugitive’s life in Germany, their quest for a better life sometimes hits an unexpected snag. They told me they cannot live with friends or family, as this would expose loved ones to reprisal attacks from the Taliban, which they had fought. And they cannot get a job and live a normal life, as this will expose them to arrest by the army, which they had deserted.

Their government will jail them for deserting the army. The Taliban will kill them for joining the army. So, this refugee hurricane has picked them up and destroyed them as surely as atmospheric hurricanes and climate change have destroyed people lives in Texas or Puerto Rico.

As a privileged Canadian, I could leave Greece and drink coffee on my porch on Vancouver Island's beautiful and calm Cowichan Valley. But my peace and solitude is interrupted by the voice message of one young Afghan friend still trapped in the refugee camp.

His family has been scattered and shattered by the refugee hurricane; a dead Taliban father, a mother, both arms broken by her husband but miraculously set down in Germany by forgiving winds; a sister, lost forever in its vortex; and a brother, luckily swept to its fringes and adopted by Danish parents. It's chaos.

On a planetary scale, refugee hurricanes manifest themselves as chaos within whole populations fleeing inhospitable social and environmental climates in northeastern Africa, as the chaos of tropical island villages preparing to be abandoned as they submerge under rising ocean waters, and as the chaos within North American cities suffering multi-billion dollar flood or fire damage.

But on a human scale, this refugee hurricane is represented by my young friend, who is sorely missing his family, alone in a refugee camp consisting of dusty gravel, rotting trailers and a few old warehouses. He tells me about his desperate state of mind.

He has stopped working in the carpentry workshop and smokes away the €150 given to him each month. He sees no hope for his future, and is depressed.

Canadian refugee regulations do not permit me to sponsor him into Canada. Because he is Afghan and already technically in Europe, Canada will not consider him a refugee. I could send money to smuggle him to Germany, exposing me to charges of human smuggling and exposing him to an uncertain future. I could encourage him to ask for asylum in a debt-crippled Greece, where there are few jobs and where he is not welcomed. Or I could sip my coffee, send him a few more Euros, and give him my heartfelt best wishes.

For sure, his life journey is fraught with uncertainty.

In my head, I know that if we do not stop burning fossil fuels we will accelerate the ferocity of both atmospheric and refugee hurricanes. And as for the link between environmental collapse caused by climate change and terrorism, we should all ask ourselves: "How many desperate and alienated young men do we want on this planet?"

Postscript: The one young man who phoned has recently asked for asylum in Greece. He has a chance.

Chaos over a picnic table at a refugee camp in Greece