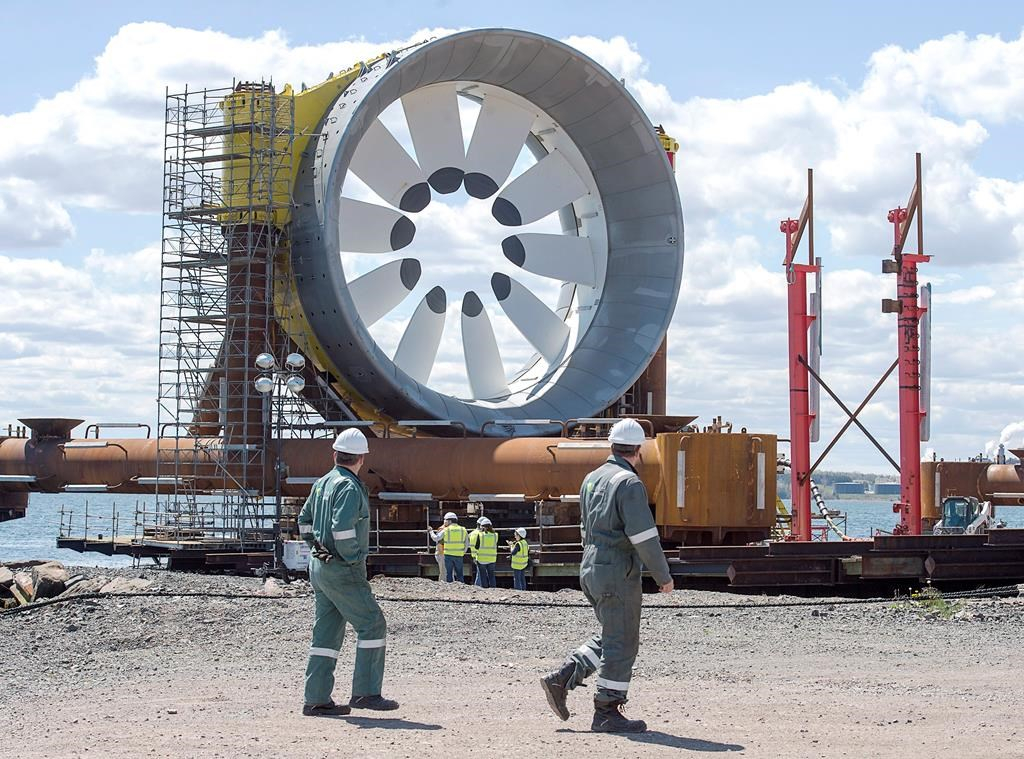 A tidal turbine is seen on a barge on May 19, 2016. File photo by The Canadian Press
Previous story
Next story

As Nova Scotia pushes ahead with its bid to become a world leader in tidal energy, significant knowledge gaps remain — particularly when it comes to environmental monitoring of test turbines in the Bay of Fundy, the head of an independent research group says.

"We don't know enough about the environmental impacts of those devices," Stephen Dempsey, executive director of the Offshore Energy Research Association, told a news conference Tuesday at Dalhousie University.

"Will they harm our marine life? What will it do to... our intertidal bays? This work has to proceed. We have to deepen our understanding to make progress."

Dempsey, whose non-profit organization dispenses funding from the Nova Scotia Energy Department, made the comments after the province announced a new competition for research funding.

In all, $150,000 is being offered to support five projects that will involve the use of Dalhousie's Aquatron — one of Canada's largest aquatic research facilities.

Dempsey, standing in front of one of the Aquatron's huge water-filled tanks, said the top research priorities include developing specialized technology to deal with the extreme conditions within the bay, where the amount of water flow as the tide changes amounts to a larger volume than that produced by all of the rivers in the world.

In the Minas Passage, a five-kilometre-wide channel near Parrsboro, two tidal turbines have undergone testing in recent years. In 2009, the first in-stream prototype — weighing in at 400 tonnes — was torn apart by the world's highest tides, which can move at 18 kilometres per hour.

As well, Dempsey said more research is needed to reduce the cost of producing electricity from tidal energy.

"Costs are too high to be economically viable," he said. "If we solve all of the technical problems and we don't deal with the cost issue, we'll have an elegant solution that is not implementable."

But the first priority Dempsey mentioned was the need to improve environmental monitoring.

"We certainly need to understand more about the interaction of the device on the environment," he said when asked about a myriad of concerns raised by the 175-member Bay of Fundy Inshore Fishermen's Association.

"We're just getting started with one device in the water."

On Nov. 22, 2016, a second test turbine, this one developed by Cape Sharp Tidal, began producing power from the bottom of the bay near Parrsboro. With the flick of a switch, it became North America's first in-stream tidal turbine linked to an electricity grid.

The 1,000-tonne turbine, which is five storeys tall, was hauled out of the water last June and sent to Saint John, N.B., for upgrades.

"Our careful inspection of the recovered Cape Sharp Tidal turbine found that the overall exterior is in good condition," the company said in a statement released Tuesday, adding that a closer inspection of the internal workings will be conducted later.

The fishermen's association had challenged deployment of the second turbine, arguing in court that Cape Sharp Tidal's environmental effects monitoring program was drafted without "relevant baseline data" about the bay's ecosystem. They also argued that a federal review had found "knowledge gaps" in information provided to the provincial government.

But Nova Scotia Supreme Court Justice Heather Robertson rejected those arguments in April, saying "extraordinary efforts" had been made to evaluate the risks associated with the pioneering project.

"We're not allowing the (turbine testers) to do anything haphazard in terms of getting out ahead of environmental protection," he told the news conference at Dalhousie.

"For us, there's nothing in terms of dangerous decisions or getting out too far — that's certainly not the case."

MacLellan said the tidal energy industry has the potential to create 22,000 jobs and generate $1.7 billion for the Nova Scotia economy.

Cape Sharp Tidal confirmed Tuesday that a third test turbine will be lowered into the bay this summer.

"The work we're doing on that turbine is focused on improving efficiency and reliability," the company said. "With the world's highest tides and some of the strongest tidal flows on the planet, the untapped energy potential of Nova Scotia's Bay of Fundy presents a tremendous opportunity for renewable energy developers."