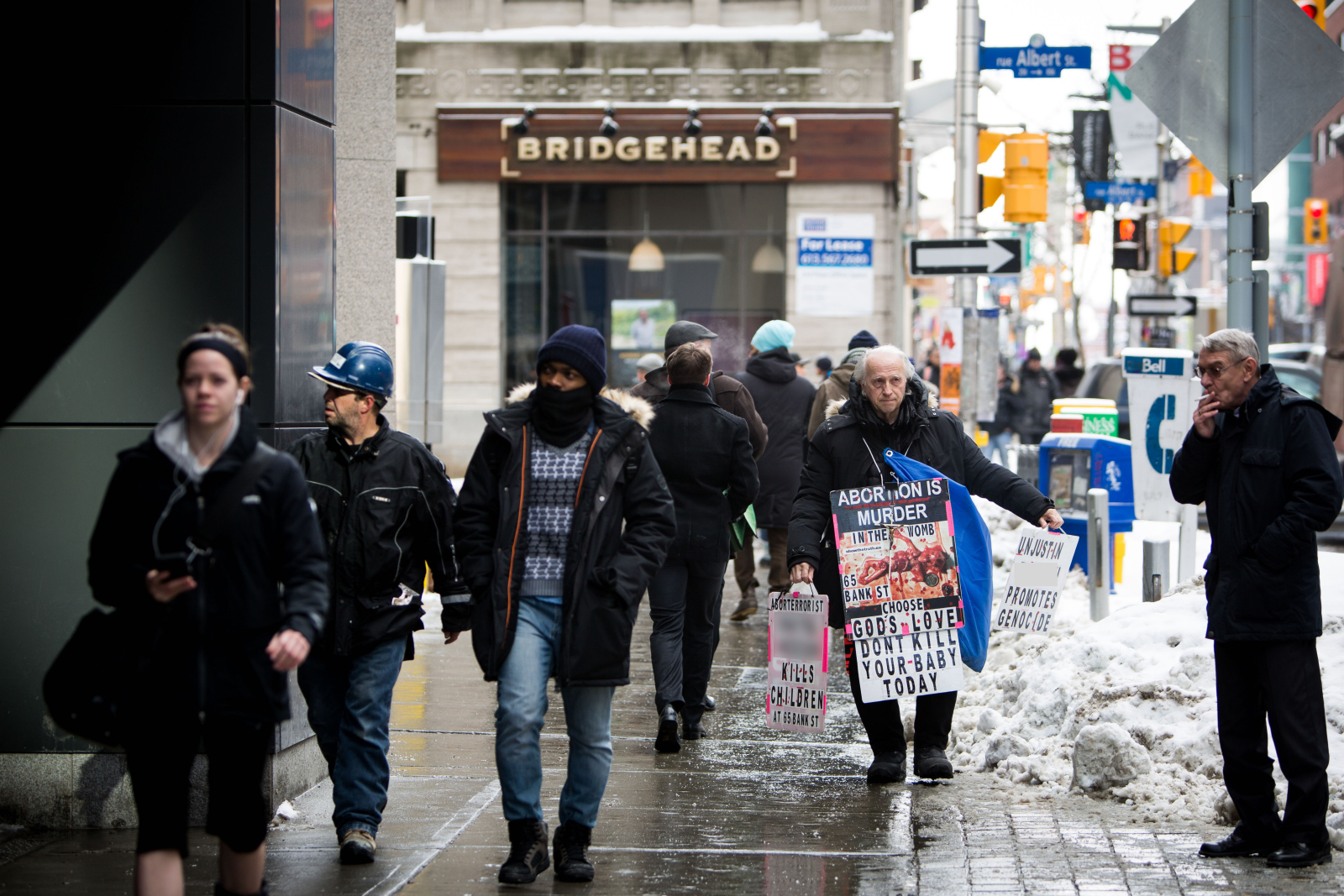 Cyril Winter has been protesting by the Bank Street Morgentaler abortion clinic in Ottawa for more than six years. He can no longer demonstrate within 50 metres of the clinic, but keeps on protesting a block away on Feb. 6, 2018. Photo by Alex Tétreault
Previous story
Next story

A new Ontario law establishing safe zones, also known as bubble zones, around abortion clinics is now officially in place. The Safe Access to Abortion Services Act bans protests within a 50-metre radius of an abortion clinic. Violators face a maximum $5,000 fine and six-month jail sentence for one offence, with up to $10,000 and a year in prison for multiple offences.

It is no small feat to provide women seeking an abortion in Ontario safe access to healthcare services without fear of harassment, intimidation or interference. It has been a long time coming and something many people have advocated. Despite repeated demands over the years, it took escalating violence and harassment outside the Morgentaler Clinic in downtown Ottawa to get the ball rolling to enact this legislation.

“I’m really happy about this new legislation,” says Patricia LaRue, executive director of Clinique des femmes de l’Outaouais, a women’s health clinic that offers contraception and abortion services in Gatineau, across the river from Ottawa in Quebec. “It was very difficult for women trying to access these services in Ottawa. The protesters were very aggressive, they would try to identify them, speak to them, try to take pictures of them, follow them, try and forcibly give them anti-abortion pamphlets, urge them to repent. We had many cases of women coming out-of-province here to access our services because they were trying to avoid being harassed or judged.”

While most anti-abortion protests aren’t violent, more than enough people attempting to access abortion clinics have witnessed or experienced ugly, insistent, highly aggressive intimidation tactics to justify such a law.

It was not that long ago that the late Dr. Henry Morgentaler’s Toronto clinic itself was hit by a firebomb, the 1992 incident preceded by several unsuccessful arson attempts. Dr. Morgentaler himself was repeatedly threatened with murder.

This new law protects medical staff who are forced to navigate often-aggressive protests to access their workplace. It gives more power to the police to arrest those trespassing the zone and engaging in emotionally or physically violent behaviour. It protects the rights of women to access a perfectly legal and often necessary medical procedure without suffering abuse and intimidation by anti-abortion zealots.

Law does not violate freedom of speech

The day the law was effective, members of the Campaign Life Coalition and other abortion opponents held a protest, with some asserting that the new provisions violate their freedom of speech. That is a misleading statement to make.

In Canada, section 2(b) of the Charter of Rights and Freedoms protects “freedom of thought, belief, opinion and expression, including freedom of the press and other media of communication.” Freedom of expression in Canada is not absolute, however. Absolute free speech is an American concept. Section 1 of the Charter allows the government to pass laws that limit free expression so long as the limits are reasonable and can be justified in a free and democratic society.

No one is shutting down debate or violating anyone’s right to protest. People who oppose abortion on moral grounds are still perfectly free to say so. They are simply no longer free to do it while wearing sandwich boards plastered with gruesome pictures of what they claim are aborted fetuses while yelling in a woman’s face while she’s about to undergo a very private, personal, and perfectly legal medical procedure. A safe zone merely means that a small parameter has been established where that’s no longer permitted. Anti-abortionists can continue to voice their opposition anywhere else they please – ideally, in front of Parliament Hill since that’s where such laws should be debated.

“They are free to express themselves and protest, but they simply can’t do it in front of a clinic," says LaRue, the Gatineau clinic official. "This law is respectful of that. It balances the fundamental rights of people to protest with a woman’s right to make her own decisions about her body without feeling violated."

It’s difficult, expensive, and time-consuming for a clinic to have to apply to get injunctions or restraining orders on each person who violates the law outside of their premises to harass people. This new law will also make it unnecessary for patients or staff who have been harassed to have to provide proof and establish a court case every single time it happens, ultimately saving time and resources.

The Abortion Rights Coalition of Canada says Ontario’s new safe zone law is similar to one in British Columbia and Newfoundland and Labrador. British Columbia passed an Access to Abortion Services Act in 1996 that defined a perimeter around abortion clinics where protesters can’t demonstrate, harass, photograph women and doctors. B.C. passed the law in the wake of the shooting of Vancouver abortion provider Dr. Garson Romalis. The Newfoundland/Labrador Access to Abortion Services Act was passed in November 2016 and is nearly identical to the B.C. law. A month later Quebec passed Bill 92, inspired by B.C.’s law, but not identical.

In addition, there are also four clinics and five hospitals in Canada that have private injunctions, obtained in court, that create a safe zone around the facility that prohibits or controls the presence of protesters.

The new Ontario law provides safe zones of up to 150 metres automatically to eight private abortion clinics in Ontario; upon application to hospitals, medical clinics and other facilities that offer abortion services; around the homes of abortion providers, including private clinic staff; and around pharmacies or offices upon application by pharmacists, midwives and other regulated health professionals who provide abortion services outside clinics.

It remains to be seen whether this move will motivate other provinces to enact similar legislation.

In the meantime, advocate groups like Planned Parenthood are expressing relief and satisfaction.

"People accessing health care services, including abortions, must be free to do so without fear of harassment or intimidation,” says Marnie Mitchel, co-president of Planned Parenthood Ottawa. “By protecting patients and providers, this legislation will help to reduce stigma and create safer spaces for people to receive the care they need.”

LaRue agrees.“The presence of protesters will not change a woman’s decision to have an abortion,” she says. “It’s a well-thought-out decision. It just changes her experience. A woman needs support, not judgment at that moment.”

N.S. now only province that requires a doctor's referral for abortion: advocates

Bang on. And any moralists

Bang on. And any moralists who would force their values on everyone else who thinks they have a right to call harassment tactics 'free speech' should be put in their place. The idea that some of us have the right to say and do any damn thing we like, while others have to get in line with the privileges and prejudices of those few has little to do with Free anything.

It's about Legislating for others....

People who care about ALL our children now, would be working to end war, to end social inequality, to end fossil fuel extraction and carbon intensive industries that are putting the future of life on earth at serious risk.

They would not be harping on about their rights to a free speech that pre-supposes women do not have full and free rights to their own bodies. If we want to end abortion, end poverty....and the prurience that makes safe sex a taboo topic.