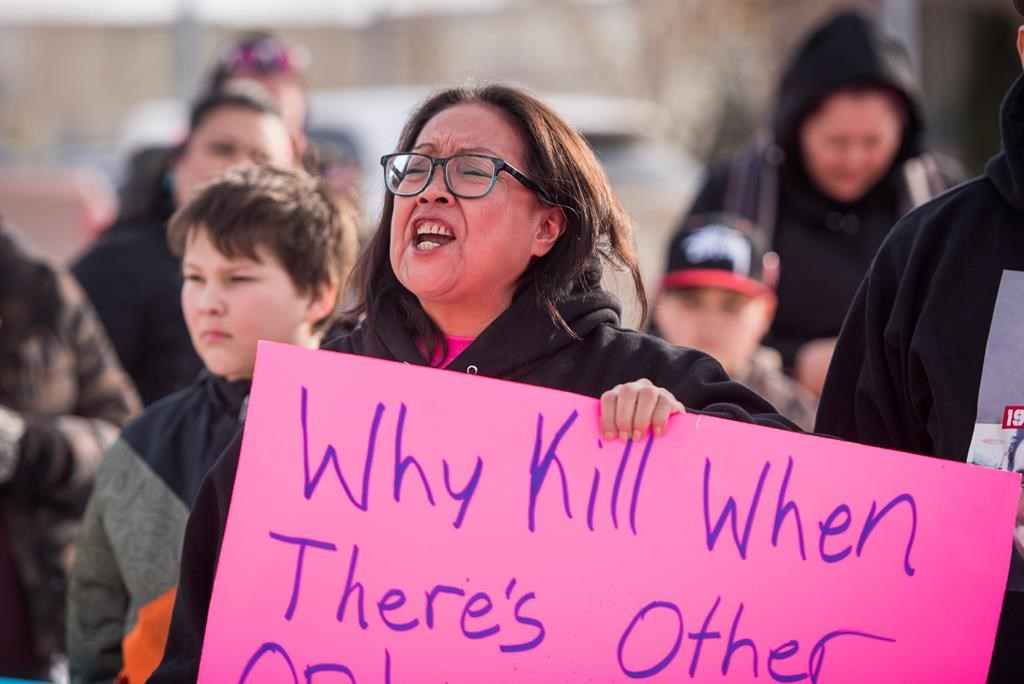 The emotions were raw at demonstrations across Canada on Saturday to protest the acquittal of a white Saskatchewan farmer in the shooting death of a young Indigenous man.

The atmosphere was particularly charged at a rally in North Battleford, where the victim's mother delivered an angry, defiant address near the courthouse where the verdict was delivered the night before.

"White people — they run the court system. Enough. We're going to fight back," Debbie Baptiste told a crowd of roughly 100 people, some of whom carried signs reading Indigenous Lives Matter. "They're not sweeping us under the carpet. Enough killing our people. We fight back."

The defence for Gerald Stanley had argued that his gun accidentally went off, killing 22-year-old Colten Boushie with a single shot to the back of the head in a "freak accident."

"That ain't no freak accident," said Baptiste. "Go to hell, Gerald Stanley. That's where you belong."

Alvin Baptiste, Boushie's uncle, said it has been a difficult time for the family, but he called the rallies a good start toward changing the system.

"I want to take this all the way to Ottawa," he said. "Indigenous people have never received justice throughout Canada. This is white-privileged justice that has happened to my family. A whitewash."

Baptiste said he had a meeting scheduled with Saskatchewan Premier Scott Moe in Saskatoon on Saturday, but he also wants to sit down with Prime Minister Justin Trudeau.

"The prime minister has spoken so many words, but has never heard our words," he said.

Trudeau addressed the case Saturday at a news conference in Los Angeles, where he was wrapping up a trip to the U.S.

"I'm not going to comment on the process that led us to this point today, but I am going to say we have come to this point as a country far too many times," he said.

"Indigenous people across this country are angry, they're heartbroken, and I know Indigenous and non-Indigenous Canadians alike know that we have to do better."

Supporters of the Boushie family held rallies in cities across the country Saturday to show solidarity. In Edmonton, where several hundred people gathered at the city's police headquarters, Dale Janvier called for people to make Boushie a martyr.

"If we need a martyr, then this would be a martyr right here. Hopefully it's a martyr of peace, not revenge, and Colten's death could be for something," Janvier told reporters after addressing the crowd.

Hundreds also attended a rally in Toronto, where Shandra Spears Bombay of the Rainy River First Nation said it always is surprising to see how the government and justice system can continue to disappoint Canada's Indigenous people.

"It's always a shock to see how far that Canada's racism can go," said Bombay. "I know it's there, I know it's pervasive, but sometimes when they don't have a hope in heck of being innocent, they're still found innocent of shooting someone in the head."

At an Ottawa rally, the sound of people chanting a Cree honour song mixed with the noon bells of the Peace Tower on Parliament Hill.

Eight-year-old Mariposa Horsley stood beside her mother and brother and held a sign that read Everybody Matters.

"I have a best friend who is Inuit. Her mother is actually a throat singer," she said.

"I thought it would be nice to come because I don't think we should be against people just because of the colour of their skin. It's not fair."

Kurt Littlewood, who was at the Edmonton rally, noted the tragedy of the shooting goes back further than the incident on Stanley's farm, and that he feels some sympathy for the man.

Littlewood said Stanley's actions were born out of the thefts and other incidents his neighbours in the region had experienced, as well as the animosity between Indigenous and non-Indigenous communities.

"Actions taken against Colten were just a moment of blind rage against a situation," said Littlewood. "Still, I would like Stanley and others to accept the responsibility, take hold of what they did, and that they can bring peace to both communities," Littlewood said.

—with files from Rob Drinkwater in Edmonton, Salmaan Farooqui in Toronto and Geordon Omand in Ottawa

After a week of reading

After a week of reading article after article, and lots of editorial comment, and thinking it over, this tragic event evokes a few mental images.

One is of a bunch of intoxicated young people arriving in a farmyard with intent to steal a vehicle.

One is of a farmer scared by the arrival of the young people, fearful for the fate of he and his wife and son.

One is of a court where all the jurists, the judge, the prosecutor and the defence are all one race; and it is the same race as the accused.

The first two images seem like to lead to tragedy regardless of the colour of the skin of the people involved.

The last is an injustice at a much deeper level. As a caucasian person, I know how I'd feel if the situation were reversed. No doubt at all. So, I get it.

The justice system is a reflection of our society. Inherent racism in our society cannot be fixed by making a couple of adjustments to jury selection, although it would be a good thing to make it more inclusive. The inherent racism we have still is the issue; I hope we do not look here for a quick fix, and then pretend that we have accomplished something significant. The "Gladue" decision has failed to have significant impact because it failed to understand that sentencing is the end of the train; we have to start at the engine instead.