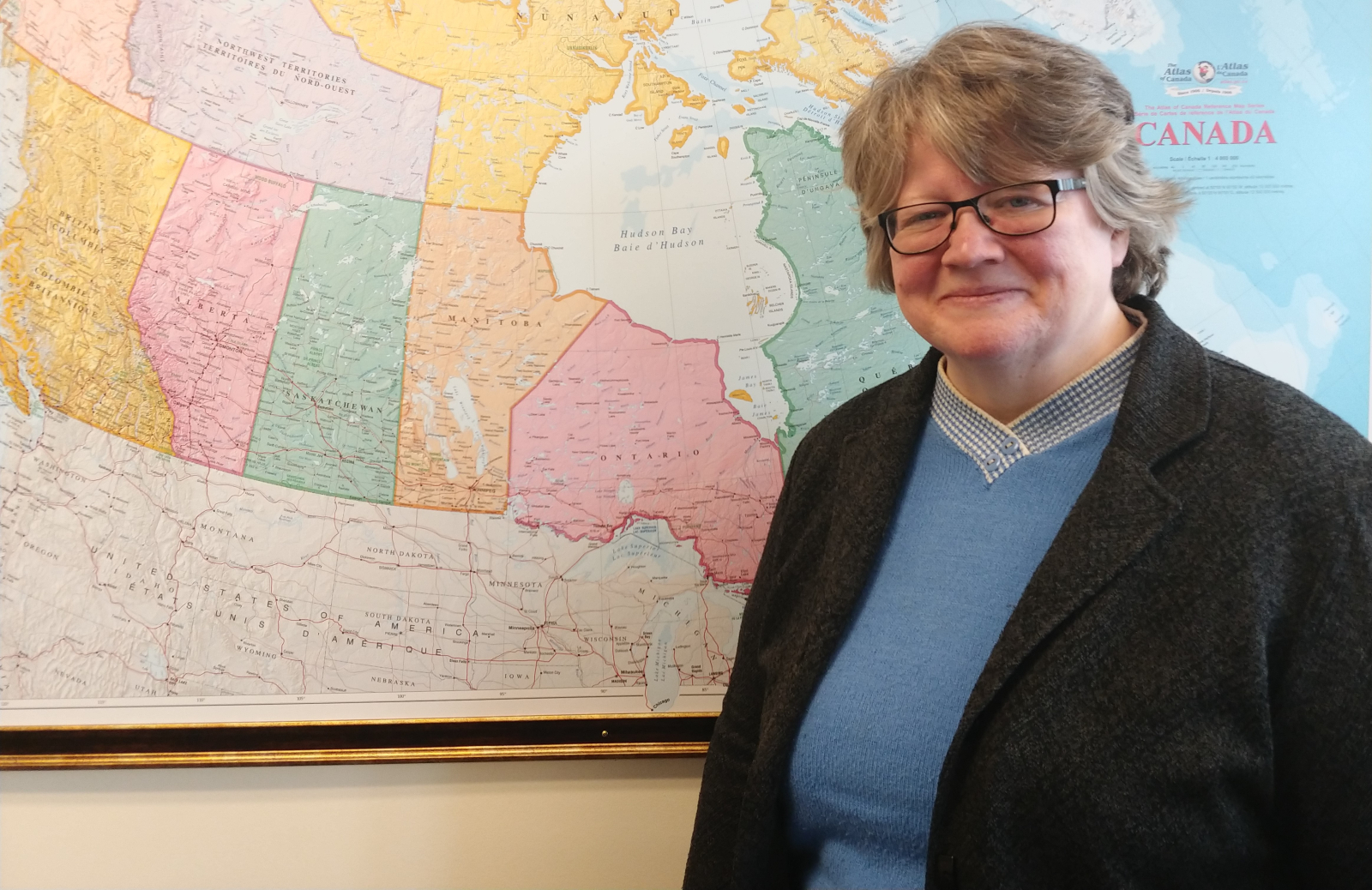 Thérèse Coffey, the United Kingdom’s Parliamentary under secretary of state for the environment, at the British High Commission on Feb. 13, 2018. Photo by Carl Meyer
Next story

In an interview with National Observer, the UK's junior environment minister said both countries are expanding their international efforts to get rid of plastics pollution in the oceans, starting with an April summit of the Commonwealth countries and then a June meeting of the G7, the world's seven largest economies, in Quebec.

The news comes as a new report shows the Liberal government gave $35 million to a chemical company that makes plastic resins.

An estimated 8 million tonnes of plastic garbage ends up in the world's oceans each year. Plastic debris is polluting the oceans, accounting for billions of dollars in waste and killing turtles, dolphins and albatrosses in the South Atlantic and on Pacific atolls, according to the UK government’s 25-year environment plan released in January.

The plan commits the UK to working “through the UN, G7 and G20 to tackle marine plastics pollution at an international level.”

Prime Minister Justin Trudeau has said he will use the opportunity of the G7 in Charlevoix, Que starting on June 8 to push member countries on the topic of ocean protection, plastics and pollution.

Environment and Climate Change Minister Catherine McKenna said that could include a "plastics charter or a zero waste goal."

Thérèse Coffey, the United Kingdom’s parliamentary under secretary of state for the environment, said Tuesday the topic is also being discussed in the context of a potential Commonwealth declaration.

“The Canadians are keen to have more of a formal declaration on plastics later this year, and certainly with the Commonwealth summit,” she said in an interview at the British High Commission in Ottawa on Feb. 13.

“You’ve got this great opportunity to work together for the G7 and for the Commonwealth summit, in order to have a good focus on the health and state of our oceans, and also the link into marine plastics.”

Welcome to Canada, @theresecoffey! Great to be working together to protect our oceans. Action is needed now more than ever before.
🇨🇦🇬🇧 pic.twitter.com/bHt18HnyFP

The UK is hosting the next Commonwealth Heads of Government Meeting in London, UK starting on April 16. Coffey said although the UK government isn't setting the entire agenda, it plans to work with the Commonwealth secretariat on the issue.

McKenna's office wouldn't confirm that a declaration was in the works for the summit, but said the topic is being considered.

"Some good work on plastic has been done in the recent years in the circular economy, the Commonwealth and the G7. It is an ongoing concern and we will build on the work that has already been done," McKenna's spokeswoman Marie-Pascale Des Rosiers said in an emailed response to questions.

Another plastics ban in the works?

Canada has no current plans for a ban or limits on the use of plastic in federal government buildings or official residences, said a spokesman for Treasury Board President Scott Brison, who oversees a government strategy to focus on recycling and composting.

Neither Coffey nor McKenna's office would give details about what a “declaration” on marine plastics would look like, either at the G7 or at the Commonwealth summit.

However Coffey pointed to the fact that both nations have banned the use of microbeads, tiny pieces of plastic used as exfoliants in toiletries. The UK’s ban is already in place, while Canada’s kicks in on July 1, 2018.

“Both our countries have banned microbeads in certain products. We could be looking at more activity like that, but also about how we reduce the amount of plastic being generated in the first place,” she said.

Des Rosiers said it was "very encouraging" that G7 nations are showing "leadership" on the issue of microbeads.

Great to meet with @theresecoffey yesterday, United Kingdom’s Minister of Environment, Food, and Rural Affairs, to discuss the importance of protecting our oceans and taking action to address marine litter and plastics. pic.twitter.com/HhsC3ruZRI

Coffey was in Ottawa Tuesday to meet with McKenna and Fisheries Minister Dominic LeBlanc.

LeBlanc and Coffey "agreed to work collaboratively in advance of the G7 meetings in Canada later this year," LeBlanc's spokesman Vincent Hughes told National Observer in an email.

The ministers "agreed on the need to address marine plastic waste," he said, and discussed a "range of proposals" on waste management, recycling and stopping debris from flowing into the ocean.

The two also discussed "illegal fishing, ocean mapping and ocean acidification, and coastal deterioration and its impact on ocean biodiversity and coral," he added.

The UK junior minister said she planned on meeting Jean-Claude Poissant, parliamentary secretary to the minister of agriculture and agri-food, as well.

She plans on speaking with “a lot more” of her counterparts in the rest of the Commonwealth about marine plastics.

Meanwhile, Canadian Press reported Thursday that a federal grant to Nova Chemicals was announced in late January as part of the Strategic Innovation Fund, a $1.26-billion, five-year business growth measure that was unveiled in last year's federal budget.

"This could mean making products like plastic food packaging stronger and more easily recyclable. This innovation could also be used in products and applications such as small appliances, automobiles, solvents and food and cosmetic additives."

According to a Jan. 23 news release from the Chemistry Industry Association of Canada, the money is also going towards Nova Chemicals’ $2.2-billion expansion plan in Sarnia, Ont., including a new polyethylene facility and expansion of an existing ethylene facility.

Ethylene is one of the main substances in polyethylene; the expanded plant will allow Nova Chemicals to produce 431,000 additional tonnes of polyethylene a year.

Nova Chemicals did not respond to requests for comment Wednesday.

Polyethylene is the world's most common plastic material. It is largely used to make plastic bags, food wrap and containers such as water and soda bottles, as well as plastic pails, pipes and bins.

A day after the grant was made public, Trudeau hosted a roundtable at the World Economic Forum in Davos, Switzerland, with the heads of multinationals and several international environment activists and academics.

There, he promised Canada would use its year as president of the G7 nations to get the world to address the issue of plastic pollution in the oceans.

Later that same day, Environment Minister Catherine McKenna said Canada was looking at getting the other members of the G7 to sign a plastics pledge to commit to reducing the amount of plastic that ends up in the ocean.

The Queen takes an interest after Blue Planet II

The interest in marine pollution in the UK is also being driven by the influential BBC documentary Blue Planet II, featuring popular naturalist Sir David Attenborough.

The program was the most-watched in the UK last year, said Coffey. Attenborough's focus on the issue led the Queen to crack down on plastics at Buckingham Palace and other Royal estates.

It also spurred the BBC itself to ban single-use plastics by 2020, according to the news agency. BBC director general Tony Hall said he was "shocked" by the documentary’s focus on plastic waste.

“I think it’s really building on different work we’ve been doing,” said Coffey, about the documentary. “I think it’s an exciting time for an effective collaboration.”

Several senior members of the UK government are promising to cut down on their plastic use for Lent, which began Wednesday.

In addition to plastics, Coffey said Canada and the UK were examining other areas for collaboration, such as the uptake of carbon pollution in the atmosphere driving a change in chemistry in the oceans, called acidification.

"It is important to understand the science behind the changes we are seeing in our oceans," said Des Rosiers, who confirmed "there were some discussions around climate science" related to the topic.

- With files from The Canadian Press

Editor's note: This story was updated at 10:40 a.m. EST on Feb. 15 to include a response from LeBlanc's office and to add new information from The Canadian Press.

The growing environmental pitch for ditching the straw