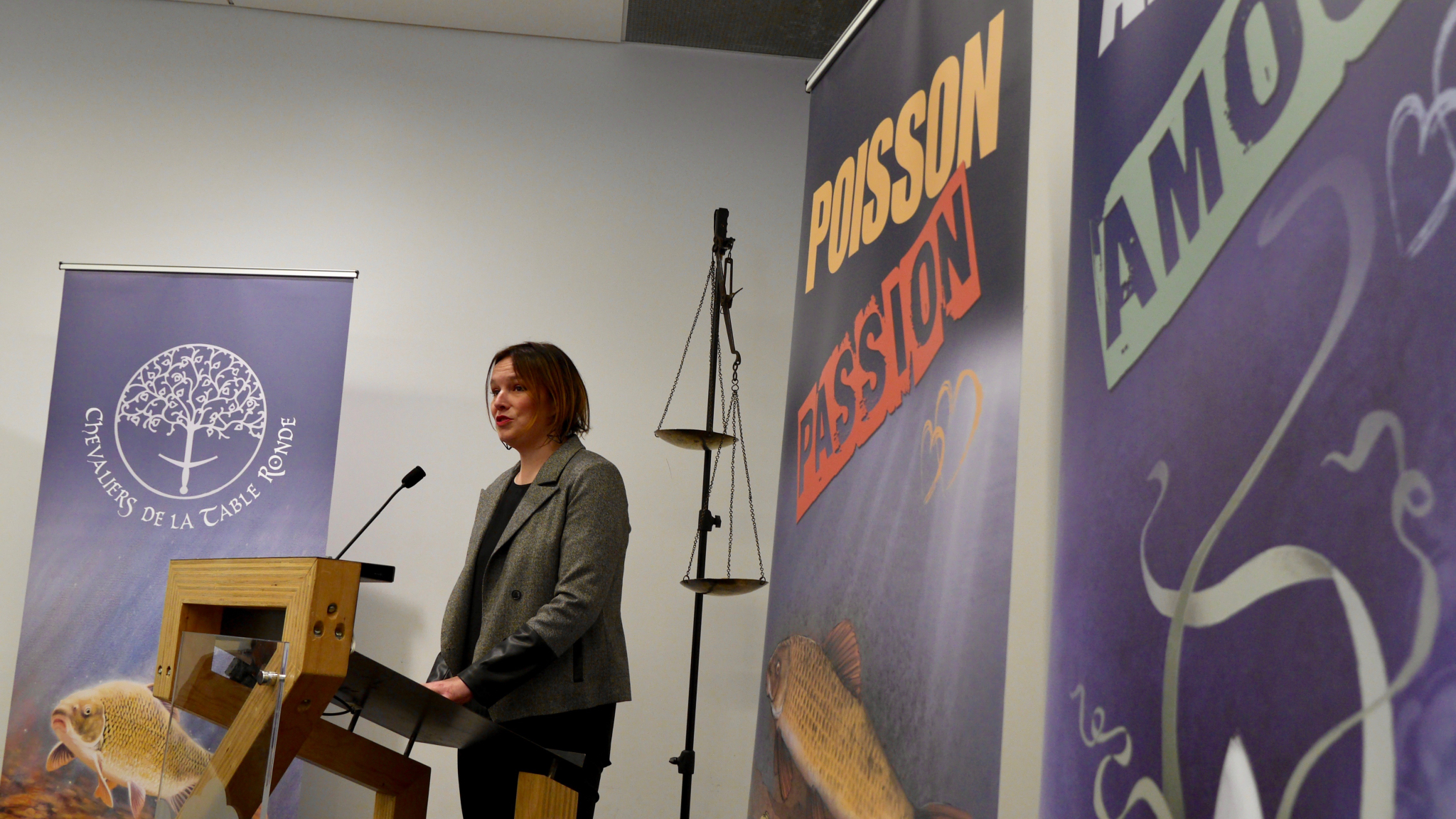 Sophie Paradis, WWF director for Quebec, speaks at a press conference about the expansion of the port of Montreal on Feb. 14, 2017. Photo by Clothilde Goujard
Previous story
Next story

A dozen environmental groups in Quebec are asking Quebec City and Ottawa to stop a major expansion project by the port of Montreal in order to protect two rare species of frog and fish.

The Montreal Port Authority is developing a $750 million container terminal in Contrecoeur, on the south shore of Montreal’s St. Lawrence River. However, an assessment of the project by engineering firm SNC-Lavalin, released on Feb. 1, found that the expansion could have “strong” impacts on two endangered species, the copper redhorse fish and the western chorus frog.

“Our understanding of the project as it is presented in the impact study is that is is unacceptable from an environmental and legal standpoint,” Alain Branchaud, director of the Quebec branch of the Canadian Parks and Wilderness Society, said at the press conference.

Environmental activists are asking Environment Canada to promptly adopt a ministerial order to protect the critical habitat of the western chorus frog on federal land. They also called federal and provincial departments to clarify the application of their environmental laws, including the Species at Risk Act, to the Montreal Port Authority.

Fisheries and Oceans Canada has classified the copper redhorse fish as an endangered species since November 2004. The species lives in Quebec and only a few hundred are still alive.

SNC-Lavalin's research found that the equivalent of 5.5 soccer fields of the fish’s natural habitat of grass bed could be disrupted by the dredging and degradation of water quality if the terminal is built.

The assessment also found that while the port project itself is not on the frog’s territory, future development surrounding the terminal, including the connections of rail tracks with CN rail infrastructure, could “potentially lead to an encroachment into critical habitat.”

Sophie Paradis, WWF Canada’s director for Quebec, said that given Canada’s “disastrous” record regarding its preservation of biodiversity, it was necessary for Quebec City and Ottawa to show more leadership.

“We have all the available knowledge today, all the scientific data, all the best practices in sustainable development to do better and we need to do better together as much in Ottawa as in Quebec City and in local governments,” she said.

The Montreal Port Authority wants to build at first a 675-square-metre deck which would be expanded up to a third and final phase into a 2,000-square-meter deck. It would need to dredge the harbour 11 metres deeper.

In the study, it was stated that the port would compensate for the loss of the copper redhorse habitat by creating or restoring a different habitat somewhere in the region. It added that the compensation plan was not yet identified at this stage.

Activists said the compensation plan seemed to disrespect the legal framework of the Species at Risk Act.

“(They) are going to take into consideration the presence of (these species) once (they) have dredged and destroyed habitats and it's an element that appears to us totally unacceptable,” said Christian Simard, director of Nature Québec.

Mélanie Nadeau, the director of communications of the Montreal Port Authority, said in an email that the administration had been working with Fisheries and Oceans Canada since 2011 and was also currently working with environmental groups specializing in the protection of the St. Lawrence river, on the improvement of the copper redhorse habitat.

“The Montreal Port Authority takes this issue very seriously and plans on putting in place measures to minimize the impacts,” she said.

Nadeau said that the expansion would create about 5,000 jobs during the construction and 1,000 permanent jobs and would generate a total of almost $600 million. The expansion is, according to the Montreal Port Authority, necessary to increase containers capacity given projected growth rates.

Environmental activists said that they disagreed that the port expansion was seen as “inevitable.”

“We pretend that in five years, we’ll be at 85 per cent use (of existing container terminals) but these projections are very questionable,” said Simard.

The group said that the evaluation process itself also worried them.

“At the federal level, it really seems like there’s a reduction in the level of evaluation that this type of major work normally deserves,” said Simard. “It’s not normal that the federal government didn’t engage in a joint commission with experts."

Simard said it was disappointing that the project was not evaluated jointly by the provincial and federal governments as in the past on major projects.

Fisheries and Oceans Canada said that the environmental assessment of the proposed port expansion is being carried out by the Canadian Environmental Assessment Agency (CEAA) and that they will provide expert advice about the application of the Species at Risk Act and the Fisheries Act.

Carole Saindon, spokeswoman for Fisheries and Oceans Canada, said that if the port expansion was approved, the department could consider authorizations to allow activity to proceed even if it encroaches upon the copper redhorse habitat. The environmental assessment would have to ensure that it does not jeopardize survival or recovery of the species in order for that authorization to be given.

But in Ottawa, Environment and Climate Change Minister Catherine McKenna has previously intervened to stop a project that was threatening the western chorus frog. In June 2016, she published an emergency order to block a housing development in La Prairie, on Montreal's south shore to preserve the frog's habitat.

On Feb. 8, McKenna introduced new federal legislation that proposes major reforms to Canadian environmental laws. Her bill includes the introduction of a new Impact Assessment Agency to centralize federal evaluations of major projects and to replace the Canadian Environmental Assessment Agency, which is currently examining the port expansion project.

"We believe we've built a much better system," said McKenna, as she announced details of the bill to reporters. "We need to show the world that we will protect the environment, and that we will attract investment.”

Environmental groups said that since they believe the current project does not respect federal and provincial laws, they are considering legal action if the project proceeds in its current form.

“There’s a certain fatigue that we have to go to courts every time so that the law is respected,” said Simard.

Daniel Green, co-president of Société pour Vaincre la Pollution (Society to overcome pollution) said that he felt environmental groups had to constantly “force” the government to respect its laws.

“It’s a waste of time, of energy and an erosion of democracy,” he said.

With files from Carl Meyer

Note: This article was updated at 9:25 a.m. ET on Monday, Feb. 19, with a correction regarding Alain Branchaud's position.