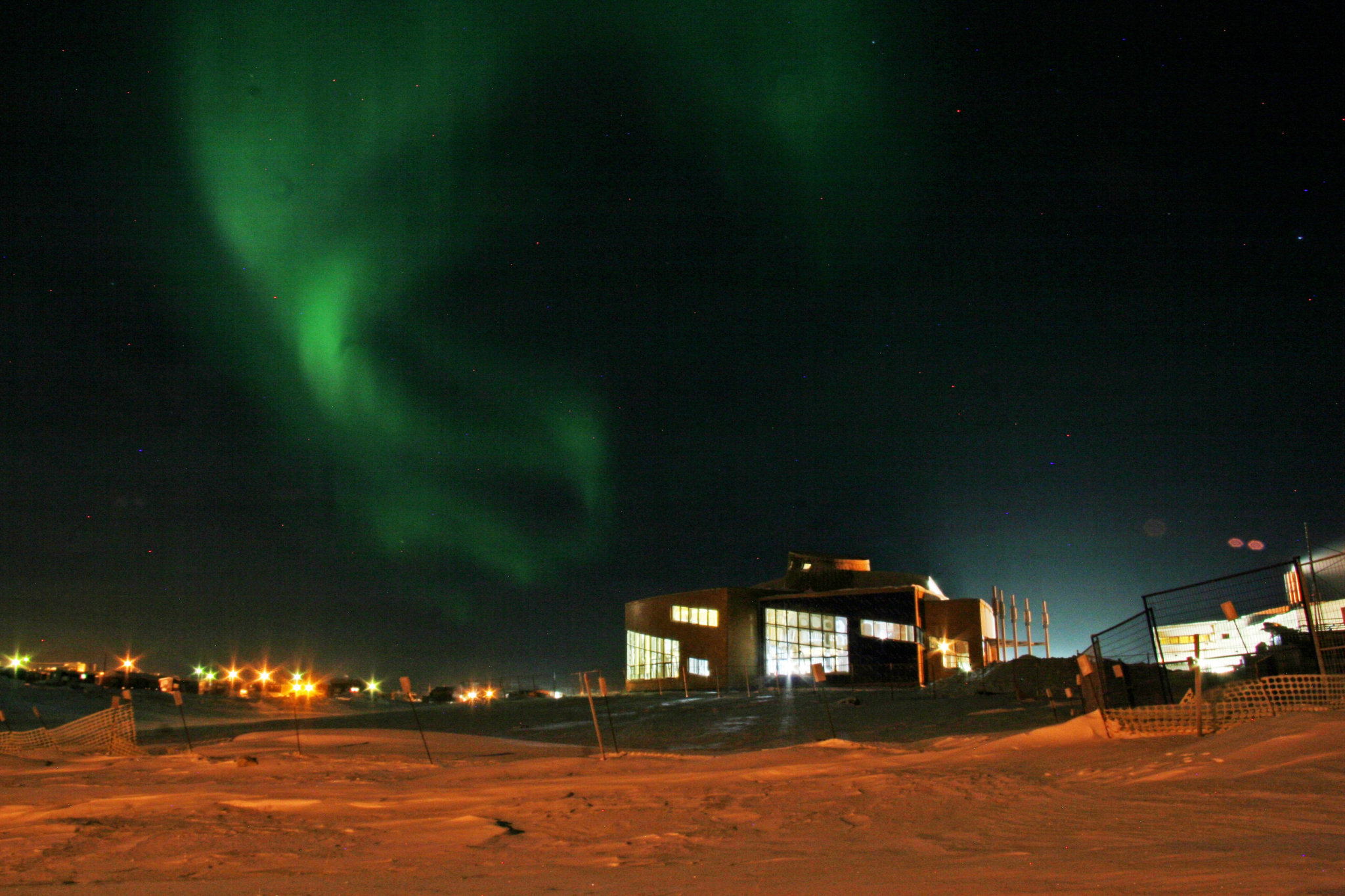 An aurora appears above the Canadian High Arctic Research Station on Dec. 7, 2017. Government of Canada photo
Previous story
Next story

The head of a high-profile government Arctic research agency harassed his organization’s chief scientist and is facing other allegations of harassment, sources have confirmed to National Observer and the Toronto Star.

In separate incidents, another scientist alleged that Scott drove him to take early retirement while a third won a workplace grievance against Scott while working for Scott at the Geological Survey of Canada.

Sources — who spoke on condition of anonymity for fear of reprisals — said allegations against Scott involving his conduct toward Raillard were investigated at the request of the Department of Indigenous and Northern Affairs Canada (INAC). The Government of Canada defines workplace harassment as “repeated and persistent behaviours towards an individual to torment, undermine, frustrate or provoke a reaction from that person. It is behaviours that with persistence, pressures, frightens, intimidates or incapacitates another person.”

Crown-Indigenous Relations and Northern Affairs referred all questions to POLAR, which would not answer questions about Scott or the harassment complaint citing privacy legislation. POLAR declined interview requests for Scott and National Observer and the Star were unable to reach the agency's CEO directly.

In an email, POLAR’s External Communications Manager, Lynn Berrouard, said, “POLAR is committed to establishing and maintaining a respectful workplace as well as the prompt resolution of any complaints in accordance with the Treasury Board policy on harassment prevention and resolution. Any comments would risk disclosure of information which is protected under the Privacy Act.”

The federal government has also confirmed, through two responses to requests under access to information legislation, that someone has complained about harassment at POLAR under a whistleblower protection law. Such a complaint would trigger a separate investigation into misconduct by the federal Public Sector Integrity Commissioner.

PSIC spokesperson Edith Lachapelle declined to confirm whether any workplace grievance against Scott was under investigation.

“We don’t ever talk about ongoing investigations,” Lachapelle said, citing privacy protection for whistleblowers and public servants accused of wrongdoing. She said there are about 35 such investigations underway. She said anyone who experiences, observes or suspects wrongdoing occurring in the federal government can request PSIC investigate the allegations.

The identity of the third party that conducted the investigation for the federal government was not immediately known.

Arctic lab was supposed to be 'world-class' research hub

POLAR will run a multimillion-dollar federal research facility called the Canadian High Arctic Research Station (CHARS) in Cambridge Bay, Nunavut. It is slated to become a critical hub for science and technology issues in the North as the region undergoes rapid changes due to global warming — a key priority area of Prime Minister Justin Trudeau’s Liberals.

CHARS, headed by Scott, will become POLAR’s headquarters which are now in Ottawa. The $204 million facility is being built by Indigenous Services and Crown-Indigenous Relations — the two federal departments that replaced INAC last year. On its website, POLAR says it "will conduct world-class cutting edge Arctic research out of this extraordinary facility."

The CHARS project was first launched by the government of former prime minister Stephen Harper, and was originally a signature piece of the former Conservative government's northern strategy. Prior to the 2015 election, the station was being built under a science plan that noted climate change would create new exploration opportunities for oil, gas and minerals.

POLAR coordinates Canada’s position at key international fora such as the International Arctic Science Committee where climate change projects and research – among others – are discussed and decided upon. Scott represents Canada at the Committee.

CHARS was scheduled to open on Canada Day, 2017. That has been delayed to sometime in 2018.

The claims against Scott come as the Liberal government in Ottawa is looking to strengthen anti-harassment policies for political staffers and workers in the federal public service. Employment and Social Development Minister Patty Hajdu has said the bill will cover “the full range of unacceptable behaviours, from teasing and bullying all the way to sexual harassment and physical and sexual violence.”

Trudeau has also repeatedly stated his government’s “zero tolerance” for misconduct in the workplace.

An award-winning scientist in Arctic ecology, Raillard was chosen as POLAR’s chief scientist in February 2014 following a rigorous hiring process in which dozens of candidates were screened.

In announcing his appointment, POLAR lauded Raillard’s extensive experience including 12 years of living and raising his family in arctic communities; 25-plus years of experience in international arctic science as well as the “coordination of field logistics, guidance of polar expeditions, and leadership of scientific teams in remote arctic locations.”

An article published in September 2016 by Iqaluit’s Nunantsiaq News said Raillard had been on leave since 2015 and that Scott “couldn’t comment on whether Raillard plans to return.”

The chief scientist’s absence left a void in Inuit/POLAR relations according to Scot Nickels, director of the Inuit Knowledge Centre for the Inuit Tapiriit Kanatami, a national Inuit organization.

“He certainly bent over backwards to talk, to understand our perspectives, and explore solutions,” Nickels said. “What’s the best way to handle this for Inuit. What kind of capacity can we build. He was interested in developing a new relationship with, for and by northerners, which I think was the original intent of CHARS.”

A source said Raillard came off stress leave in 2017 and resumed working as chief scientist, reporting to Scott, although he works remotely and not in the Ottawa office.

'I endured about two years of bullying, harassment and humiliation'

A former POLAR employee says he was kept from attending key meetings and conferences, humiliated, bullied and ultimately took early retirement because of David Scott.

“I was at the peak of my career,” says Jean-Marie Beaulieu, formerly the senior science advisor at the Canadian Polar Commission, which became POLAR in 2015.

“I had the privilege of working with scientists all over the world,” before, he says, being “suddenly stripped of my files, placed in embarrassing situations…my position was reclassified, and I was demoted. It was awful.” He also recalls showing up for work one morning to discover another desk had been moved into his office and a new person already working at the desk.

“I endured about two years of bullying, harassment, embarrassment and humiliation,” he says. “I finally had to decide my health was more important.”

When Beaulieu took early retirement in 2014, he says he had to sue POLAR for his severance pay. He dropped another suit for money he says was owed to him from when he was not being paid at the correct level on the advice of his lawyer who told him the suit would be too expensive to pursue. In the end, he says, he burned an entire career of field notes, research and files. “I felt that chapter was closed.”

In another workplace grievance. Peter Outridge, a research scientist with the Geological Survey of Canada, called Scott's management style "divisive" and "vindictive" in an email to the Toronto Star/National Observer. Outridge said that in 2010, Scott denied Outridge permission to attend an ArticNet research conference in Ottawa, which he previously attended annually with management approval to other cities with higher travel costs.

Outridge said he was notified of Scott's refusal the day before the conference started even though ArcticNet had paid his attendance fee and there were no travel costs to attend in his home city.

He was also scheduled to attend a presentation by a PhD student he was supervising; host a panel discussion; judge a poster competition and participate in a climate change impact assessment meeting.

"I came to believe that his refusal was based on personal bias against me," Outridge said.

Outridge took four vacation days to attend the conference. He filed his grievance with the labour relations board, which compensated him for those days in 2015. At the time, adjudicator Michael McNamara called Scott's refusal of Outridge's conference request "difficult to understand."

“Attending scientific conferences is generally very important for scientists,” Canada’s Chief Science Advisor, Dr. Mona Nemer said in an email. While she noted that there is a range of conferences in every field of research, and that “attending every one would be prohibitively expensive, as well as scientifically and professionally unnecessary,” she said these conferences “help scientists stay connected to their domestic and international science communities and remain up-to-date in their fields.”

Editor’s note: Becky Rynor is a freelance journalist who worked as a communications specialist with Polar Knowledge Canada for several months in 2015/2016. None of the information in this article was gleaned from her time at POLAR. Alex Ballingall is a reporter with the Toronto Star.

A CEO from a government

A CEO from a government funded agency harrasses a scientist doing his job. Must have not liked his science. Sounds familiar, where did I hear of that before...ah yes, the Harper dictatorship. Seems things haven't changed under the Tory/Liberal Trudeau...still holding? the coattails of vested interests??? Methinks so.

A little background on Scott

A little background on Scott is in order. Who is he and why and how was he selected for this position, and by whom.

Yes...let's have more on this

Yes...let's have more on this Scott person. All Canadians should be shocked and disturbed to hear their scientists (we ultimately pay their salaries I do believe) are being bullied....and I suspect by someone who is not one. Please. An article on this fellows credentials so we can be informed when writing our Prime Minister to ask for his demotion.

Some more info on this

Some more info on this hemhorroid:
https://ca.linkedin.com/in/david-j-scott-10a30188
Notice an unexplained 19 year gap in his cv.