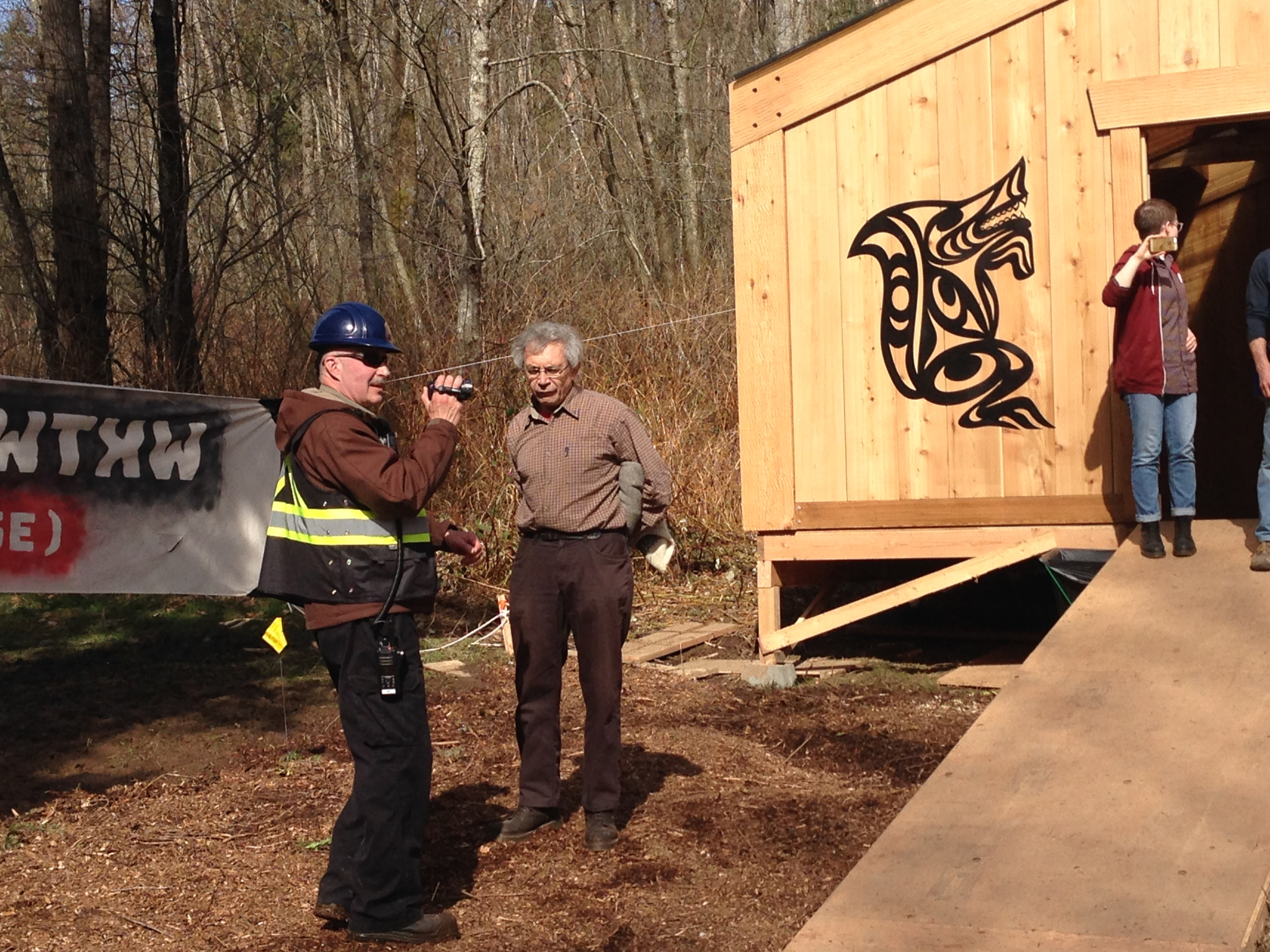 An employee at a Kinder Morgan construction site records the action at the Indigenous Watch House in Burnaby B.C., Mar. 12, 2018. Photo by Carrie Saxifrage
Previous story
Next story

A handful of environmental guardians have politely declined a request to move out of a "Watch House" that was built to keep an eye on Texas-based Kinder Morgan's construction activities on Burnaby Mountain in the Greater Vancouver Region.

The "Watch House" was erected on Saturday during a massive demonstration that brought together thousands of Indigenous Canadians and Americans, politicians and activists to voice their opposition to Kinder Morgan's Trans Mountain pipeline expansion project.

The decision to remain came after workers at the key construction site for the project handed the occupants of the house a copy of a court injunction on Monday and told them to leave within 10 minutes, so that the company could proceed with technical work required to proceed with pipeline.

The project has sparked a large opposition on the west coast due to concerns that it would push Canada's climate change goals out of reach and lead to oil spills. Supporters of the project, including Alberta, which is home to the world's third largest crude oil reserves after Saudi Arabia and Venezuela, say the pipeline expansion is needed to support growth in the oilpatch.

"Once people are handed an injunction, they have 10 minutes to vacate," said one of six employees that descended on the site.

The Kinder Morgan staff then returned to the company's tank farm.

Watch scenes from the Protect The Inlet march and rally Mar. 10, 2018. Video by Trevor Mack

Kinder Morgan said in a statement to National Observer on Saturday that it understood that some people had opposing views on the pipeline expansion, but that the company hoped it could be built in a respectful way.

"We support the right to peacefully and lawfully express opinions and views about our project, and we understand that not everyone supports the expansion," the company said in an email. "But, we're confident we can build and operate this project in a way that respects the values and priorities of Canadians and in respect of the environment."

Canada is not a nation. They

Canada is not a nation. They are a Dominion of the UK. The men who build Canada, don't even pay the fair taxes for the us of lands they think they own ie: Galen, Weston. Irvings etc. The First Nations are actual Nations who's names are on the Treaties. What is Canada doing pretending they have jurisdiction over the TREATY HOLDERS of these lands? The UK already left. Canada is still only a Dominion. Their names are not on the Treaties because they were never a nation!

Well done land protectors! Kinder Morgan has no consent to use this unceded Coast Salish land.

We hear over & over from the

We hear over & over from the Trudeau liberals that massive industrial land-gouging in northern Alberta and disruptive pipelines with the enormous risk of dilbit spills in our coastal waters is in the "national interest." It's revelatory, then, to read that Alberta's crude oil reserves are second only to Saudi Arabia and Venezuela's. Just ask yourself, would you want to live in either of those two countries? A fat lot of good huge crude oil reserves have done them. As Andrew Nikifornuk has demonstrated in many of his writings, huge crude oil reserves are a blight and a curse on the country unfortunate enough to have them and the only thing to do with them in the national interest is leave them in the ground.

and....the question of whether KM has the right to proceed is in the courts right now. And....those court cases involve Indigenous rights. And....municipalities of Burnaby and Vancouver are plaintiffs as well. So maybe injunctions are just irrelevant in the scale of Justice.