By Dylan Sunshine Waisman | News, Energy | March 9th 2018
#5 of 286 articles from the Special Report: Trans Mountain
Indigenous representatives gather for a news conference in Vancouver on March 10, 2018, around a large-scale demonstration planned in Burnaby on Saturday. Photo by Dylan Waisman.
Previous story
Next story

On the eve of a mass protest, Indigenous leaders and activists from across Canada vowed to do whatever it takes to stop the Kinder Morgan pipeline expansion.

Battle lines were drawn as Grand Chief Serge Simon of the Quebec Mohawk, expressed Mohawk, Lakota, and Dakota Nations’ solidarity with West Coast relations. “Tsleil-Waututh is not alone. You think because you’re giving us an injunction that we’re going to run away? Hell no.”

Kinder Morgan has drawn its line in the sand, too, exactly 50 metres away from Kinder Morgan construction. The Texas-based company received a court injunction yesterday to stop protesters from coming within 50 metres of its operations. Indigenous leaders have vowed that the injunction will not impact their fight.

“We have been jailed time and time again for the rights and interests of our grand babies, and there’s no question we probably will again," BC Grand Chief Stewart Phillip said.

The protest is set to begin tomorrow morning at 10:45 AM at Lake City Way Skytrain station in Burnaby.

Rueben George, a spokesperson for the Tsleil-Waututh First Nation, spoke of plans to build a traditional Indigenous "watch house" on Burnaby Mountain during a mass protest planned for tomorrow. The watch house is aimed to "keep our people safe," George said.

Kinder Morgan's $7.4-billion Trans Mountain pipeline expansion project has faced years of opposition from some First Nations groups, the City of Burnaby, the City of Vancouver, and the B.C. government. The pipeline expansion project, if built, would triple the capacity of the existing Trans Mountain pipeline to carry up to 890,000 barrels of petroleum products including diluted bitumen from Alberta to Burnaby, B.C. Proponents of the project say thousands of direct and indirect jobs and millions in tax revenue would be created by the project, but the project has been met with significant opposition in parts of B.C. due to factors such as a nearly seven-fold increase in oil tanker traffic to the Burrard Inlet.

The Tsleil-Waututh are among six First Nations that filed a court challenge to the project last fall, along with the City of Burnaby and City of Vancouver.

Grand Chief Serge Simon expressed Quebec Mohawk, Lakota, and Dakota Nations’ solidarity with West Coast relations: “Tsleil-Waututh is not alone. You think because you’re giving us an injunction that we’re going to run away? Hell no.”

Ta-ah George, a Tsleil-Waututh elder, explained that she was protesting the pipeline expansion on behalf of the wildlife that would be damaged in the event of a major pipeline or tanker spill.

“We are the voice of the ones who can’t speak," she said. "The fish can’t say no to those tankers, and when there’s a toxic spill it’s going to be in the water for 75 to 100 years. The whale pods used to be twenty strong. Now there are three. These are the ones who cannot speak.”

Several reporters asked the panel of leaders about Kinder Morgan's claim to have obtained consent from First Nations along the pipeline’s path.

Laughter echoed through the conference room in response.

“The federally imposed system of Indigenous and Northern Affairs is flawed," Kanahus Manual, a Secwepemc and Ktunaxa activist, said. "Canada and Kinder Morgan continue to say they have consent, and are abiding by their regulatory process, but it is based on the non-recognition of our inherent title and rights. We have title to our territory and nobody can touch that or take it away.”

Melina Laboucan-Massimo from the Lubicon Cree Nation in the Athabasca region in Alberta explained the significance of today’s continent-wide display of solidarity with tomorrow's protest.

“It’s important for there to be Indigenous solidarity from the source of the pipeline, throughout the corridor, and to the terminus, with nations standing together in their opposition to this project.” 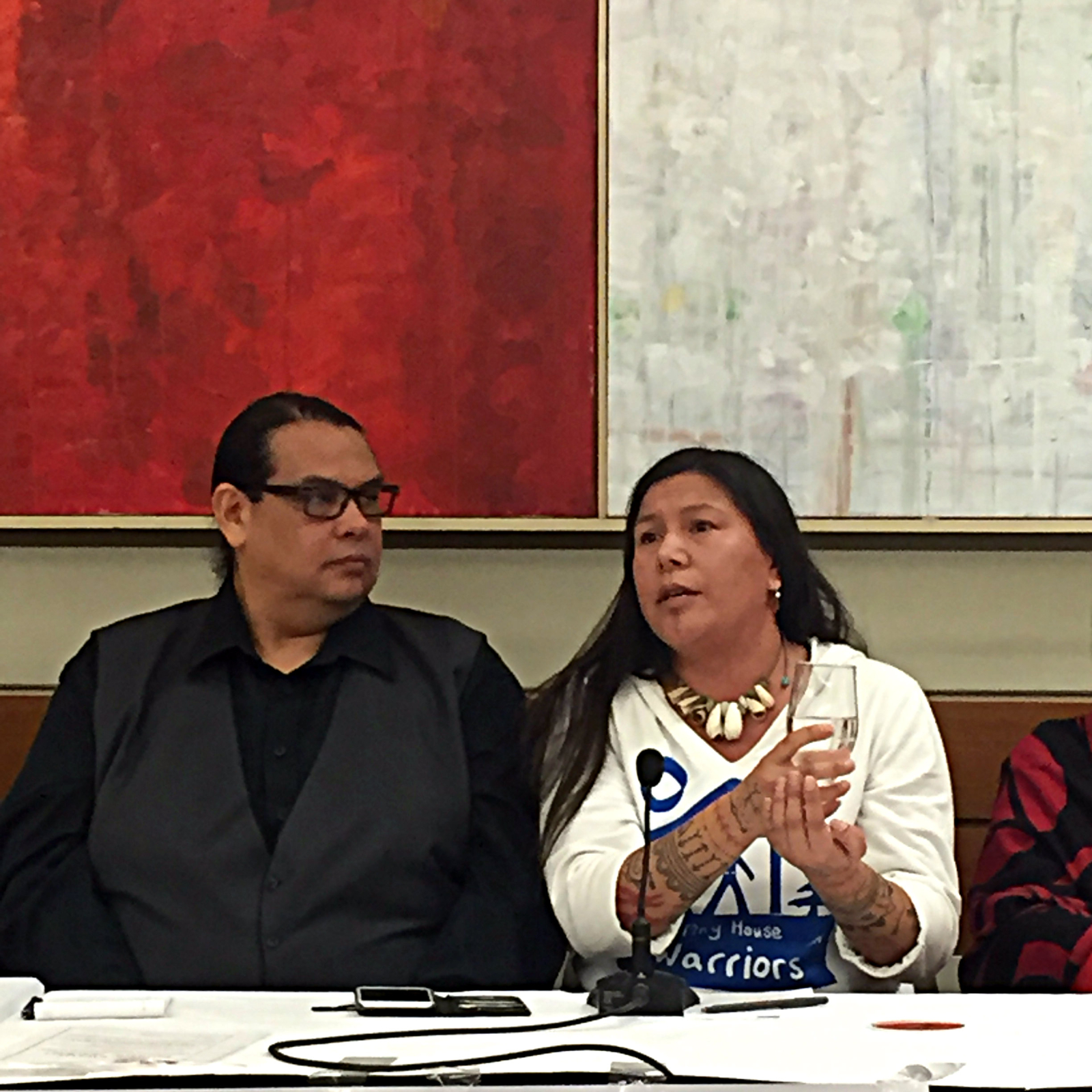 Manual held up a glass of water. "Water is what it's all about. People take this for granted, but there are places around the world, like my sister’s community and the tar sands where they can’t drink the water."

The Tiny House Warriors initiative is to assert Indigenous sovereignty and jurisdiction on the land, she said.

"Kinder Morgan is proposing to bring a thousand workers to start building the pipeline on our lands," she said. "We’re opposed to it and we’re building tiny houses strategically along the path where our food harvesting grounds, medicine harvesting grounds and ancient village sites are being threatened."

It is time for politicians to

It is time for politicians to start facing reality and quit catering to the corporate bottom line: https://canadianviews-ymo.ca/trudeaus-indelible-tory-blue/

I oppose the construction of

I oppose the construction of the KinderMorgan pipeline and the further development in the Athabasca tarsands.

I oppose the construction of

I oppose the construction of the KinderMorgan pipeline and the further development in the Athabasca tarsands.

Is there is a need for

Is there is a need for financial support for the activities that will keep these critically important protests going at a high level? If so would the National Observer please provide a list of sites through which donations could best be made for this purpose. thankyou