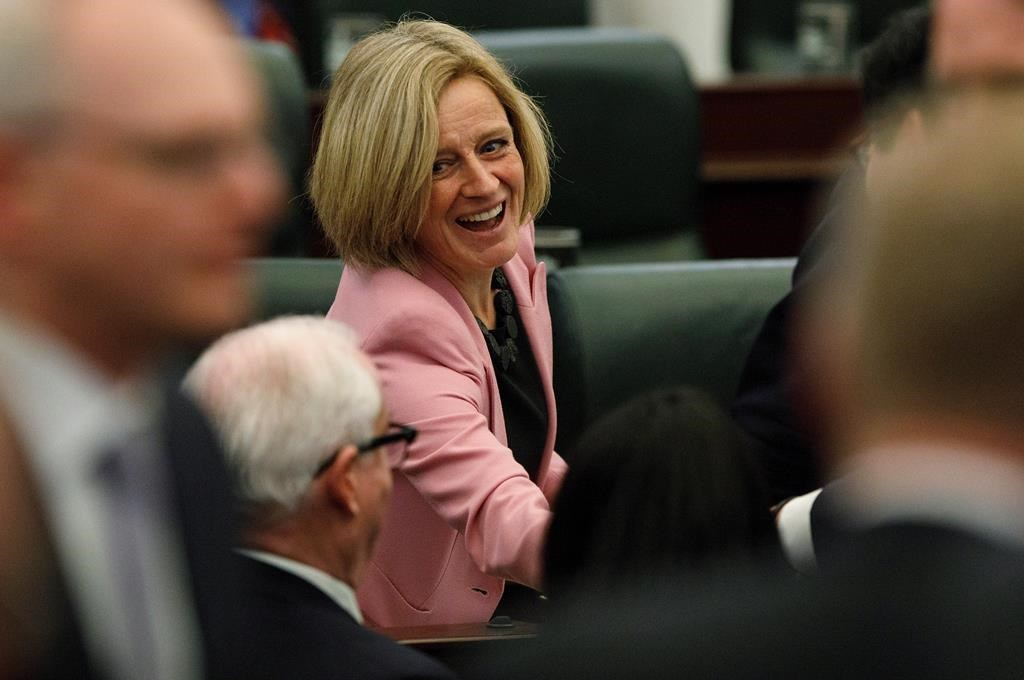 Alberta Premier Rachel Notley smiles in the provincial legislature in Edmonton on March 12, 2018. Photo by The Canadian Press
Previous story
Next story

Alberta Premier Rachel Notley and Opposition Leader Jason Kenney exchanged smiles and brief waves in the Alberta legislature Monday before letting the accusations fly in their first question period together.

Kenney accused Notley of misleading Albertans on her carbon tax while the premier said Kenney and other Conservatives let down all of Canada by failing to get a pipeline built to tidewater while in power in Ottawa.

"They had their chance and they blew it. That won't happen again."

Kenney attacked Notley over the multibillion-dollar carbon tax. He noted Notley didn't campaign on it in the 2015 election. And he questioned its value as a good faith "social licence" gesture given that the Trans Mountain pipeline expansion to B.C., approved by Ottawa, is still facing delays from the B.C. government.

"(Notley) told Albertans if we just pay more for everything somehow magically pipeline opponents would become pipeline supporters and pipelines would get built," said Kenney.

As per the noisy, raucous parliamentary tradition, Notley's answers were met with cheers and desk thumping from her caucus members.

Kenney's questions and comments, however, were met with silence from his team and there was no cross-aisle heckling of Notley.

Kenney later told reporters that's how he wants it.

"I think people who tune in actually want to be able to hear their legislators and what they are saying. Just endless, pointless background noise inhibits that," he said.

"My observation as a regular Albertan watching this assembly (before) was I couldn't hear half of what they were saying with all the thumping going on."

Kenney and the UCP caucus members focused on the carbon tax during question period. Kenney said it will be the theme during the spring sitting and up to the next election in the spring of 2019, and has promised to scrap the tax if he becomes premier.

Notley has been locked in a battle with B.C. Premier John Horgan's government over what Alberta terms delay tactics on the pipeline, including court challenges in an area that Notley says is clearly an area of federal responsibility.

Last week, Notley announced Alberta will consider curtailing the flow of oil if B.C. continues its tactics, an idea that Kenney had been touting for weeks.

After question period, all sides debated a government motion to urge Ottawa take action to get Trans Mountain approved and to support the province in its effort.

"At every step along the way, our government has made the case to Canadians (for energy development and pipelines)," Notley told the house after introducing the motion.

Kenney has promised to elevate the decorum from his caucus the house, hence the impromptu cross-aisle wave to the premier.

"I intended to actually go over and shake her hand but then all of my guys started shouting at me," said Kenney. "Apparently you can't cross the floor, metaphorically speaking, here.

"I just wanted to salute her. At the end of the day we're going to disagree on a lot of things, agree on some, but we don't have to be nasty about it."

Shock and oil: Alberta premier threatens to turn off taps in B.C. dispute