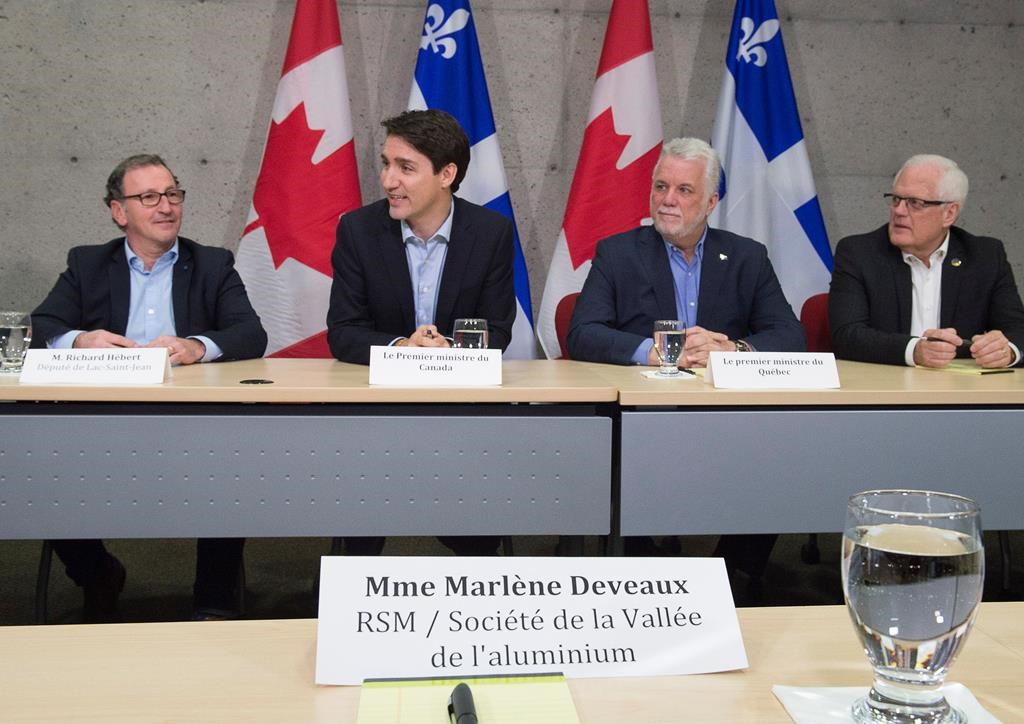 President Donald Trump urged the quick completion of the NAFTA negotiations in a phone call with Prime Minister Justin Trudeau on Monday, amid indications the U.S. wants a deal wrapped up this spring.

Trudeau called his American counterpart during a tour of aluminum facilities in Quebec, on a day the prime minister did American television interviews to promote the integrated Canada-U.S. economy.

What he heard directly from the president echoed public remarks from Trump's administration: the U.S. trade czar recently said he wants a new NAFTA concluded within weeks, because of upcoming elections in the different countries.

The U.S. has said further delays might imperil the negotiations, with an outsider candidate leading polls for Mexico's July 1 election, and with Trump's party in danger of losing control of the U.S. Congress.

"We recognize that the American side is eager to get forward motion on NAFTA," Trudeau told CNN's Anderson Cooper, in one of his U.S. interviews.

Trudeau said tariffs on Canada would have made it harder to get a deal, and said he raised that with the president. He also credited Trump for keeping a promise: he said the president told him at last year's G7 that Canada would get an exemption, and kept his word.

NAFTA talks might now enter an intense phase: "President Trump emphasized the importance of quickly concluding the ongoing NAFTA negotiations," said a readout from the White House on Monday's call with Trudeau.

"(That would) ensure the vitality of United States and North American manufacturing industries and ... protect the economic and national security of the United States."

But some veterans of the original NAFTA have expressed doubt that it's feasible to complete a deal by spring; that's what it would take to complete the ratification procedures during the current Congress that leaves office this year.

Trudeau is also brushing off the idea that Canada might be bullied into a deal.

The U.S. government has been dropping hints that the decision to excuse Canada and Mexico from tariffs on steel and aluminum might only be temporary, and somehow dependent on the result of trade negotiations.

Trudeau told another U.S. network that he sees them as separate issues: ''We don't link together the tariffs and the negotiations with NAFTA," he told CNBC in an interview from a Quebec aluminum plant Monday.

Trudeau also rejected the idea that the tariff exemption was some kind of benevolent American favour that required repayment. In Trudeau's view, the U.S. wasn't just helping Canada — it helped itself by refraining from slapping tariffs on its No. 1 supplier of both steel and aluminum.

''The exemptions aren't a magical favour that was being done (for Canada)," Trudeau said.

"(We're) highlighting that the imposition of tariffs on Canada would end up hurting the U.S. almost as much as it would hurt Canada.''

Trudeau's view has prominent support: A poll of leading economists from the University of Chicago has found rare unanimity on the topic, with a newly released survey Monday showing that zero per cent of economists surveyed believe tariffs will help Americans.

He made the point by mentioning in his CNBC interview that he was a few kilometres from the Bagotville air force base, built during the Second World War to protect critical aluminum supplies required by the military.

On the subject of national-security tariffs, Trudeau told CNN: "Canadian aluminum is in your fighter jets. Canadian steel is in your tanks. There is no better security partner in the world... So that whole issue of national security is off the table.

The prime minister is on a cross-country tour of aluminum and steel factories to demonstrate his government's support for workers in light of potential threats to those industries from the U.S. administration.

Other stops will include Hamilton, Sault Ste. Marie, Ont., and Regina.

The Trump administration has set tariffs of 25 per cent on steel and 10 per cent on aluminum, applicable to every country except Canada and Mexico. While the penalties take effect later this month, Trump has encouraged countries to try negotiating exemptions for themselves.

Canada is the United States' largest foreign provider of steel and aluminum, with about 85 per cent of Canadian exports being directed to that country.

— With files from Giuseppe Valiante