Canadian farmland at risk due to speculation, senate report says 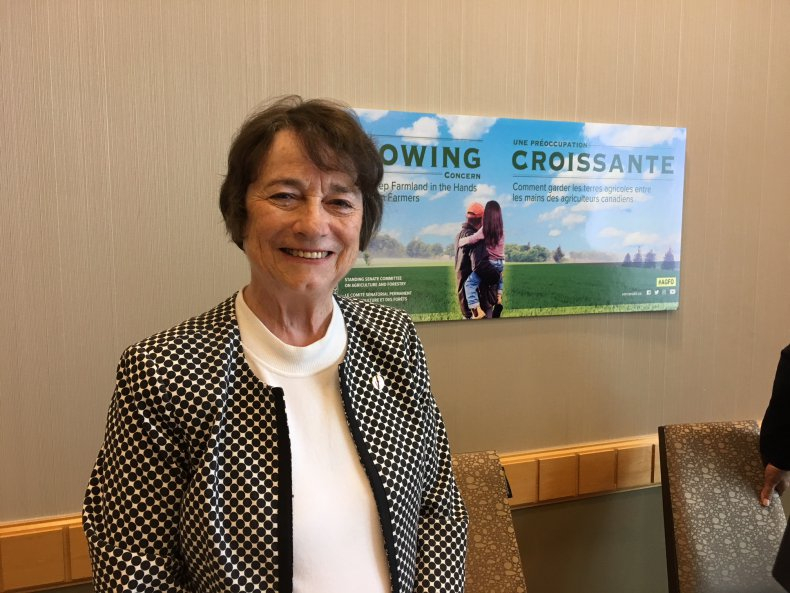 Canadian Senator Diane Griffin is chair of the Senate Committee on Agriculture and Forestry. Photo by Tracy Sherlock.
Previous story
Next story

Food is as fundamental to life as water and air.

But in Canada, our food supply could be at risk because farmland is being bought up by speculators, such as pension funds and foreign investors. This phenomenon is driving up prices, making farms unattainable for young farmers and threatening the viability of the family farm, a new Senate report has found.

“The price has gone up astronomically,” Senator Ghislain Maltais told reporters at a Vancouver news conference. “If we do not do our part in feeding the world, the world will come to us and feed itself.”

Maltais and Senator Diane Griffin were in Vancouver releasing the Senate committee report, A Growing Concern: How to Keep Farmland in the Hands of Canadian Farmers.

“Farming is a challenging way to make a living at the best of times,” said Griffin, chair of the Senate Committee on Agriculture and Forestry. “Farmland prices are being driven up because people and companies are buying them for something other than (growing food.)”

The rising cost of farmland is becoming a deterrent for young farmers, Griffin said. At the same time, the high prices of agricultural land are an incentive for farmers to sell to the highest bidder rather than passing on their farm to a family member or selling it to a young farmer. This is compounded by financial institutions, investment funds and foreign multinational companies buying up Canadian farmland, which drives the prices up more and turns farmers into employees rather than owners of their land.

Such speculation is a “serious issue,” Maltais said.

“We must make sure that farmland does not belong to foreigners – that it belongs to those who farm the land,” Maltais said.

Also, urban sprawl is infringing on farmland, the report found.

People from British Columbia told the committee that foreign investment is being used to grow food for export to other countries. One witness said that foreign company bought more than 10,000 acres on 41 properties in the Nechako Valley of B.C., near the town of Vanderhoof.

Farmers deserve the country's support to keep family farms in their families and to make sure it’s possible for young folks to get started in farming.

“The company that bought that did so for the purpose of producing large square bales, compressing them and shipping them to China,” Mark Parker, Area D director and chair of the Agriculture Committee in the Regional District of Bulkley-Nechako said in the report.

“In the future, we have the moral duty to produce far more than we do now,” Maltais said.

Also in B.C., carbon pricing has led to multinational companies to buy agricultural land for reforestation and carbon sequestration, the report says.

In 2011, the average age of Canadian farmers is estimated to have been 54 years old, so they will be looking to retire relatively soon. Often, selling the farm is the only pension plan farmers have, Ron Bonnett, president of the Canadian Federation of Agriculture, said in the report.

The total value of farmland and buildings in Canada was estimated at $276 billion in 2011, the Census of Agriculture found. An acre of farmland costs $10,000 in Ontario and $5,400 an acre in B.C. Those values went up about 10 per cent in 2015, across the country, the report found.

Another pressure on farmland may occur when recreational cannabis is legalized, however Maltais said cannabis can be grown anywhere and doesn’t need to take up land that is used to grow food.

“Marijuana does not have to replace salad or carrots or wheat,” Maltais said. “Marijuana is like a weed, it grows everywhere.”

In order to make it easier for new farmers to buy farms, the committee recommends increasing the lifetime capital gains exemption from its current level of $1 million for qualified farm properties.

“This report has been published for the future – our next generation,” Maltais said.

When asked how urgent the issue is, Griffin said the rising value of farmland is “exceedingly important,” both in terms of food supply and Canada’s ability to trade internationally.

“This vital industry and way of life will begin to wither,” Griffin said.

Suggestions were also made to protect farmland at the provincial level, as well as recommendations to strengthen the financial capacity of farmers. Cooperation between the federal and provincial government and strengthened legislation could better protect farmland for agricultural uses, the report says.

While the senate committee was in Vancouver, it also heard from witnesses about the effects of climate change on the agriculture and forestry sectors, for a future report.

Hannah Horn, manager of special investigations for the Forest Practices Board, said climate change is contributing to the intensity of wildfires and there is insufficient funding to protect communities.

“Climate change is so pervasively affecting everything,” Horn said. “There is a lot of discussion around planning and making sure we are doing this consciously to make sure we’re doing the best thing for the forest of the future.”

Horn suggested that the federal government could help with research and that the country could benefit from creating a public climate change watchdog, who operates at arms-length from the government.

“Dealing with an ever-changing climate is at the core of what farmers do. What has changed is the complexity of farming and the speed at which it is changing,” Vander Waal said. “Conditions are changing faster than we have seen in the past.”

Pinder Dhaliwal, president of the BC Fruit Growers’ Association, told the senators that climate change is leading to weather events that are more extreme and more frequent. Insurance doesn’t always cover various weather events, particularly when they are unprecedented, such as extreme wind that damaged fruit crops in 2015, flooding, frequent periods of intense rain and smaller fruit due to heat stress, he said.

The senators paint an urgent picture of Canada’s future food security, one that demands action and attention. Canadians should control their own food production and farmers, not pension funds, are the best people to do this. Farmers deserve the country's support to keep family farms in their families and to make sure it’s possible for young folks to get started in farming.

Tracy Sherlock writes about B.C. politics for the National Observer. Contact her at [email protected] with story ideas and tips.

Quebec portion of the Canadian Agriculture Partnership launched in Montreal

What ever happened to the

What ever happened to the Foreign Investment Review Agency? We need such a body to control where our farmland and our other resources go, how they are extracted and who benefits.

Canada's food security has been an issue for about 8 decades as more and more of our scarce top-grade ag land has been buried under asphalt. Because of the ability to move fresh-like food over vast distances, we allowed ourselves to ignore food security. This cannot continue. By permitting foreign buyers to purchase and farm land with a view to supplying only their own domestic market, we are committing a foolish act, contrary to this country's best interests. If we were talking about materiel, the government would have to give specific case-by-case permission, but, because we are `just' talking about farmland, it's wrongly considered unimportant.
I realise that the non-farming community think that all farmers are swimming in cash but a look at the books would change that way of thinking for most. Hereabouts, I hear folks commenting on that new $60000 `pick-up'. What they don't realise is that truck is not for fun or commuting - it's a piece of industrial equipment. I expect the slight resentment felt towards the `rich' farmer colours the way we think about this whole issue.
Although I am not a farmer (being a girl), I come from a long, long line of agriculturalists - centuries - and this disinclination by governments to really come to grips with the issues facing the farming community encourage people working the family farm, to wonder if it wouldn't be better to just throw in the towel. And that's how we got here.

The Chinese are gobbling up

The Chinese are gobbling up arable land around the world wherever they can. I suppose with its giant population this makes sense, but if we lose the ability to keep agricultural products in Canada by selling the land to the highest bidder we are courting future disaster. Trudeau's love affair with China (selling care homes, construction companies and possibly strategic government communications) is becoming downright scary given that China is poised to became an even more authoritarian dictatorship.

All this has happened because

All this has happened because farming has a breathtakingly low rate of return for investments made and risks taken. Many farmers need a full-time off-farm job to pay the bills and farm in their "spare" time. For those with better off-farm jobs the farm helps them build farm assets while lowering their taxable income. Get that? Farmers get so little for what they produce that it often doesn't make sense as a business, just as a tax management strategy. Not that food prices necessarily have to go up a lot: most of the money goes to the oligopoly of corporations that buy what the farmer produces or the oligopoly of corporations that sell the inputs for our input-intensive industrial farming. Instead of (or as well as) having government reviewing transactions (and not just foreign -- domestic hedge funds are buying up vast tracts of farmland too), wouldn't it be nice if the people who feed us (or want to feed us) made enough money feeding us to have more agency in the farmland real estate market?