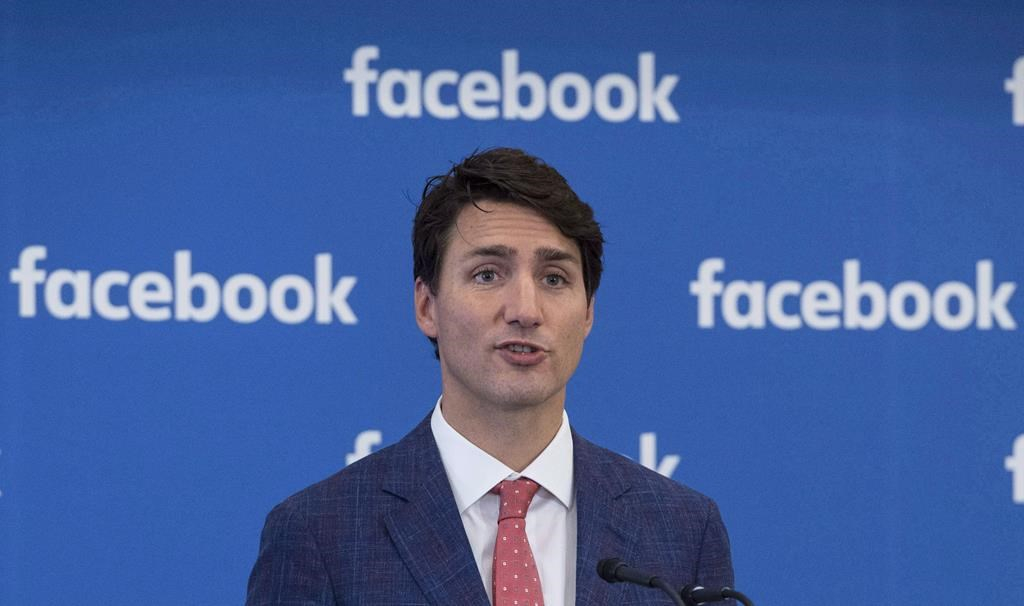 Prime Minister Justin Trudeau speaks at an event at McGill University on Sept. 15, 2017 to announce a new lab to be launched by Facebook in Montreal. File photo by The Canadian Press
Previous story
Next story

The Trudeau government is turning to its spy agency and high-tech cybersleuths to ensure that the privacy rights of Canadians are being protected as revelations swirl about Facebook data being exploited for political gain.

And Scott Brison, the acting minister for democratic institutions, says he would also be open to strengthening federal privacy laws even further to better protect those who share their information online.

Policy-makers around the world are grappling with the implications following media reports that data collected by Facebook and other social-media companies is being harvested and used to influence elections.

Recent reports by The New York Times and The Observer of London say Trump's 2016 campaign hired Cambridge Analytica, which crunched private information it inappropriately collected from the Facebook profiles of more than 50 million users.

Wylie has said in media interviews that the company used the information to profile voters and has alleged the company took fake news to the next level. The company denies any wrongdoing.

Facebook's alleged data seepage has created worries in Canada, where the country's largest provinces are set to go to the polls this year and a federal election sits on the horizon for 2019.

"Social media platforms have a responsibility to protect the privacy and personal data of citizens, and to protect the integrity of our electoral system where they operate."

Brison said he planned to meet with CSE and also the Canadian Security Intelligence Service (CSIS), the national domestic spy service, to consider the global environment and assess threats to the electoral system and the protection of personal information.

And while he said Canada already has strong privacy laws, Brison said he'd be open to making further changes if necessary.

The government has also contacted Facebook to find out if any Canadians were among those affected by the data breach and to call on the company to explain how it will ensure this kind of event doesn't happen again, said a spokeswoman for Brison.

New Democrat MP Charlie Angus said Monday that if information giants like Facebook have the potential to distort the outcome of elections, they need to be held to account.

Angus said he believes Facebook has a legal international responsibility to protect users' information from bad actors looking to use it for nefarious purposes.

"Facebook seems to have a very cavalier attitude towards the protection of private information," Angus said.

"What's come out of the allegations against Cambridge Analytica was the ability to subvert Facebook to use the stories, the chats that people have, to create the perfect propaganda machine."

Angus said the time has come for the creation of a global national framework to deal with social-media companies that hold vast stores of personal information —and wants Prime Minister Justin Trudeau to raise the issue when Canada hosts the G7 summit in June.

During question period Tuesday, Trudeau said he's had many discussions in the past with his G7 counterparts about privacy issues and democratic concerns related to social-media companies.

On Monday, Privacy Commissioner Daniel Therrien said his office would contact Facebook to find out whether the personal information of Canadians was affected by the major data leak involving the global social media platform.

Therrien has also said his office has offered to assist an investigation into the matter already launched by the U.K. information commissioner's office. He said his ultimate goal is to ensure that the privacy rights of Canadian Facebook users are protected.

A British parliamentary committee is also summoning Facebook CEO Mark Zuckerberg to answer questions on fake news as authorities step up efforts to determine whether data has been improperly used to influence elections.

The newspaper reports said Facebook first learned of the breach more than two years ago, but didn't disclose it until now.

Cambridge Analytica has "strongly denied" the allegations that it had improperly obtained Facebook data. It has also denied that the Facebook data was used by the Trump campaign.

When you sign up for Facebook you give Facebook permission to go through your devices, collecting anything they want (including turning on your GPS to find out where you are) and using the information however they want. Read their terms of service. Therefore I think the companies are all correct that there is no wrongdoing: Facebook's users gave prior consent (it's not the companies' problem if people didn't read what they were consenting to). The big struggle a decade ago was to find viable business models for all the free stuff on the internet; this is one such model.