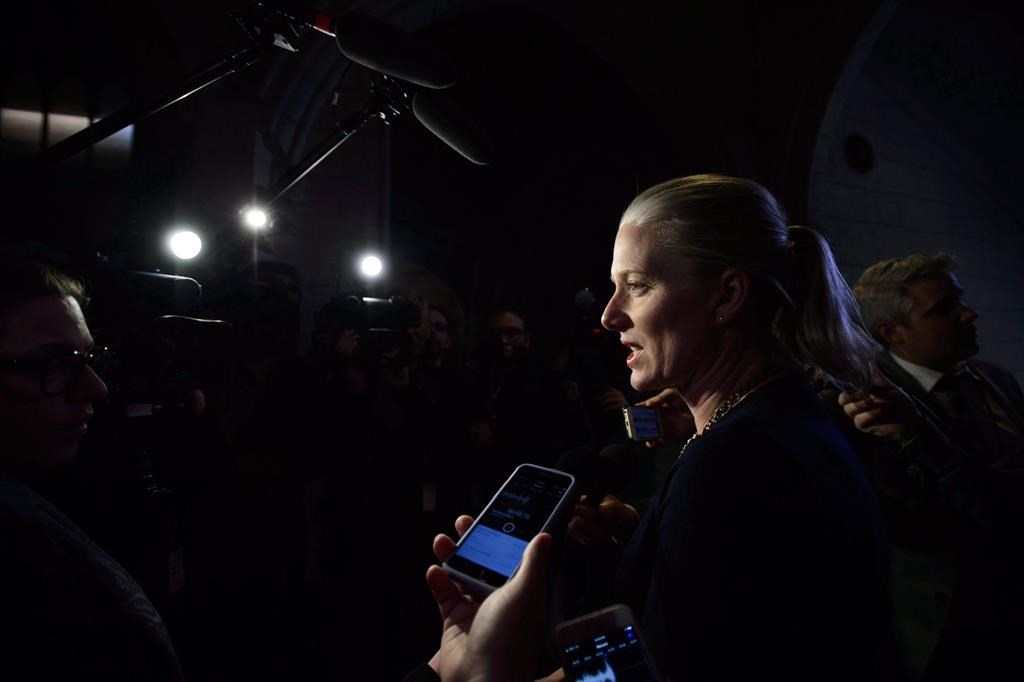 Minister of Environment and Climate Change Catherine McKenna speaks to reporters in the foyer of the House of Commons on Parliament Hill in Ottawa on March 27, 2018. Photo by The Canadian Press/Sean Kilpatrick
Previous story
Next story

No province has yet shown interest in signing on to the federal government's carbon pricing system instead of creating their own, potentially setting up a log jam for Ottawa to meet its deadline for every province to have a $20 a tonne price on pollution by Jan. 1.

Environment Minister Catherine McKenna told provinces last fall they had until the end of March to ask to use the federal backstop, in part, a government official says, to give Ottawa as much time as possible to get the system in place in time.

But as of Thursday, no province had put its hand up.

Nor has any province submitted their own plans for assessment to see if they meet McKenna's requirements for carbon pricing under the Pan Canadian Framework on Clean Growth and Climate Change.

British Columbia, Alberta, Ontario and Quebec already have their own carbon pricing systems in place. Manitoba's carbon tax will take effect in September and Nova Scotia has a cap-and-trade system set to kick in Jan. 1.

New Brunswick's current plan is to use its existing gas tax as the equivalent of a carbon tax, but McKenna has already said that won't cut it, so it is one of the provinces ripe for having the federal system imposed on it.

Saskatchewan Premier Scott Moe is adamant his province won't introduce a carbon tax and has threatened to sue if Ottawa tries to impose one.

Provinces have until Sept. 1 to submit their plans to McKenna's office so they can be assessed to determine if they meet her requirements under the Pan Canadian Framework for a carbon price. It was supposed to be $10 a tonne by this year, but it has been delayed and will start at $20 a tonne on Jan. 1. It is to rise at least $10 a tonne each year until 2022, when it will be reassessed.

The legislation to do this was included in this week's federal budget implementation bill.

Ottawa is allowing every province to create their own system to meet the requirements, but if those plans don't jibe with what Ottawa wants, the legislation creates a system known as the federal backstop that will be imposed instead. Provinces can voluntarily choose the backstop if they want, but right now nobody seems to be keen for that.

A government official speaking on background said the March 30 deadline was really just an effort by Ottawa to get a jump on things, but she acknowledged the department will probably be scrambling in the fall if too many provinces don't meet the federal requirements.

She said it's expected it will take about four months to implement the backstop in a province, including several weeks for the paperwork and at least two months to get all the fuel distributors registered. The tax is to be charged at the producer or distributor level and passed on to consumers down the chain.

The federal program has a separate system for heavy industry, which will see emissions caps set based on average emissions in an industry and the tax charged on any emissions above the cap. Companies which emit less can get and sell credits for being under the limit.

Ottawa has guaranteed any carbon tax revenues raised in a province will stay in that province. However, if the federal backstop is imposed, Ottawa will decide how the money is spent in that province. McKenna and Prime Minister Justin Trudeau favour sending direct rebate cheques to individuals, bypassing the provincial government entirely.

McKenna has however promised that jurisdictions which volunteer to use the federal backstop can decide how they want to use the money themselves.

The carbon price is part of Ottawa's plan to cut emissions to meet its targets under the Paris accord, which aims to keep global warming below two degrees compared with pre-industrial times.

Canada has committed to reducing its emissions another 200 million tonnes by 2030, which is the equivalent of what 44 million cars emit each year, twice as many cars as there are registered in Canada.

Conservative environment critic Ed Fast is highly critical of the carbon price, saying despite repeated requests McKenna has not been able to show how much emissions the carbon price will save.