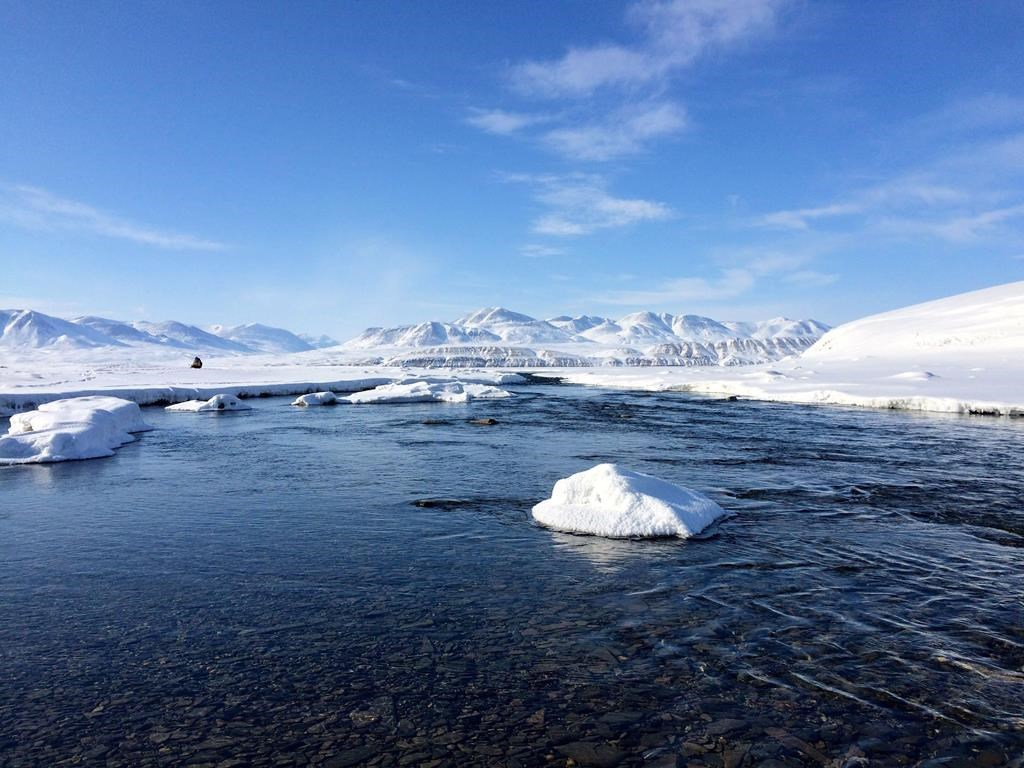 Lake Hazen on Ellesmere Island in Nunavut is viewed from the Ruggles River outflow in this May 2015 handout photo. Handout photo by Igor Lehnherr
Previous story

Climate change could be altering northern ecosystems more quickly and profoundly than anyone surmised, suggests a study that focused on a large Arctic lake.

"Everything is so intricately connected," said lead author Igor Lehnherr of the University of Toronto. "You warm the region and it has this domino effect on the entire watershed."

The study, published recently in the journal Nature Communications, keyed in on Ellesmere Island's Lake Hazen, where summer temperatures have risen by about one degree since 2000. It brought together a large team of scientists to look at effects of the temperature increase on the area's overall ecosystem.

Despite Lake Hazen's size — it holds more water than any other lake in the High Arctic — impacts are already profound and wide-ranging with no precedent for at least the last 300 years.

Meltwater and sediment are flowing into the lake at 10 times the historic rate. So are contaminants such as mercury.

Large areas of permafrost that were once solid year-round now melt in the summer. Ice-free days have increased and the lake averages three more square kilometres of open water every year.

Shorelines have risen by about a metre, and nearly four times as much water is flushing into the river that drains the lake.

The lake's food web is changing. Algae are blooming, but Arctic char are deteriorating, perhaps because the water has grown murkier.

"The lake is waking up," said co-author John Smol of Queen's University, who confesses he was surprised at the speed and breadth of the changes despite such a small temperature increase in such a big lake.

"Things are really changing fast and it didn't take much."

Lake Hazen was an ideal test subject for the unique interdisciplinary study.

Despite its remote position at the northern end of Canada's most northern island, scientists have been camping by the lake's frigid shores since the 1950s. That's given them decades of solid data.

As well, it's located within Quttinirpaaq National Park, which protects the lake from the direct influence of humans.

Lehnherr cautions against concluding all Arctic lakes are going through exactly the same changes as Lake Hazen. Conditions differ across the North and so will the effects of warming.

But the basic finding is likely to be widely applicable, he said.

"Most of the Arctic lakes are likely representative of fragile ecosystems and are going to be sensitive to warming," Lehnherr said. "They're likely already experiencing impacts.

"It didn't take a huge amount of warming to see impacts. One degree was enough."

Smol described the changes as stunning.

"Nature doesn't go in slow, gradual changes — it hangs on and then reaches a threshold and goes for something completely different."

"I don't know what a lot of these Arctic lakes are going to look like," said Smol, who's been studying them for more than 30 years.

"It's very hard to say what's better or worse. This lake is going from its natural state to a new type of regime.

"That worries me. Humans have a very poor record of altering ecosystems."

As temperature in the

As temperature in the northern part of Canada is getting warmer than in the rest of Canada, scientists are getting more and concern about the effects of a warming climate on peatland ecosystems in the Boreal and Subarctic regions of Canada.
The combined Boreal and Subarctic regions contain 97% (142.94 Gt) of the soil organic carbon mass occurring in Canada's peatlands. The peatland sensitivity model indicates that approximately 52% (74.16 Gt) of the organic carbon mass in these two regions will be severely to extremely severely affected by climate change.
(source: Canadian Water Resources Journal, Charles Tarnocai, Agriculture & Agri-Food Canada, Ottawa, May 2009)
Peat fires are already contributing significantly to carbon emissions in Canada. Deep-burning peat fires have the potential for even higher emissions, as the carbon density of peat increases exponentially with depth. Peat fires can also be difficult to extinguish, and severe fires in peatlands can last for months. Peat fires release significant amounts of carbon dioxide and other greenhouse gases. In addition, peat fires release mercury into the atmosphere at a rate 15 times greater than upland forests, which may be a serious human health concern.
(source: Natural Resources Canada, 2013-12-04: "Peatland fires and carbon emissions")
Human impacts, such as climate change and the draining of wetlands (for industrial purposes like the tar sands), are increasing the overall susceptibility of peatlands to fire. It took over a year for firefighters to finally completely extinguish fires (especially peatland fires) after a forest fire devastated parts of Fort McMurray.
Werner Kurz, a senior research scientist at the Canadian Forest Service and head of its carbon accounting team, estimates that for every hectare of forest land consumed in a fire like the Fort McMurray fire, 170 tons of carbon dioxide equivalent (CO2 eq) emissions are released into the atmosphere. It means that this single fire would have contributed to some 85 million tons (Mt) of CO2 eq emissions. In 2015, total Canada's GHG emissions were estimated at 722 Mt. This single fire would have accounted to around 11.8% of Canada's total emissions.
In 2015, a total of 7,068 forest fires burned about 3.9 million hectares of forest in Canada. At 170 tons of CO2 eq per hectare burned, forest fires would have had 663 Mt of CO2 eq emissions to Canada's total GHG emissions. Since over the years, Canada's forests have become a net "source" of carbon instead of a "sink", the federal government under the Harper administration decided not to take into account (as required by the Kyoto protocol) GHG emissions from "natural disturbances" (e.g. wildfires, insect infestations such as the mountain pine beetle, melting permafrost, forest degradation, etc.) into its annual report on Canada's GHG emissions.
The actual federal government went even further, writing in a footnote (section5.1) in its annual report on Canada's GHG emissions to the UNFCCC (April 2016) :" Canada has indicated that its accounting for managed forests towards its emissions reductions target will exclude the impacts of natural disturbances because these impacts are non-anthropogenic." What the actual federal government is saying is that human activities have no impacts on forest fires or the melting of permafrost. This statement is in total contradiction to what federal government scientists and other researchers in the field have been observing over the years.

'These things are costing us:' Arctic climate change affecting the south