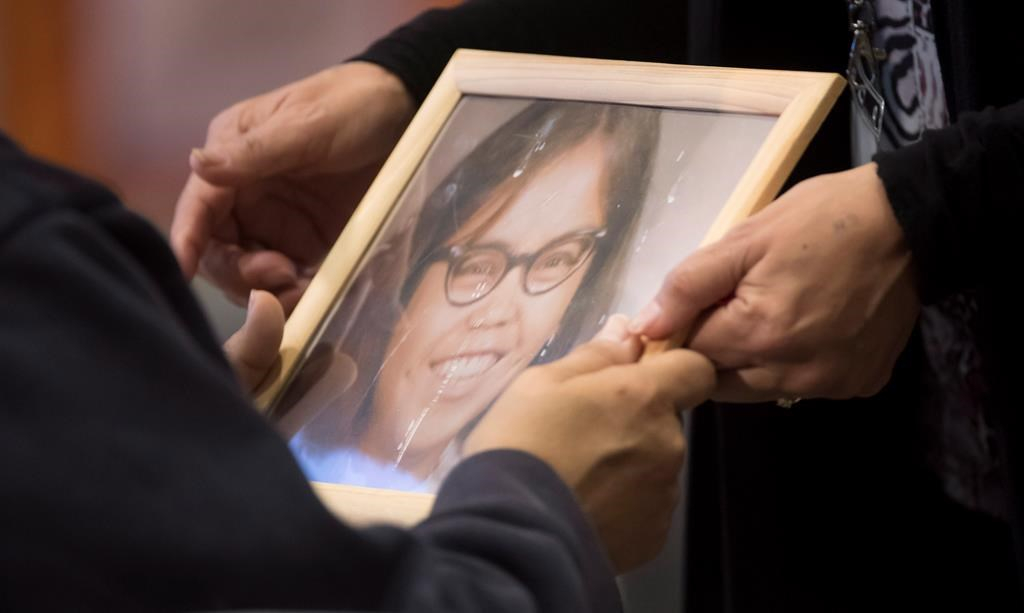 Trudy Smith shows a picture of her murdered sister Pauline Johnson during the National Inquiry of Missing and Murdered Indigenous Women and Girls in Richmond, B.C., on Friday, April, 6, 2018. Photo by The Canadian Press/Jonathan Hayward
Previous story
Next story

The head of the National Inquiry into Missing and Murdered Indigenous Women and Girls says that without an extension, it will feel as though work remains undone.

Marion Buller told The Canadian Press that the inquiry can produce a report and recommendations based on its investigation thus far, but "that would just scratch the surface."

"It isn't just more people, it's also quality and depth of analysis," she said in an interview.

The inquiry was established by the federal government in late 2015 to investigate the disproportionately high number of missing and murdered Indigenous women and girls in Canada, and to give family members a chance to have their stories heard.

Commissioners asked the federal government last month for a two-year extension, but Buller said it remains unclear if the request will be granted.

The inquiry's final public hearings are set to end in Richmond, B.C., this weekend and nearly 100 people have signed up to testify. Their stories will add to the more than 760 testimonies already gathered at public and private hearings, along with individual submissions from across the country.

Buller said momentum has been building with every event across Canada, and more people have come forward wanting to share their stories.

The growing numbers are a sign of the importance of the issue and that people are trusting the process, she added

But the inquiry has not been without controversy, including the departures of key personnel and delays.

Buller said having only nine months to create a framework and launch a nationwide inquiry without glitches was "unrealistic," but she remains proud of the work that staff have achieved.

An extension would allow the inquiry to revisit communities in the North, Quebec, northern Ontario and other areas, she said.

The inquiry is set to hold hearings with government institutions, including police, and experts in the coming months, which Buller said could be conducted in greater depth if they had more time.

With the existing deadline set for the end of this year, Buller said producing a final report "means I have to compromise standards that I have worked all my life to maintain."

Despite past inquiries and the work achieved by the Truth and Reconciliation Commission, many people remain unaware of the injustices experienced by Indigenous people, she said, add that truths being exposed by the process are "critical" if the country is going to move toward greater equality.