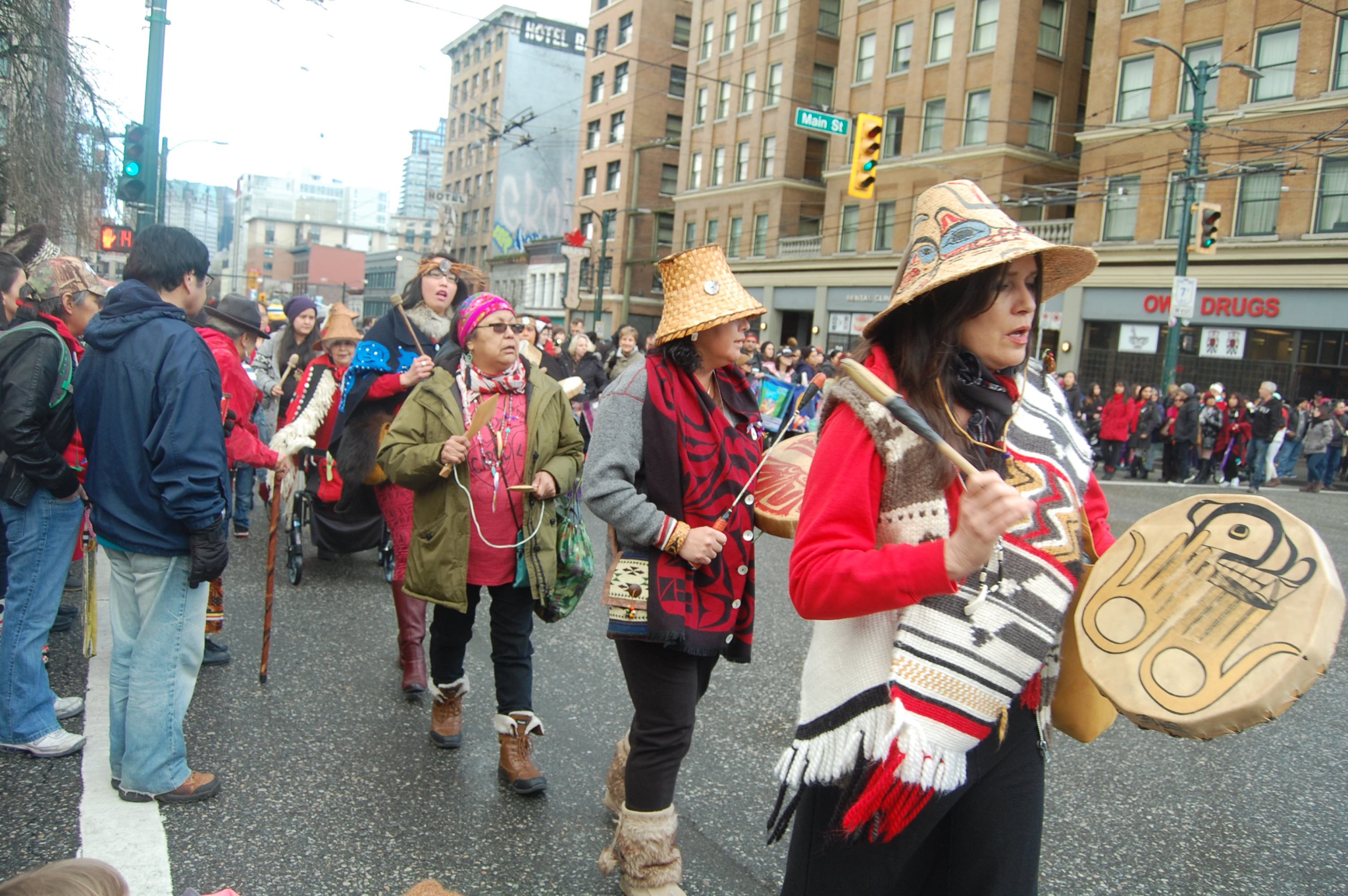 Women march in remembrance of missing and murdered women during the Women's Memorial March in Vancouver on February 14, 2018. Photo by Edward Ngai
Previous story
Next story

Myrna Cranmer was holding a flyer, filled from top to bottom with names in small font. They were the names of women who were no longer alive.

Cranmer is one of the key organizers of an annual march in memory of thousands of women, mostly Indigenous, who have been murdered or gone missing without justice in Canada.

This year marks the 27th annual march and it drew hundreds of people in Vancouver's Downtown Eastside on Wednesday.

Cranmer and three other Indigenous women told reporters why they march every year in February. By the end of the day, she was given more names of women to add to the list.

Cranmer noted how the issue is among 94 calls to action in the federal Truth and Reconciliation report from 2015.

Carol Martin said child welfare services once tried to apprehend her children. Her fellow presenter, Robin Bankz, is currently fighting for custody of her children in care in Canadian courts. She has had her right to visit her children taken away, after she continued filing reports that her daughters were being abused in care, she said.

"Child apprehension is just one small item in what Indigenous women down here face," Martin said. "I don't have any faith in the Canadian system. Everything is based on the land. If you target the women, remove our children, you dismantle families and dispossess us from the land."

Martin said the march started small, grassroots, but has grown much larger over the years. The first memorial march was held in 1991, when a woman was found killed on Powell street. A small community of women took to the streets and reported being harassed by onlookers and having things thrown at them.

Undeterred, the women kept marching, organizing and calling on other Indigenous people and allies to join them on February 14, to show solidarity for Indigenous women from coast to coast.

Indigenous women in Canada are more likely to be victims of violence. The RCMP estimates that 1,017 Indigenous women were killed between 1980 and 2012, while advocates say that the actual number is four times higher.

Under the residential school system from 1831-1996, about one third of all Indigenous children in Canada were removed from their homes, barred from practicing their cultures, speaking their languages and seeing their families. Most were physically, mentally, emotionally and sexually abused and at least 6,000 Indigenous youth died, according to the Commission.

“We have to unlearn a lot of what has been taught to us, ingrained in us: the internalized racism, the self-hating, the self-sabotaging," Martin said. “It's a reflection of the Canadian residential school system and the churches. We have to start talking about what happened.”

After the press conference, the four women joined the march.

Women of the Downtown Eastside, many wearing bright coloured vests, held hands and made space for Indigenous women, elders and their families. The march commenced as families who had lost loved ones stepped out of their prayer ceremony onto the street. They walked down an aisle formed by bodies of allies, some with their fists in the air, others drumming, more looking on in support.

As the crowd made its way downtown, they stopped at sites where women had been found dead, killed, overdosed or died. Led by two young girls dropping roses on the concrete and a small army of elders, backed by drummers, the crowd stopped at each site, to honour the departed.

Family members hugged and cried, as supporters stood back, sang the Women's Warrior Song, gifted by the Lil'wat Nation, to be sung in honour of Indigenous women. Every now and then eagles circled the crowd and people stopped to point, breaking out in a cheer, beating their drums, some saying the spirits of the sisters were there, present and aware.

The crown circled back around to the Carnegie Center, where more songs from different Nations were sung. Martin took the mic again.

"Look around you, look at all of the Indigenous women here today," she said, as the sun shone down on the crowd. "Let go of whatever you're holding in your heart and find love. Love your sisters. Love yourselves. We have to do better."