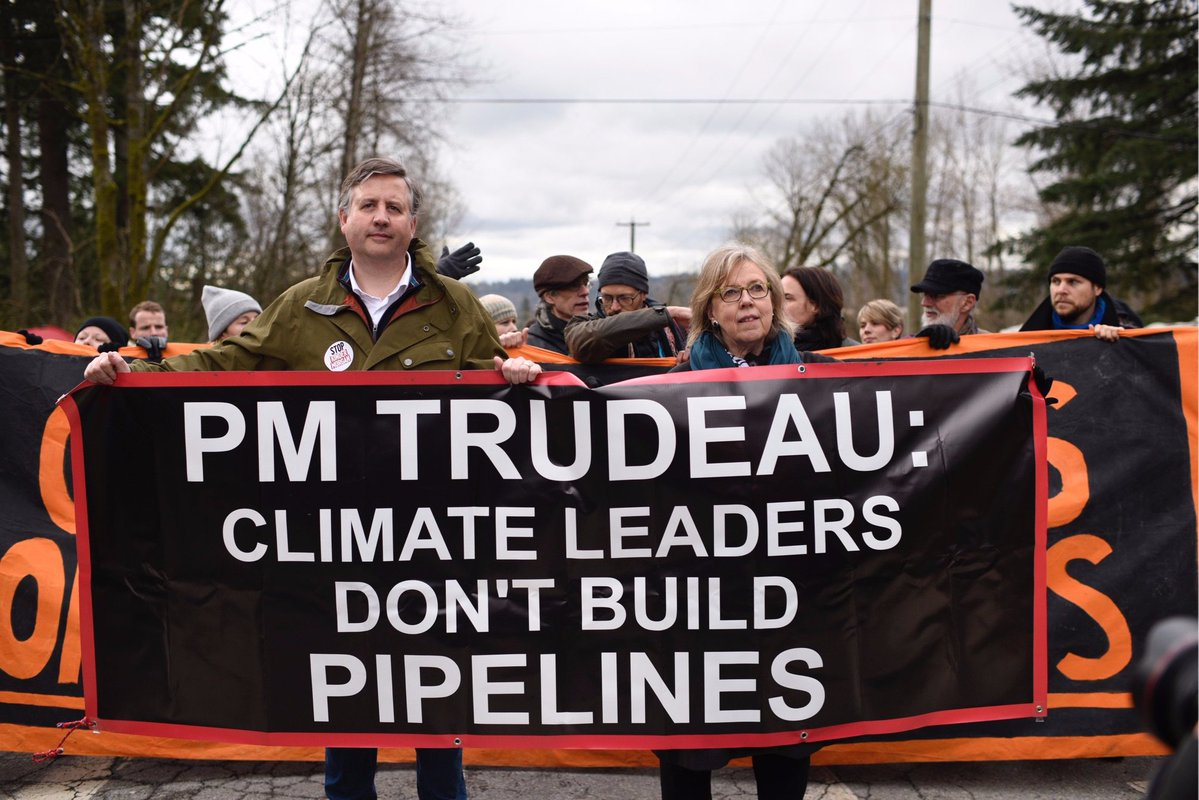 Green Party Leader Elizabeth May and NDP MP Kennedy Stewart march against Kinder Morgan's Trans Mountain pipeline on March 23, 2018 prior to violating a court injunction and getting arrested by the RCMP. Photo by Dylan S. Waisman
Previous story
Next story

A B.C. Supreme Court judge says the Crown should consider laying criminal contempt of court charges against Green party Leader Elizabeth May and dozens of other demonstrators alleged to have violated a pipeline court injunction.

May, New Democrat MP Kennedy Stewart, and others arrested last month are currently charged with civil contempt of court over allegations that they protested within five metres of two Trans Mountain sites in Burnaby, B.C.

But Justice Kenneth Affleck said the case should not be left to Trans Mountain to pursue as a private litigant and the matter should be taken over by B.C.'s attorney general.

"There is no doubt in my mind that the conduct that is alleged here amounts to criminal contempt of court," he said Monday.

"They are matters of public importance, they ought not to be left in the hands of a private litigant."

May was arrested with several others on March 23 when she joined protesters to rally against the expansion of the pipeline.

The B.C. Prosecution Service's civil disobedience policy manual says whether contempt is a civil or criminal matter is determined by "the character and nature of the conduct."

"A criminal contempt often involves a mass disobedience of a court order which tends to bring the administration of justice into disrepute or scorn," it says.

Trevor Shaw, a lawyer for the B.C. Prosecution Service, told the judge it would carefully consider a referral of the case from the court and report back "on what we see as the next steps that are viable and appropriate."

Maureen Killoran, counsel for Trans Mountain, said it's the responsibility of the court, not the company, to move forward on prosecuting the 150 people arrested at the site since the injunction was granted.

"The injunction order from the perspective of Trans Mountain is meaningless. It is a circus on site, and the court must take steps to protect the rule of law," she said.

Affleck said the trials, which should be expedited, aren't determining the merit of the pipeline expansion project that faces fierce opposition in B.C.

"This trial is not about the whether the work being done by Trans Mountain or Kinder Morgan is lawful or environmentally wise, none of that," he said. "The only issue is, has there been public defiance of the order?"

May's lawyer, Andi MacKay, said the court's direction to have the charges proceed as criminal rather than civil were clear, and while defendants intend to co-operate, they need more time.

She said only 15 of the 25 people in court on Monday had actually been served, and many people still needed time to find a lawyer.

"Individuals who are alleged to be in contempt of the court order are entitled to the time to retain counsel, to instruct counsel, to consider their options, to receive disclosure and to have proper notice," MacKay said in court.

The judge released the group on a promise to appear in court next week.

Yes these protesters are in

Yes these protesters are in contempt of court, because the position of the court is contemptuous of democratic principles and the rule of law.

"I submit that an individual who breaks a law that conscience tells him is unjust, and who willingly accepts the penalty of imprisonment in order to arouse the conscience of the community over its injustice, is in reality expressing the highest respect for law." - Dr. Martin Luther King, Jr.

nice to see a BC Supreme

nice to see a BC Supreme Court judge getting in to the middle of a pipeline dispute. Under what auspices is this being done? On whose authority? Judges rule from the bench. Has he already judged and found protesters guilty? I think he has overstepped his authority on this one...unless of course, judges can be bought by corporatations? Why would he comment on something that currently is not in his jurisdiction? I think he needs to explain himself fully, before a judicial council. Trying to direct the Attorney General to proceed with charges against protesters sounds like interfering with the AG's department. In civilized societies this wouldn't happen. Guess we can throw that idea out of the window.

It's hard to see how the

It's hard to see how the actions on Burnaby Mountain meet the criteria for criminal contempt: "a failure for an effective civil enforcement, ... particularly egregious conduct, repeat offenders or sentences where there have been violence or damaged property," I urge readers to contact David Eby, BC's Attorney General, and call on him to at the very least have these charges remain at the level of civil contempt, if not dismiss them altogether.

There is something amiss with this process. It would appear that the first injunction still applies to the Kask Bros lot. Perhaps, by implication, it does not in which case the notices should have been removed.