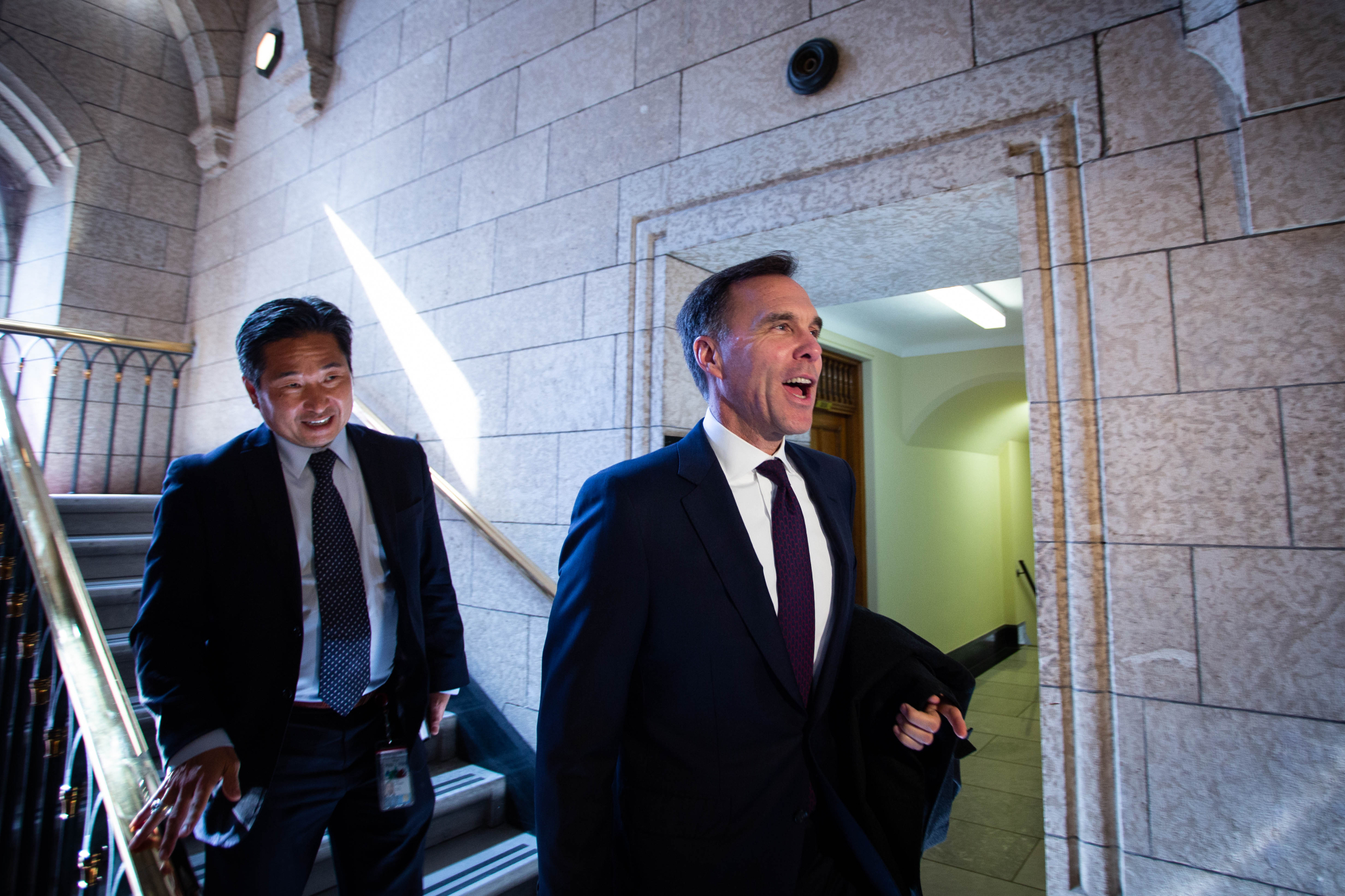 Finance Minister Bill Morneau and his chief of staff, Ben Chin, head toward an emergency federal cabinet meeting in Ottawa on April 10, 2018. Photo by Alex Tétreault
Previous story
Next story

Federal Finance Minister Bill Morneau doesn't want to say if the federal government would consider withholding transfer payments to the B.C. government over its opposition to a Texas-based company's pipeline project.

"I'm not going to publicly negotiate with any one of the parties," Morneau said after making a student work placement announcement at Toronto's Ryerson University, The Canadian Press reported.

The debate over the Kinder Morgan project took a dramatic turn on Sunday after the company threatened to cancel the project due to uncertainty about legal and procedural challenges from Premier John Horgan's government in B.C. The company said it was giving all stakeholders until May 31 to resolve their disputes, before deciding whether to proceed.

While Alberta has announced plans to adopt legislation that would punish its western neighbour's economy in retaliation for causing delays, B.C. Environment Minister George Heyman told National Observer in comments published on Tuesday that threats and coercion wouldn't resolve the dispute.

“I’m frankly very disappointed at the noise that we’ve been hearing around retaliatory action," Heyman said in an interview. "If they have a problem with what we’re doing, do what we do. Go to court to settle the dispute.”

Trudeau's ministers say that all options are on the table

Morneau and other federal ministers have said that all options are on the table to resolve a dispute that threatens to derail the project, Kinder Morgan's Trans Mountain expansion, which would triple the capacity of the Texas company's existing pipeline, allowing it to ship up to 890,000 barrels of oil per day from Alberta to a terminal in the metro Vancouver suburb of Burnaby.

The Trudeau government in Ottawa and NDP Premier Rachel Notley's government in Alberta both support the project saying that it will spur growth in the oilsands sector, which is home to the world's third largest reserves of oil after Saudi Arabia and Venezuela.

Opponents, including the B.C. NDP government, say that the project is too risky and would drive Canada's climate change goals out of reach by encouraging expansion in the oilsands, the country's fastest growing source of greenhouse gas pollution.

But both the Trudeau and Notley governments have said the pipeline would be part of a larger climate change plan that would cap oilsands emissions while allowing the sector to reach new markets in Asia. This would improve the oil industry's capacity to compete with producers from other countries, they have both said.

Morneau, who met with Notley in Toronto, said that Ottawa is considering a potential financial stake in the project, among its options, CP reported.

In Ottawa, federal NDP Leader Jagmeet Singh proposed that Ottawa join with B.C. in asking the Supreme Court of Canada to fast-track a hearing over the province's legal challenges against the project, to save time from hearings in a lower court that could later be appealed, dragging the process on for years.

"We also urge them to invite First Nations and the province of Alberta to participate equally in this case," Singh told reporters at a news conference in Ottawa. "Let’s use the resources we have, let’s use the institutions that we trust, to move forward together."

Singh said his team has been in contact with Notley's and Horgan's offices over the dispute, but that he hadn't spoken to the Alberta premier personally.

Singh has publicly stated his opposition to the pipeline, accusing Trudeau's Liberals of messing up the file and betraying B.C. by retreating on an election campaign promise to lead a new independent federal review and assessment of the project.

He also criticized Trudeau for suggesting in a message posted on Twitter that project opponents were breaking the law.

"Instead of threats of force, or accusing B.C. of ignoring the rule of law – which is completely untrue – let’s look to how we can partner with each other… even if we disagree," Singh said.

"There is a jurisdictional dispute in communities such as Burnaby and in various First Nations communities in British Columbia. This dispute must be resolved."

Premier Notley later told reporters that Ottawa has promised specific action to try to break the impasse over the Trans Mountain pipeline.

Speaking to the media during a conference call, she said that she left her meeting with Morneau feeling "a little bit more convinced" that the federal government would take specific action soon.

She declined to outline what those specific actions might be, saying that is something for Morneau to make public.

Notley said the line, from Edmonton to Burnaby, is critical to getting more oil to the coast and fetching better prices to aid the Canadian economy.

She is introducing a bill next week to give her the power to turn down the oil taps to B.C., and says that will involve imposing new conditions on export licences.

"It would ... allow us to direct the export of the product in a way that allows us to get the best price for the product and meets other generalized objectives," said Notley.

"That could include a number of things, both restricting what goes in certain directions as well as suggesting certain mechanisms for it to be transported."

Morneau said he wouldn't be able to provide details on specific actions he is mulling over until discussions around the project are more advanced.

He also declined to provide details of any recent discussions between Kinder Morgan and the federal government.

Can't read much more of this

Can't read much more of this tempest in a tea cup....but will say this.
My country is not up on the auction block....or the poker table....to be bullied, forfeited, or gambled away in the service of an Texas company cobbled together after the Enron debaucle. I suspect most Canadians feel as I do.
No war games Morneau. Notley, give your head a shake....your base doesn't play dirty politics. If the people of Vancouver, Burnaby and environs say no to a project, listening to them is in the best traditions of Canadian democracy. Declaring their concerns criminal, or playing Iraq type sanction games should be off the table.
Find a way to compromise....to do business in the Canadian way, or be prepared to be held accountable. This country is not an arena for civil war, because Energy interests trump the rule of law.....if and when the rule of law doesn't work for them.

Cut off transfer payments for

Cut off transfer payments for, like, healthcare? Then what -- squads of Liberals descend on BC to unplug people's ventilators if we don't let the pipeline go through?