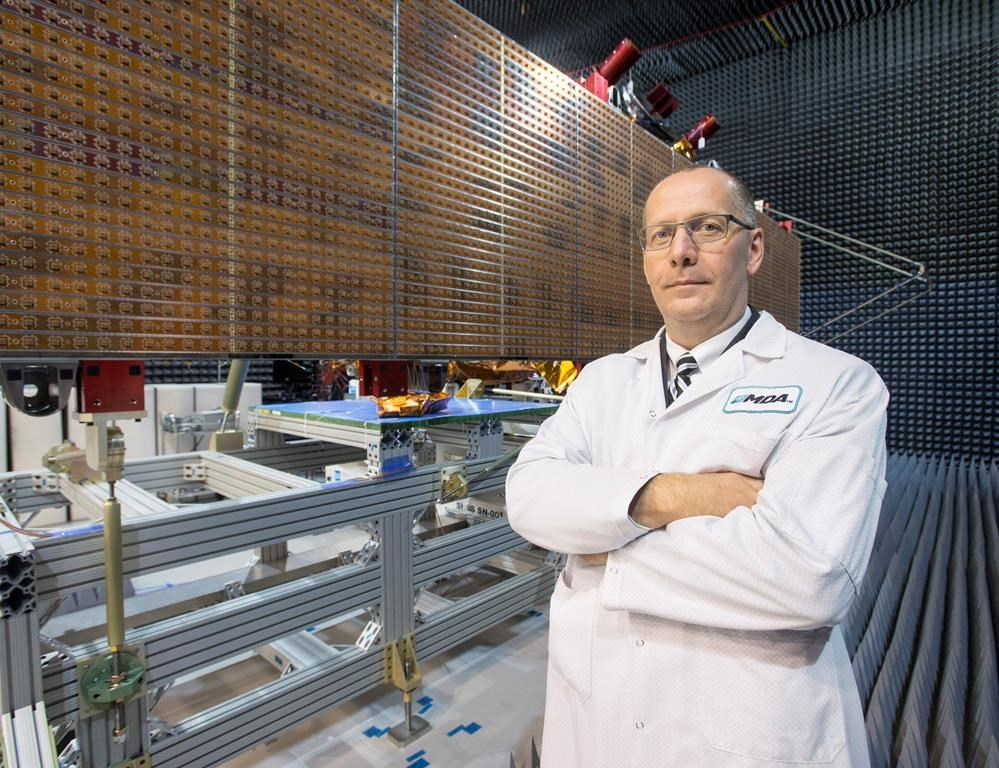 MDA's President Mike Greenley is seen in front of one of three RADARSAT Constellation Mission spacecrafts being built for the CSA at the company's facility in Sainte-Anne-de-Bellevue, Quebec on Jan. 30, 2018. File photo by The Canadian Press/Ryan Remiorz
Previous story
Next story

The president of Canadarm-builder MDA says setting up the company's parent firm in the United States won't have any impact on jobs in Canada.

In October 2017, MacDonald Dettwiler and Associates, based in Richmond, B.C., became Maxar Technologies Ltd. after it acquired DigitalGlobe, an American satellite imaging company.

Maxar's headquarters were in San Francisco before recently moving to Westminster, Colo.

At the time, MacDonald, Dettwiler and Associates was also rebranded simply as "MDA".

The move came almost 10 years after the Conservative government moved in 2008 to halt the sale of MacDonald, Dettwiler and Associates' space technology division to Alliant Techsystems, an American company.

Then-industry minister Jim Prentice said he was not satisfied the sale would be a net benefit for Canada.

Mike Greenley, the head of the new MDA, says the company has been "very transparent and talked openly" about shifting the head office south of the border.

He oversees all of the MDA lines of business and its 1,900 employees in Canada.

"Nothing has moved and nothing is moving," Greenley told The Canadian Press in a recent interview.

"My job is to run it and grow it bigger in Canada, for Canada, and exporting from Canada to the rest of the world.

"You have to export and access foreign markets in order to grow to scale," because "Canada's economy is only so big."

MDA's Canadian operations include its surveillance and intelligence facilities in Richmond, Ottawa and Halifax; its robotics and automation plants in Brampton, Ont; and its satellite subsystems in Montreal.

In an email to The Canadian Press, Innovation, Science and Economic Development Department spokesman Hans Parmar said, "MDA has indicated for several years its desire to grow in the U.S. market, which is the largest market."

But NDP science critic Brian Masse is worried about what he calls "the hollowing-out of decision-making" in Canada.

"This has happened to some degree in the auto industry as we don't even have Canadian presidents in some sectors anymore," the MP for the Ontario riding of Windsor West said in an interview.

"The same promises are made by Honeywell when it bought out COM-DEV, (but) 35 per cent of their employees at their Cambridge plant lost their jobs," he noted.

"In the fall of 2017, they announced they were laying off COM DEV employees due to a downturn in the space and satellite industry."

Jeneroux does not appear to be comforted that Greenley has said no jobs would leave Canada.

"The Liberals seem to take this at face value, but just you look at what's happened in the past and we've been losing jobs to the States," he said.

Greenley also said in the interview that finding growth for MDA in Canada would be helped by a new space strategy.

"For that to happen something would have to move . . . in terms of folks trying to get an updated, documented, discussable space strategy," he said.

But the email from the federal minister's office gave no indication as to when the Canadian space sector could expect to see a new plan.

"Space is a critical part of Canada's infrastructure and a strategic sector of our economy, so it is important that we take the time necessary to get it right," Parmar wrote, adding that "more work needs to be done."

Jeneroux says the Canadian space industry is frustrated waiting for Bains to unveil a national strategy.

"They (the Liberals) make these promises, but then they end up disappointing an entire industry."

Editor's note: This story was corrected at 5:06 p.m. EST on April 23, 2018; a previous version said Hans Parmar was a spokesman for the minister.