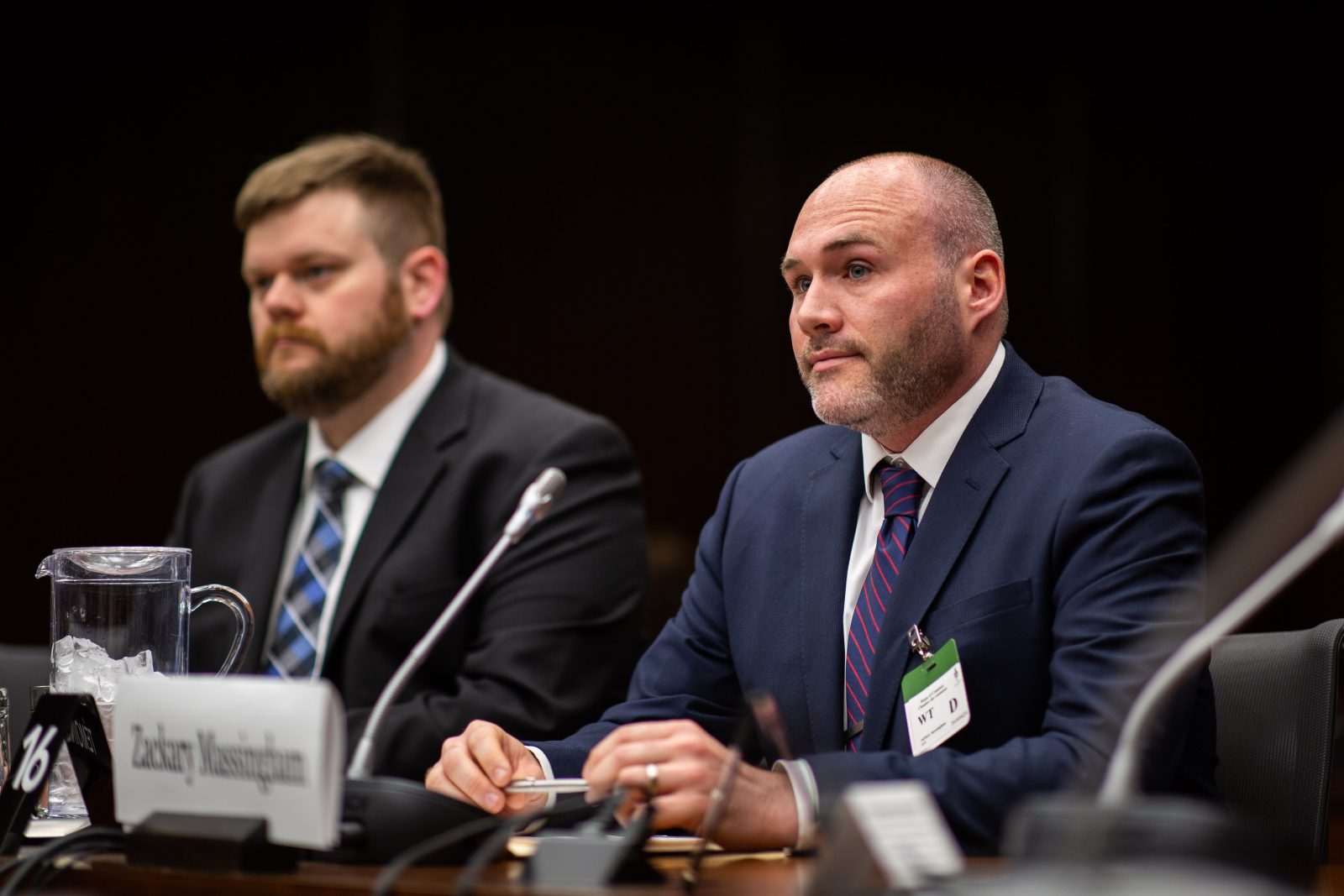 An overseas text message brought some unexpected drama to parliamentary hearings in Ottawa on Tuesday, leaving the embattled co-founders of a Canadian firm tied to the Facebook data scandal fending off questions about whether they were telling falsehoods.

Zackary Massingham and Jeff Silvester, of Victoria, B.C.-based political data firm AggregateIQ, appeared before the House of Commons ethics committee April 24 to defend their company’s work for campaigns to leave the European Union, and deny any association with Cambridge Analytica, the firm at the centre of controversy over the misuse of personal information for political ends, or its parent company SCL.

Cambridge Analytica’s website at one point listed Massingham’s phone number and referred to “SCL Canada," according to a report in the UK's Guardian newspaper. Christopher Wylie, a 28-year-old data scientist from British Columbia, has said he helped found AggregateIQ while he worked for SCL, and that it was “set up as a Canadian entity for people who wanted to work on SCL projects.” Another report from CBC News, citing a whistleblower and documents, said AggregateIQ was used to sidestep Brexit campaign spending limits.

Facebook, which has estimated that as many as 87 million users worldwide were potentially affected by the misuse of data, including 622,161 Canadians, suspended AggregateIQ from its platform on April 6. It has made a number of changes, including rolling out new policies limiting political ads to only those advertisers who can confirm their identity and location.

In Ottawa on Tuesday, Massingham, the chief executive officer, and Silvester, the chief operating officer, faced a grilling by some committee members who grew increasingly incredulous over their answers, especially in connection with an investigation by the UK’s information commissioner into whether the firm broke privacy laws. The commissioner, Elizabeth Denham, has told the Guardian that AggregateIQ has “not been especially co-operative.”

Liberal MP and committee vice-chair Nathaniel Erskine-Smith pressed the two executives to explain the context surrounding their correspondence with Denham. Silvester said the commissioner had sent two letters, and the company provided answers to all of Denham’s questions, as well as offered to provide clarification.

Then Erskine-Smith stunned the room by saying that Damian Collins, the chair of the UK’s Digital, Culture, Media and Sport Committee — which has been investigating Brexit campaign spending — had just texted him.

Collins, he relayed, had just spoke to Denham about Silvester’s comments. The UK commissioner had rejected Silvester's claims that he was cooperating with the British investigation, Erskine-Smith explained. Instead, the commissioner was reporting that the Canadian businessmen had “refused to answer her specific questions.”

'Who's not telling us the truth?'

What followed was one of many charged squabbles between the company executives and committee members over who was lying.

“This is real-time, it just happened based on what you said. Who’s not telling us the truth, you, or her?” Liberal MP Frank Baylis demanded to know.

“If she has additional questions, I’m hopeful that she’ll follow up with that,” Silvester responded.

“I’ve been 100 per cent honest in all of my answers,” said Silvester.

Massingham and Silvester acknowledged that they received over a million dollars from one of the Brexit campaigns, Vote Leave, to do work on behalf of other campaigns advocating to leave the European Union.

All this money is the subject of an investigation over campaign finance laws in the UK. A legal opinion by the law firm Matrix Chambers has said there was a “prima facie case that...electoral offences were committed” by Vote Leave — suggesting the campaign donated to other campaigns and channelled the money through AggregateIQ, violating election rules.

Erskine-Smith said the legal review showed that AggregateIQ provided an order for services which corresponded to the same amount transferred by Vote Leave. “(BeLeave) directed you to do an ad spend, and somehow gets the exact same amount from Vote Leave immediately thereafter?” he asked, astounded.

Massingham said he understood that such behaviour could circumvent campaign finance law by going over spending limits, but he was unaware of any correspondence during the time the 625,000 pounds was transferred from Vote Leave.

The executives said no one introduced the company to any campaign on the Remain side. And they never asked where the different pro-Brexit groups might have heard of them.

Silvester said BeLeave contacted them through email, but that he “might have reached out” to the others to suggest they work with AggregateIQ. He said the information to target voters was provided separately by each campaign.

Veterans for Britain, for example, told AggregateIQ it had received a “donation” and that “they’d like to put that money toward online advertising," said Massingham. BeLeave, meanwhile, wanted to target "a more youthful audience with a positive vision of what a future outside of the EU might look like," he said.

Erskine-Smith, however, asked several times about different components that he said suggested co-ordination.

He wondered, for example, how the campaigns could be unrelated if there was a shared online Google Drive owned by the chief operating officer of Vote Leave holding BeLeave-related documents, which Massingham had access to on behalf of AggregateIQ.

“I can’t speak to that,” said Massingham.

“That evidence seems to suggest there would be co-ordination, is that fair to say?” Erskine-Smith pressed.

“I don’t believe so, no,” said Massingham.

Massingham also said he wasn't sure why his phone number appeared on Cambridge Analytica’s website until March 2017. He it was his personal phone, and that it never rang.

“I guess what I’m wondering here, is that everyone else must be involved in an amazing conspiracy against you, Mr. Massingham,” said NDP MP and committee co-chair Charlie Angus.

“They’re accusing you of being a part of Cambridge Analytica, which you said you didn’t know existed...Mr. Wylie said he helped set you up — which you said isn’t true. SCL Canada lists you as their head of Canada services, which you say is not true. You had a phone that went directly to you — why is everybody against you, Mr. Massingham?”

“I’m not sure,” he replied. “I can only speak to the work at we do at AggregateIQ, and what Jeff and I have done together.”

Angus continued to press the witnesses for more details.

“The idea that this is all a series of isolated companies that had nothing to do with each other — you didn’t know each other, you just happened to be working on all the same projects, and you are listed as SCL Canada — why don’t you just tell us what you’re covering up for SCL Canada, Mr. Massingham? Why are you taking the fall for these guys?” Angus said.

“We’re not taking the fall for anyone—” Silvester cut in. But Angus directed his question back at Massingham.

“Mr. Angus, I can’t speak to what marketing materials they’ve put out or what they do with my contact information. But I can tell you, we are not a part of SCL or Cambridge Analytica,” said Massingham.

At another point, Silvester denied Wylie’s statement that the arrangement between Vote Leave, BeLeave and AggregateIQ was “totally illegal.”

“I don’t think I ever said to Mr. Wylie that what was happening was totally illegal,” said Silvester.

Angus interjected. “We’re on the record here!” he said.

“Mr. Wylie’s going to come (to the committee) and he’s going to say that you did say it. He’s already said it,” Angus responded.