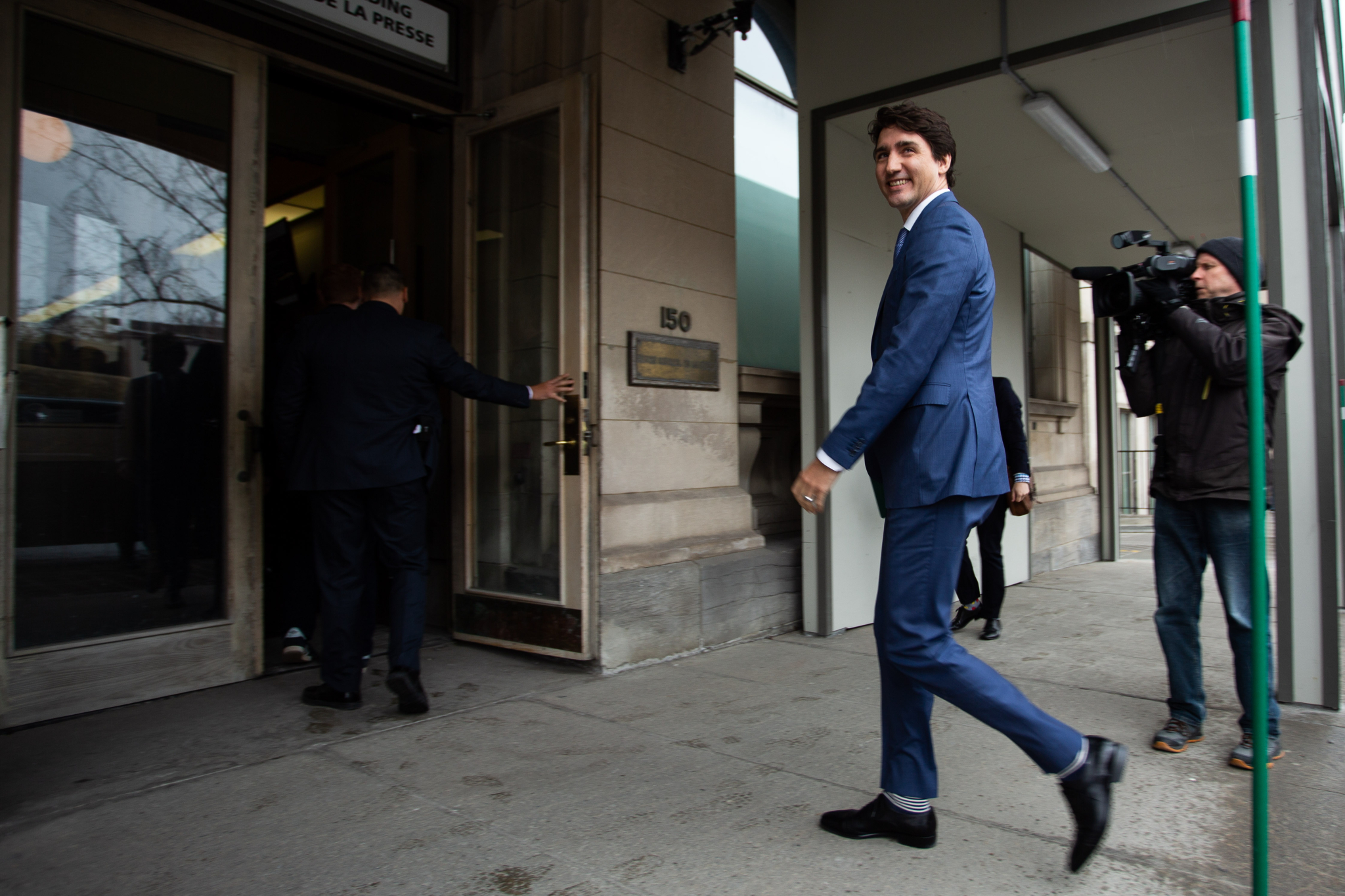 Prime Minister Justin Trudeau sidestepped questions raised in the House of Commons on Tuesday about whether he was aware of secret instructions delivered in 2016 to public servants working on the federal review of the Trans Mountain expansion project.

The instructions were provided to staffers from five different federal departments that were reviewing evidence and factors related to the subsequent approval. But these instructions contrasted with the message that the government was delivering at that time to members of the public and to the First Nations it was supposedly consulting about the project.

"We now have a media report claiming that the process to approve Kinder Morgan was rigged, following lobbying from a Texas oil company," Caron said in the Commons. "The government rushed the review process and instructed staff to find a 'legally-sound basis to say yes to the Trans Mountain pipeline.' Was the prime minister aware that members of his government pressured officials to rush the review and produce a positive result for Kinder Morgan?"

The federal government has a legal duty to consult First Nations about decisions that may affect their rights, their land and their way of life under Section 35 of the Canadian Constitution. As a result, the courts could overturn Trudeau's approval of the Trans Mountain project if they determine federal consultations with First Nations weren't done in a meaningful way.

Trudeau responded by accusing New Democrats and Conservatives of trying to force the government to choose between either the environment or the economy.

"We got elected on a commitment to both grow the economy and protect the environment at the same time, because, quite frankly, 10 years of the previous government not protecting the environment actually left us with the lowest economic growth rate since the depths of the Great Depression," Trudeau said.

"We are moving forward on both building pipelines and bringing in protections for the environment at the same time. It is what Canadians expect of our government, and it is what we are delivering."

Caron persisted, suggesting that Trudeau hadn't understood the question. The NDP MP also alluded to other details uncovered by National Observer which revealed that high-ranking federal officials sped up the timeline for completing the Kinder Morgan review, following a phone call from Ian Anderson, president of the company's Canadian affiliate.

"It's as if the CEO of Kinder Morgan has a direct line to the minister of natural resources," Caron said. "How can the prime minister continue to expect people to believe there was a balanced process, when it becomes clear that the dice were loaded from the start?"

Trudeau's government and Alberta Premier Rachel Notley's government have both said they've engaged in financial discussions with Kinder Morgan to find a way to ensure the project is built. The launched these negotiations after the company announced on April 8 that it was suspending non-essential spending on the project and contemplating the possibility of abandoning it due to uncertainty caused by opposition in B.C.

Trudeau approved the pipeline in November 2016, along with 157 binding conditions, which the company has not yet met. But his government has said it's key to creating jobs and economic growth since it could allow Canadian oil producers to access new markets on the Pacific.

If built, the Trans Mountain pipeline expansion would triple the company's shipping capacity up to 890,000 barrels of petroleum products including bitumen, the tar-like heavy oil produced in Alberta's oilsands, per day. The oilsands hold the world's third largest reserve of crude oil after Saudi Arabia and Venezuela, but it is costly and energy-intensive to extract, leaving a significant environmental footprint that makes oilsands operators Canada's fastest growing source of greenhouse gas emissions.

Trudeau told National Observer in an interview in February that his decision to approve Trans Mountain was part of a "trade-off" to secure Alberta's support for a national climate change plan that would place a limit on pollution levels from the oilsands.

"What's interesting with the NDP, is that New Democratic Party members and their leaders don't agree about this project," Trudeau said in the Commons, responding to Caron. "On one hand, their leader says he could accept this project, while on the other hand, the MP for Rosemont—La Petite-Patrie (Alexandre Boulerice) says that his party would never accept it. We took a decision that was in the national interest that included a world-class plan to protect the oceans, since we know that the environment and the economy go together. While the NDP is searching for a position, we're acting in Canada's national interest."

NDP Leader Jagmeet Singh told National Observer in an interview on Feb. 18 that Canada would only be able to move forward with the Trans Mountain project if "it’s subject to an environmental assessment that was modernized, that’s science-based, that had all the concerns around the environment addressed."

Previously, the prime minister had told reporters following a special meeting with Notley and B.C. Premier John Horgan on April 15, that his government had tried to learn from the past mistakes made by former prime minister Stephen Harper.

"Lessons learned on consultations that did not go properly as court cases indicated were very important for us," Trudeau had said on April 15. "We know that engaging substantively and responsibly with indigenous peoples is an essential part of how we move forward as a country."

The Harper government's failure to adequately consult First Nations led a Federal Court of Appeal to quash the approval of another west coast pipeline, the Enbridge Northern Gateway project, in June 2016.

"That’s why we embarked upon the widest ever set of consultations with Indigenous peoples around this particular (Trans Mountain) project," Trudeau added. "And while we understand out of no community are we ever going to be able to get unanimity, meaningful consultation, a hearing of concerns, responding to those concerns and finding the right path forward in the national interest is something that the government will always have to do and we certainly did in this case."

'They should get with the program,' says Catherine McKenna

On the other side of the Commons, federal Conservatives said that Trudeau's government needed to do more to support jobs in the oil and gas industry, while criticizing plans to make polluters pay.

Conservative MP Shannon Stubbs noted in the Commons that Canada was stuck shipping 99 per cent of its oil exports to the U.S., just as the U.S. was projected to ramp up its own supply, filling 80 per cent of the growing global demand over the next five years. The Conservatives, along with oil industry lobbyists, have suggested the government is chasing away new investments by strengthening Canada's environmental laws.

"The Liberals are destroying Canada's competitiveness," said Stubbs, MP for the Alberta riding of Lakeland, in the Commons. "When will the Liberals stop helping the United States steal Canadian jobs?"

Natural Resources Minister Jim Carr responded by noting that the previous Harper government had failed to approve any pipelines that were built and able to ship oil to new export markets.

Environment and Climate Change Minister Catherine McKenna added that other government policies such as plans to put a price on carbon pollution opens up possibilities for new jobs in a cleaner economy.

Editor's note: This article was updated at 7 p.m. ET with an additional statements made by Prime Minister Justin Trudeau during a news conference on April 15, 2018.

The Cons should be proud of

The Cons should be proud of Trudeau's spinning and obfuscation.

Yep - Justin you do need to

Well near the end of this

Well near the end of this piece, it sounds as if McKenna thinks that's what investing in the KM is doing!!! Am I missing something here?

Frankly, Trudeau has always been a wee offensive when it comes to his climate and the economy schtick. Thinking that he could look pretty and talk a good line, while behind the scenes the usual strings were pulled, is fairly traditional Liberal strategy.

They're even getting ready to talk a good line on pharmacare, in order to hold power and keep at bay a government that actually might fund single payer drugs. We'd save billions if we did so...but if we keep thinking positive, falling for 'sunny ways' and believing we can have our environmental cake with the usual oily icing, we're done.

Pretending that our second attempt at a national oil policy would be to buy an interest in KM is more than pathetic, but it will keep Scheer and the oil cartels happy. Pretending that this is how you balance the economy and the environment is just dumb. Have none of these people read the climate science??

Get with the program McKenna? Indeed. But funding old technology pipelines, has nothing to do with building the new economy. Quite the reverse.

Trudeau is master of the

Trudeau is master of the fatuous argument and not understanding the question. Kinder Morgan has him in their hip pocket. It is absolutely disgusting he gets away with this crap... https://canadianviews-ymo.ca/trudeaus-indelible-tory-blue/