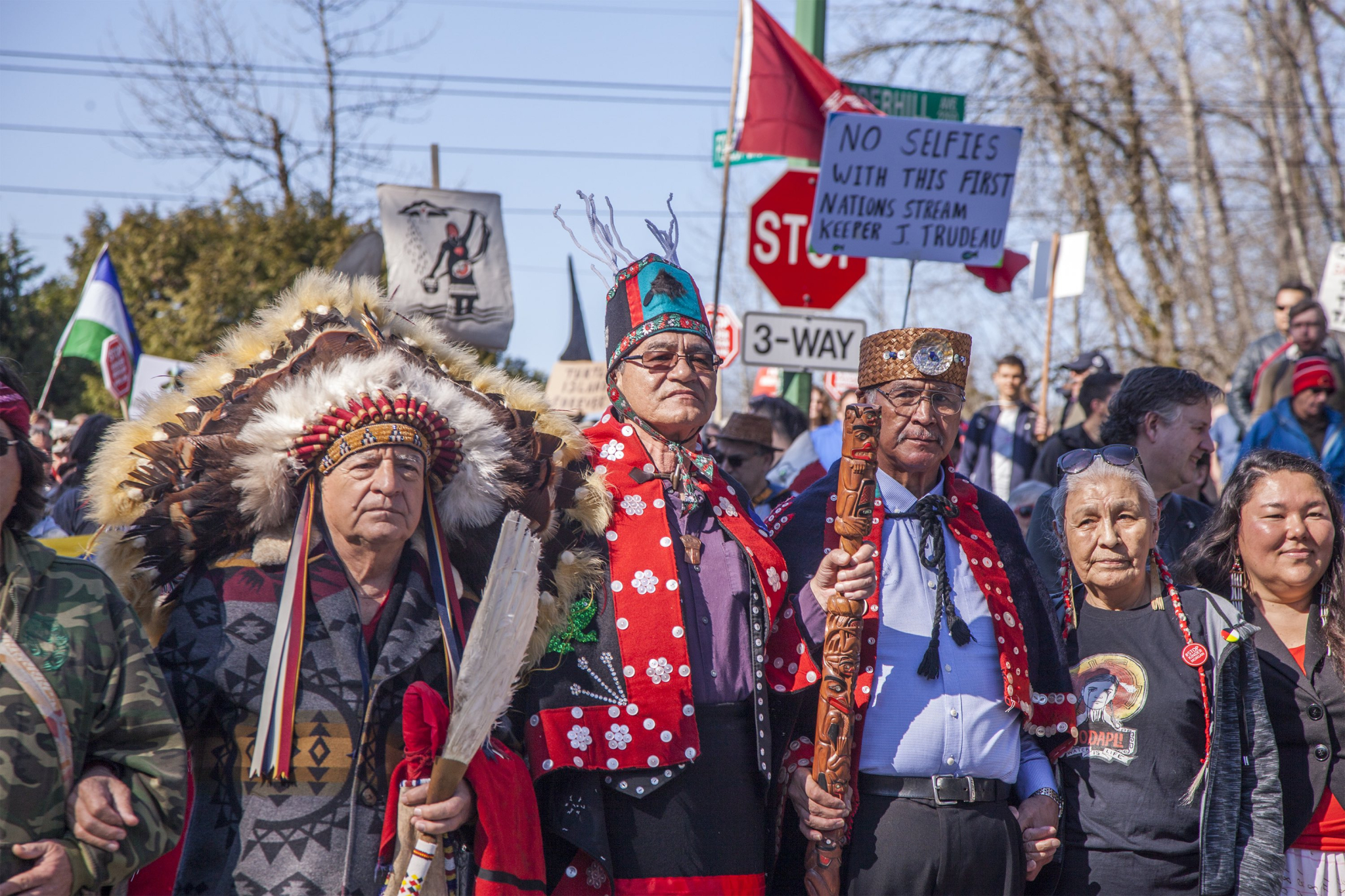 Senior public servants warned the Trudeau government in 2016 of concerns that its consultations with First Nations on the Trans Mountain expansion pipeline were “moving fast” — comparing the process to mistakes that led to the failure of another west coast pipeline, says a newly-released internal email.

A public servant who was leading Crown consultations with First Nations about the pipeline project sent the email in October 2016. It was delivered to a team of bureaucrats from five different federal departments and one government agency about four weeks before Prime Minister Justin Trudeau approved the Trans Mountain project, proposed by Texas-based multinational Kinder Morgan.

If built, the Trans Mountain expansion would triple the capacity of an existing pipeline network along a modified route, allowing oil companies to ship up to 890,000 barrels of bitumen, heavy oil from Alberta’s oilsands sector, to a marine terminal in the Metro Vancouver City of Burnaby.

Several First Nations are now challenging the Trudeau government’s approval of the Kinder Morgan project in court, arguing that the prime minister’s cabinet failed to fulfill its legal duty to consult affected First Nations about its decision.

The Trudeau government has argued that it led extensive consultations prior to approval, and in the end, determined that the pipeline is in the national interest because it promotes economic growth and helped persuade Alberta, home to the world's third largest reserves of oil after Saudi Arabia and Venezuela, to participate in a countrywide climate change strategy.

Over the past week, Trudeau and Alberta Premier Rachel Notley’s government — along with Conservative politicians, business leaders, bankers and the oilpatch — have blamed opposition in British Columbia for triggering Kinder Morgan’s threat to cancel the project. Trudeau has also summoned Notley and British Columbia Premier John Horgan to Ottawa for a special meeting on Sunday in an attempt to resolve the dispute.

But the newly-released email shows that bureaucrats believed the federal consultation process, led by the federal government's Major Projects Management Office, was failing, jeopardizing the pipeline long before the provincial fallout, and before Trudeau even announced his decision.

The Major Projects Management Office was a new federal organization, created by the former Harper government in 2007, to co-ordinate federal reviews of major projects such as pipelines. Its main mandate is to ensure a centralized, whole-of-government (WoG) approach on assessments. The government introduced this office to speed up federal reviews of major projects by bringing departments with different mandates onto the same page.

The email, dated Oct. 26, 2016 and released to National Observer through access-to-information legislation, notes that two senior public servants at that time, Associate Deputy Minister Erin O’Gorman from the Major Projects Management Office and Timothy Gardiner, a director from Natural Resources Canada, had both been briefed on the emerging problems.

The email was sent a few months after the Federal Court of Appeal quashed the former Harper government’s approval of Enbridge’s Northern Gateway pipeline from Alberta to Kitimat on the northwest coast of B.C., following a legal challenge spearheaded by several First Nations, including the Gitxaala Nation, the Gitga’at Nation and the Haisla Nation, along with other non-government organizations and the labour union, Unifor. The court ruling said that the First Nations weren't adequately consulted prior to Harper's decision.

“Erin has also heard via Tim from me the pressure we’re under and some concerns post-Gitxaala that the process towards decision is moving fast and that departments are still in active response and meeting mode (in particular MPMO in its role as coordinator of a WoG approach, and TC as the regulatory lead for marine safety),” wrote the senior public servant to colleagues from the other departments.

Rallying the team as the clock is ticking

The email was sent to convene all of the bureaucrats involved in the Trans Mountain decision from Natural Resources Canada, Environment and Climate Change Canada, Indigenous and Northern Affairs Canada, Health Canada, Transport Canada (referred to as TC in the email) and the Vancouver Fraser Port Authority to a special meeting to be held in Vancouver the following day.

The Crown consultations lead also wrote in the email that they could discuss how to accommodate First Nations at the meeting, along with other issues identified by their departments regarding permits for Kinder Morgan and conditions needed for any potential approval.

“I also think she (O'Gorman) just wants to rally the interdepartmental team a bit as we draw down the clock on the existing timeline for decisions,” the public servant continued in the email. “Other than that there is no fixed agenda, just an opportunity for dialogue.”

O'Gorman and Gardiner both moved onto other government jobs after the Trans Mountain project was approved, along with several other public servants who worked on the file. The departures have made it difficult for the Natural Resources Department's access to information division to locate and retrieve relevant documents that were requested about the file.

But other documents, released to National Observer in January, revealed that public servants had informed federal Natural Resources Minister Jim Carr that First Nations felt the consultations were "parternalistic," "inadequate," and "unrealistic."

The legal duty for the federal government to consult First Nations on decisions that could affect their rights is enshrined in Section 35 of Canada’s Constitution. It has been upheld in several court decisions, including the Enbridge decision from 2016, which slammed the former Harper government for ignoring concerns raised by First Nations regarding the Northern Gateway project.

The Enbridge decision found that the Harper government might have been able to resolve the issue, simply by extending consultations by about four months, before it made its decision.

“But in the face of the requests of affected First Nations for more time, there was silence,” said the court ruling on the Enbridge case, delivered in Ottawa on June 23, 2016. “As best as we can tell from the record, these requests were never conveyed to the Governor in Council, let alone considered.”

In an interview last week with National Observer at the opening of a movie about communities on the Trans Mountain expansion route, Directly Affected, Grand Chief Stewart Phillip from the Union of BC Indian Chiefs said that he believed the pipeline project was dead due to the absence of consent.

"You simply can't build a pipeline in the face of such opposition. Our movement is growing on a daily and a weekly basis," he said.

"There was a lot of hope an optimism with respect to the initial statements made by the prime minister of Canada, but his actions, in terms of approving the Kinder Morgan Trans Mountain pipeline, the approval of the Site C (hydroelectric) dam, and the (Pacific Northwest) Lelu Island LNG facility (later cancelled) were all a betrayal of the commitments made during the last federal election."

Grand Chief Stewart Phillip from the Union of BC Indian Chiefs and others speak to National Observer on the red carpet at a screening of the movie, Directly Affected, on April 10, 2018. National Observer Facebook video

Natural Resources Minister Jim Carr declined an interview request about the newly-released email through a spokesman. Instead, his office responded to questions by sending National Observer a statement that noted how the government had led extensive consultations on Trans Mountain, prior to approving the project. They included, for the first time, consultations held by a special government-appointed panel, which sought public input on the NEB's recommendation to approve the pipeline.

"Our job as the federal government is to make decisions on behalf of all Canadians and that is exactly what we did when we approved the Trans Mountain Expansion," Carr's office said in the statement. "We are aided in our decision making by the advice of a professional, independent civil service."

The statement added that the government reviewed the climate-warming impact of the project and how it would fit in with the Alberta government's climate change policies. Carr's office also defended the federal government's consultations with Indigenous communities and British Columbia, while noting it had introduced a new plan to protect Canada's oceans as part of its decision to approve the project.

"We approved the project following unprecedented consultations with Canadians. We completed the most exhaustive review in the history of pipelines in Canada," the statement said. "We remain committed to seeing this pipeline built as part of a sensible strategy to advance our environment and economic interests — diversifying our markets and creating thousands of good middle-class jobs, including in Indigenous communities."

What Canadians should find

What Canadians should find interesting....and perhaps even disturbing....is that consultations with Indigenous Nations never seem to resolve those Nations problems with pipelines going through their territories....or mega dams flooding their territories.

I think it says something important about Lip Service. Wnat what a colossal waste of time and money it is in the long run. As feminists raised the question regarding rape many years ago already...What is it about No that the Canadian government is failing to understand? And what is a consultation, if nothing you say changes the pre-ordained decision of the government?

Sounds like we're adding insult to injury....and hoping that will make our first people's feel included. Canadians should be embarrassed if this is all Reconciliation amounts to....another form of polite steamrolling?