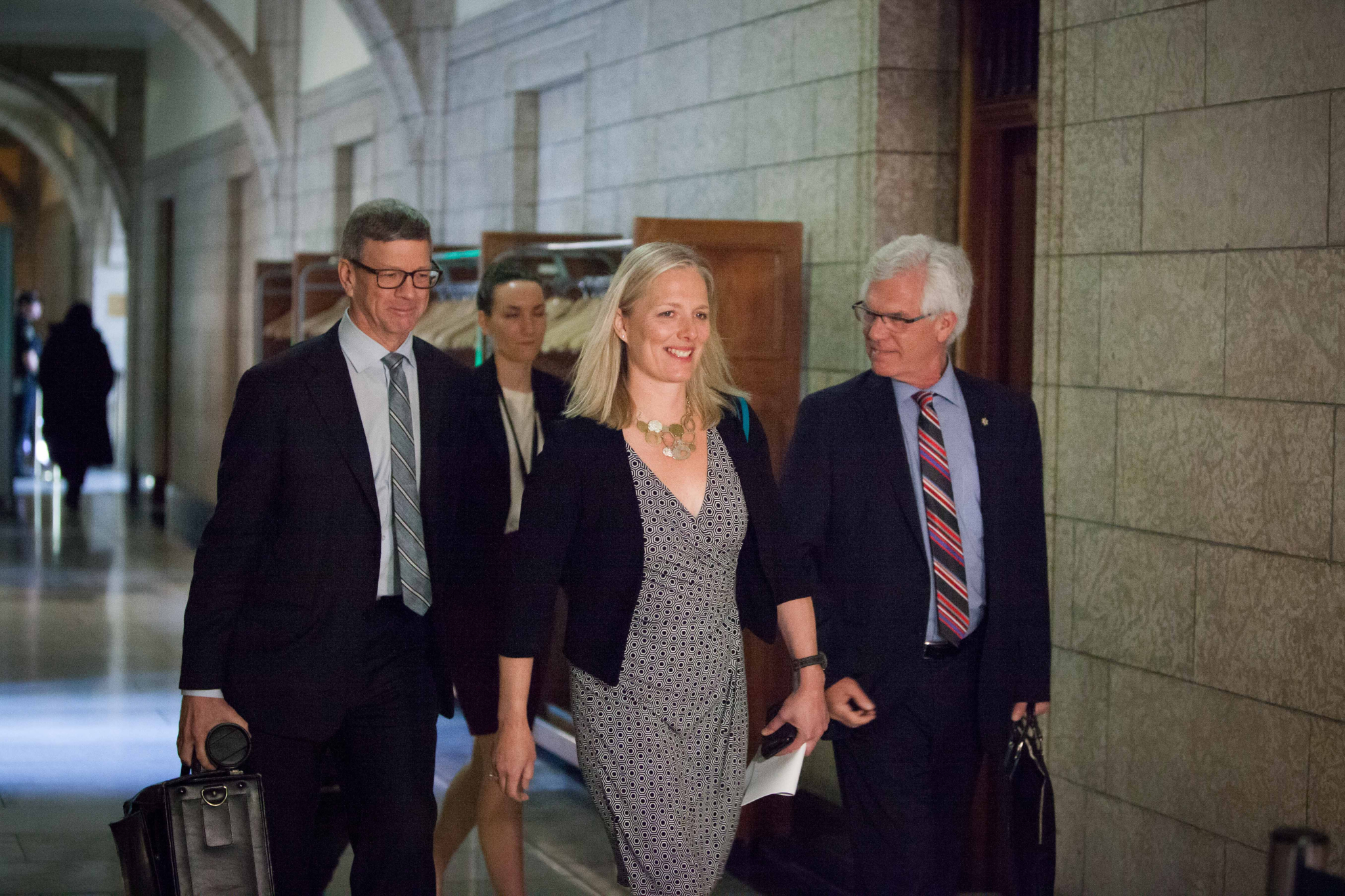 Stephen Lucas, deputy minister of Environment and Climate Change Canada, along with Environment Minister Catherine McKenna and Natural Resources Minister Jim Carr walk outside the House of Commons in Ottawa on May 2, 2017. File photo by Alex Tétreault
Previous story
Next story

Canada’s fossil fuel industry will soon have to make sure a potent form of its carbon pollution doesn't escape from its operations, in order to protect the environment, clean the air and save over $10 billion in avoided climate change costs, according to new federal rules.

The Trudeau government published long-awaited regulations requiring fossil fuel companies to reduce the harmful effects of methane, one of the world’s major greenhouse gases, on April 26. The regulations are contained in the Canada Gazette, the government’s official publication.

The regulations are necessary “for the purpose of protecting the environment on which life depends,” it states. Canada promised in 2016 alongside the United States and Mexico that it would cut methane emissions from the oil and gas sector 40 to 45 per cent below 2012 levels by 2025.

Environment and Climate Change Minister Catherine McKenna announced the regulations on Thursday morning, stating in a press release that they are “smart and practical measures that support clean technology and good new jobs in the oil-and-gas sector.”

Scientists say reducing methane gas emissions is one of the most effective ways of lowering Canada’s climate pollution, because methane warms the planet over 80 times more than carbon dioxide soon after it’s put into the air.

The government says it will save 232 megatonnes of carbon pollution between 2018 and 2035, or the equivalent of taking roughly 50 million cars off the road. It will avoid $11.6 billion worth of damages due to climate change, and significantly reduce air pollution and contribute to health benefits.

The Environmental Defense Fund (EDF), a U.S. conservation group, said the new rules secure Canada a place in history, as “the first country to limit methane at both new and existing facilities nationwide.”

“Canada’s new regulations are a sign of international climate leadership and further evidence that global momentum is building to reduce this powerful pollutant,” said president Fred Krupp in a press release.

EDF also joined several other environmental groups in applauding the new rules in a joint statement.

Rules 'not in alignment' with CAPP plan

The regulations will impose various requirements on the oil and gas sector starting in 2020 and 2023 to better detect leaks, and capture emissions that escape from deliberate venting or from the use of compressors or pneumatic devices.

Oil and gas facilities represent over a quarter of all Canada’s carbon pollution, and are also the country’s largest methane emitters.

The industry's main lobby group, the Canadian Association of Petroleum Producers (CAPP), has supported the 2025 federal methane reduction target. But it has proposed its own way of cutting these emissions.

Throughout the process of developing these regulations, the group has contrasted the government's draft proposal with what it has called its more "flexible" approach, that it has argued will be less financially burdensome.

CAPP also lobbied for a delay in the implementation of the rules, over the objections of environmental groups, saying it needed more time to prepare. The government granted that extension, pushing back the start date from this year to 2020.

The regulations announced Thursday acknowledge that "industry requested a delay" and the new dates are "a response to industry requests for more lead time."

In an interview Thursday, CAPP's director of climate and innovation Patrick McDonald said there are still many components of the final federal regulations that are “not in alignment” with the industry group's approach.

The regulations, said McDonald, are "not going to get to the most cost-effective reduction that our industry is looking for...it’s going to be yet another hit to the competitiveness of our industry.”

He said the rules require operations to be addressed site-by-site, something the group has advocated against. “A site that is very close to local infrastructure and may be very easy to access, is essentially treated the same as a very remote site, that may be only accessible via ice road or helicopter,” he explained.

CAPP has suggested satellite monitoring and other “innovation technology” can help it detect leaks faster, allow for quicker implementation and is a more “effective use of resources.”

The government calculates that industry will spend $3.9 billion to comply with the regulations through 2035, or approximately $230 million a year. But that can be offset by recovering and selling the methane, it said, which will have a combined estimated value of $1 billion.

McDonald said CAPP will "need to do more work" before it can say if it agrees with the government's estimated figure of $3.9 billion in costs. And he was skeptical of the process that the government used to determine the $1 billion of value for captured gas.

“I cannot say that I would agree with that $1 billion figure,” said McDonald.

Provinces are finalizing their own regulatory regimes, and could potentially negotiate "equivalency agreements" with Ottawa related to methane, according to the new rules.

Alberta, where the oil and gas sector accounts for 70 per cent of provincial methane emissions, convened industry and government together, including CAPP, to hammer out a plan. Last November, the province delayed the rollout of its own draft regulations.

The federal regulations introduced Thursday state that there was "extended discussions" with provincial oil and gas regulators and governments in "Western and Atlantic Canada" because of the presence of the fossil fuel industry in those regions.

"At the request of the Western provinces...a special process was undertaken to develop a regulatory co-development framework between these provinces and the federal government," the government wrote in the regulations.

Two days ago Alberta finally released its proposed draft rules. It is now accepting feedback on them through May 28. Advocates want the province to stick with the federal standard and not have Ottawa agree to weaker provincial rules.

"The federal government must now ensure that any provincial rules, such as those released by Alberta Tuesday, achieve equal or greater methane reductions," reads the joint statement from environmental groups.

"If not, Alberta’s proposed regulations could significantly undermine the progress made by Canada’s groundbreaking federal standards."

For its part, CAPP said the next steps on provincial regulation are still to be determined.

“It does look like there is flexibility built into the system for governments to move into equivalency agreements," said McDonald.

"Exactly how that process is going to change or be worked through, I’d say governments will have to work through those details. That being said, it is something that we will continue to work with the provincial government on."

Editor's note: This story was updated at 5:30 p.m. ET on April 26 to include an interview with CAPP and a joint statement from environmental groups.

Methane emissions should have

Methane emissions should have been regulated many years ago. It didn't happen due to the opposition of the industry and the lack of policies from the different level of government. As cited in the article, methane (CH4) has an average life span of 20 years into the atmosphere and a "global warming potential" (GWP) of 84-87. In 2016, methane emissions in Canada were estimated at 96 million tons (Mt) carbon dioxide equivalent or 14% of Canada's total GHG emissions.
Canada should also regulate nitrous oxide (N2O) which has a GWP of 265-298 on a 100-year life span. Nitrous oxide emissions mostly arise from agriculture soil management (73% of emissions in 2013) and transport. It accounted for 37 Mt CO2 eq or 5% of Canada's total GHG emissions in 2016.
(source: National Inventory Report 1990-2016: "Greenhouse Gas Sources and Sinks in Canada" Canada's submission to the UNFCCC, April 17, 2018)
Canada doesn't take into account CH4 emissions and other GHG emissions resulting from forest fires, peatland fires, insect infestations, soil degradation, melting permafrost. The federal government considers those emissions as a result of "natural disturbances" and not due to the intervention of humans; but scientists have indicated that these growing emissions are the result of a warming climate, and that humans are largely responsible for what is happening.

Looks and smells like a whole lot of "smoke and mirrors" on this one. It's all well and good to have regulations that are fair but tough, another to have regulations enforced...something sadly missing from the "self-reporting" welfare oil and gas industry. I won't hold my breath...and neither should most Canadians, given the environmental record of both levels of government...which to my mind is somewhere between pathetic and abysmal.

Let's hope that the Canadian

Let's hope that the Canadian Government doesn't allow the industry to water down these necessary regulations.

Government regulations not in

Government regulations not in alignment with industry's more 'flexible approach' says CAPP representative? Then they must have some teeth! That said, its time we stopped dancing to the tune of an industry responsible for over 40 years of climate change denial and junk science.

It's time to get fighting mad about how their lust for immediate windfall profits have been allowed to put the very planet at risk. So we wait until 2020...or maybde 2023....or maybe until its too damn late to do anything significant about catastrophic temperature rise...

These regulations should be in place immediately.........there's lots of "ethical jobs' to be created for ethical regulators...who will be needed to make this rogue bunch of extractivists comply. People in our rural areas and back country are already aware of the degree to which they cover up rather than clean up....

And methane reduction will follow that same path, unless there's serious surveillance on the ground.

Too right, Mary. If our

Too right, Mary. If our Canadian Government can insist on the building of the TransMountain expansion, surely it is capable of insisting that regulations affecting our environment be followed country-wide.

Do these regulations apply to

Do these regulations apply to the thousands of orphan wells in Alberta and elsewhere? Who would be responsible for stopping the "fugitive" emissions from these leaky, abandoned tributes to the socially responsible oil and gas industry?