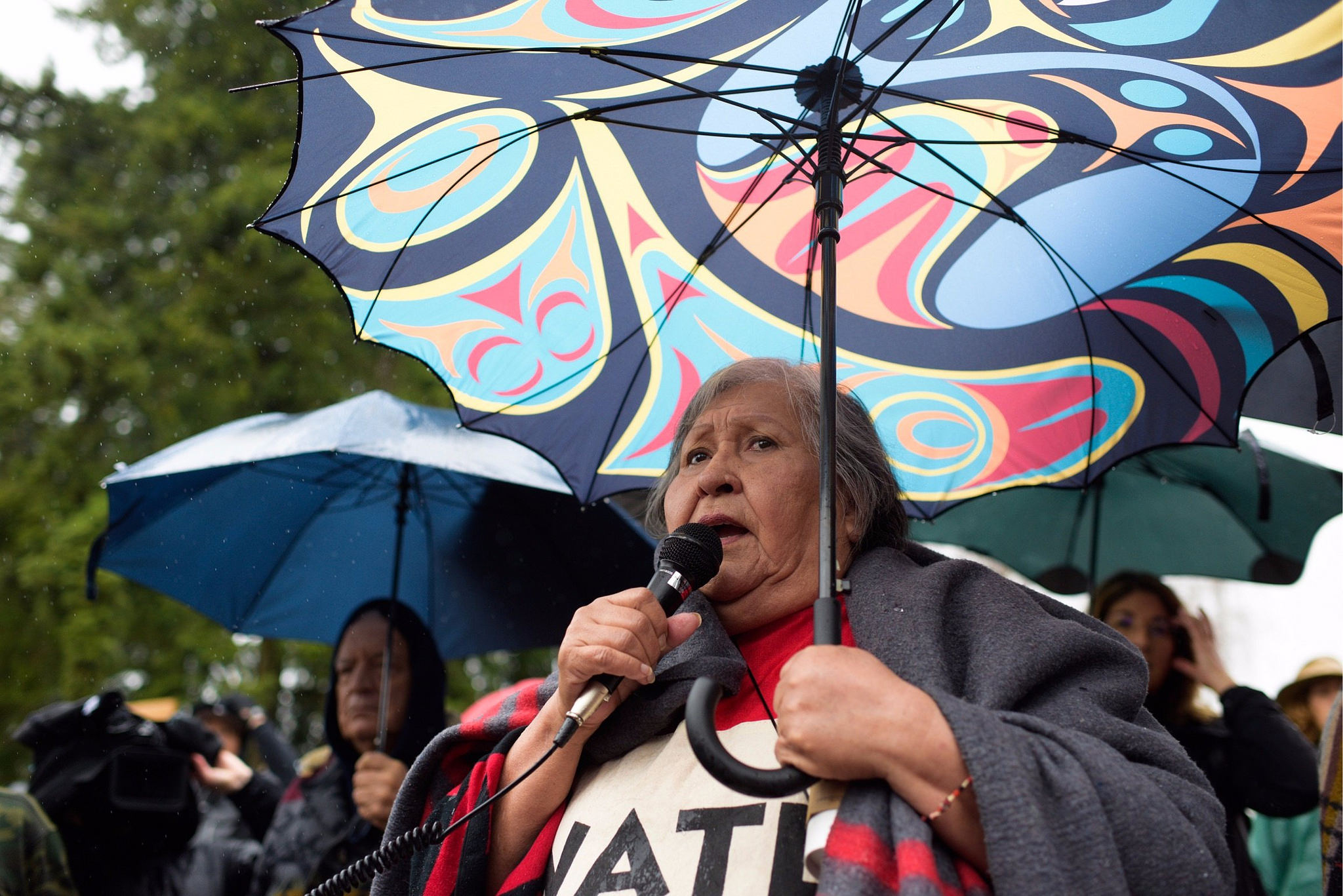 The residential school survivor and grandmother who has given the anti-pipeline movement its battle cry and its heart. Photo from Protect the Inlet.
Previous story
Next story

When the Tsleil Waututh (People of the Inlet) found out in 2012 about Kinder Morgan’s expansion plans (twinning the pipeline, dredging Burrard Inlet, increasing tanker traffic seven-fold to transport toxic bitumen to China), they held a community gathering on their reserve across the inlet from Kinder Morgan’s Westridge facility. This was when Amy George, a 76 year old grandmother, and daughter of Chief Dan George, famously stood up. A strong woman with shoulder-length grey hair and large dark eyes, she told the group that as far as she was concerned there was too much at stake from an oil spill. The inlet – which the Tsleil Waututh have called home for 30,000 years, -- had to be protected

“‘Put down your gameboys,” she said, “and turn off your TV sets. It’s time to Warrior Up!”

The words had their affect.

The Tsleil Waututh unanimously voted against accommodating the Texas oil giant; Warrior Up became the battle cry of the anti-Kinder Morgan movement; and Amy George, Ta’ah (grandmother) as she is affectionately known by indigenous and non-indigenous activists, has become ‘the wisdom and spirit’ behind the protests on Burnaby Mountain, as Stand.canada director Karen Mahon puts it.

I drove to Tsleil Waututh on April 13th to meet with Ta’ah Amy George and ask her about her personal perspective on the Kinder Morgan fight. It was a rainy day, and as I parked outside her unassuming pale yellow house at the end of a road on the reserve, it seemed remarkable yet appropriate that, in a battle that has included Justin Trudeau, Rachel Notley, and John Horgan, not to mention Texas billionaires, the quiet eye of the storm might be none of them – but instead be a grandmother who simply will not allow her home to be destroyed.

“A bird’s been knocking on my window – see?” As Amy George opens her door, she points out markings on the glass pane. “I think it’s bringing me a message. I hope it’s a good one. But it could be a warning.” We sit together at her kitchen table. If it weren’t raining so hard, we could see the Kinder Morgan Westridge terminal across the inlet.

Amy begins by telling me about swimming in the inlet as a girl, of her brother, Leonard, getting swept by the current that flows through the centre, of playing in the salty water all through the summer. We talk about how chlorinated pools can’t compare to swimming in the ocean.

“My father used to carry me on his back,” she recalls. “The water was crystal clear. You could see a crab moving so far down.” After swimming her father would gather clams, set them on a fire around a crab pot. They’d eat what was right there on the beach.

“This is our home,” she tells me, adding that her father once said to her that they’d have to shoot him, before he’d be forced to leave. “Now Justin wants to ram the pipeline down our throats.”

I ask Amy what warrior up means to her personally.

“Those words,” she answers, “they’re not about being brave and going into battle. They’re about taking care of things. Taking care of the whales, and the salmon, the seal, the clams, the oysters.” She leans in further. “They’re about speaking for the living things that can’t speak for themselves.”

She slides without warning to St. Paul’s Indian Residential School, run by Sisters of the Child Jesus, and the Oblates of Mary Immaculate, in North Vancouver. The terrors she experienced happened less than ten miles from where I grew up, in Horseshoe Bay. We played in the same salt water. Like her, I swam to log booms, lay on the logs basking in the sun. Yet when I turned six, I held my brother’s hand and walked to Gleneagles Elementary, while Amy George went with her weeping mother to St Paul’s, where she was locked in a place she now likens to a prison. If anyone tried to escape, she says, they were brought back by the police.

It is hard to touch the past, and yet she does. It’s part of healing, she says.

Almost in a whisper she tells of a little boy who was thrown down the stairs by a nun. His head was badly injured. For two days he complained of headaches before being taken to hospital. He didn’t come back. When a friend of Amy’s worked up the courage to ask what had happened, a nun answered lightly: “Oh, he died.”

There was hard physical abuse, for speaking their language, and for seemingly trivial things, like a time she and a friend innocently played a game of exchanging their shoes. Her hands, where she was whipped, still ache when she weaves.

“One time I got sixteen lashes. What could I have done, a little girl, that warranted this?” She tells me that the children would say to each other not to cry, no matter what. Not to give the nuns the satisfaction.

There was sexual abuse, too. Amy blocked it out for years. “I made my whole childhood gray.” As she meets my gaze, I see the eyes of an old woman, and the eyes of the vulnerable little girl, both at once.

“When I first started talking, I used to get up on the stage and I’d just start to cry. I was so sad. I couldn’t help it. Rueben my son, he said, ‘If it hurts that bad, maybe you don’t have to speak.’” She shakes her head. “I still speak. I’m just learning not to cry so much.”

“Will you keep fighting Kinder Morgan?”

She straightens in her chair. “No matter what,” she says simply. “What more can Kinder Morgan or the government do to me? I guess they could shoot me.”

She is tired. I thank her and go. As I drive away my heart is full.

I think of the little girl riding on her father’s back through the crystal clear water. Then the school-age girl violently hit for whispering in her language to a friend. Then the elder reclaiming her voice. Her message is simple. She is asking us to have courage and join her, to warrior up, to protect the living creatures who can’t speak for themselves.

How many spills have there

How many spills have there been along the coast so far, with the current level of ship traffic? It's not just tankers, but cargo, I think? And even they can spill their operating oil, like the one did in English Bay the other year? What shape are the species in the area, already?

I know the article was about this person's history, not the problem at her hand, but I'm curious not just about what she's fighting for, but what against.