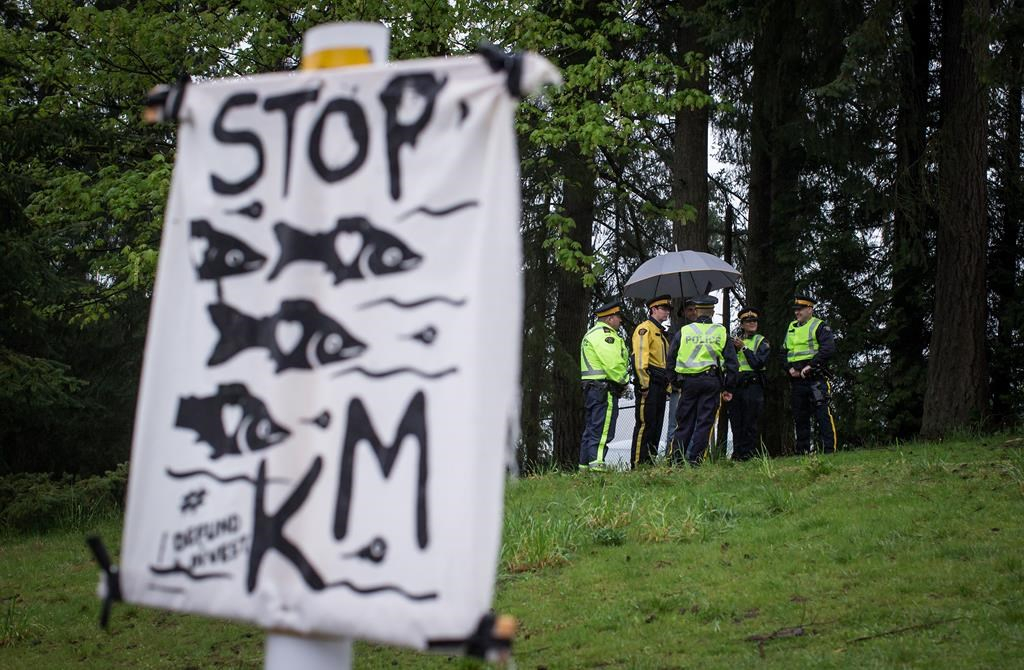 RCMP officers gather nearby as protesters opposed to the Kinder Morgan Trans Mountain Pipeline expansion defy a court order and block a gate at the company's facility, in Burnaby, B.C., on Saturday, April 28, 2018. Photo by The Canadian Press/Darryl Dyck
Previous story
Next story

British Columbia's court case over the flow of heavy oil through the province could be damaged by the NDP government's previous positions against the expansion of the Trans Mountain pipeline, says a legal expert.

The provincial government filed a reference case Thursday in the B.C. Court of Appeal asking whether amendments it is proposing to the Environmental Management Act are valid and if they give the province the authority to control the shipment of heavy oils based on the impact spills could have on the environment, human health or communities.

The province is also asking the court whether the amendments are over-riden by federal law.

Nigel Bankes, chair of natural resources law at the University of Calgary, said he believes the province will lose on the validity question because it is targeting a federally approved project, even though the legislation covers broad environmental concerns.

"All rhetoric, all the public announcements, all the announcements from the premier and the relevant ministers make it clear that this legislation is actually directed at Trans Mountain," he said.

Bankes said a precedent was set in 1984 when the courts ruled the government of Newfoundland and Labrador acted outside its authority by introducing legislation that disrupted Quebec's right to access hydroelectric power from Churchill Falls.

But Prof. Bruce Ryder of York University's Osgoode Hall Law School said that case differs from B.C. because the legislation addresses all heavy oil, not just one particular project.

Decisions made the B.C. Supreme Court in favour of lower levels of government having the authority to create environmental protections in relation to the Northern Gateway pipeline could also support the province's case, Ryder said.

Ryder said he thinks the court will approve the validity question. But he said there is greater uncertainty over permits that would be needed to ship heavy oils through the province because that could be seen to impair or block federal projects, which "would clearly be unconstitutional."

"What we don't know are the details of how the permitting process will work, whether a permit will be granted when requested, what conditions would be attached to it, and absent of specific context with those actual details, it would be difficult for the court to give anything other than a somewhat speculative answer," he said.

The court could either refuse to answer the question due to a lack of information or, more likely, provide guidelines on how permitting could work that operates within the constriction, he said.

Carissima Mathen, vice dean of the University of Ottawa's law faculty, said there is a clear conflict between the B.C. legislation and federal law.

Ryder said if the province's legislation is found to only add conditions to the shipment of heavy oils, the court could determine it does not conflict with federal law.

But if the federal government introduces new legislation to "fortify" its authority over Trans Mountain, it could crush B.C.'s attempt to have some legal jurisdiction, he added.

All the experts expect the case to be appealed to the Supreme Court of Canada.

Kathryn Harrison, a political science professor at the University of British Columbia, said there are many areas where provincial and federal jurisdiction come into conflict, but given the fact the environment is not addressed in the constitution, legal battles over environmental authority are rare.

"It would be good for Canada and the global environment if we had more disputes over environmental jurisdiction," she said, adding negotiations and compromise often result in "watering down" policies.

Here are the three questions the B.C. government has referred to the Court of Appeal:

1. Is the draft legislation within provincial jurisdiction to enact?

2. Would the draft legislation be applicable to hazardous substances brought into British Columbia by means of an interprovincial undertaking?