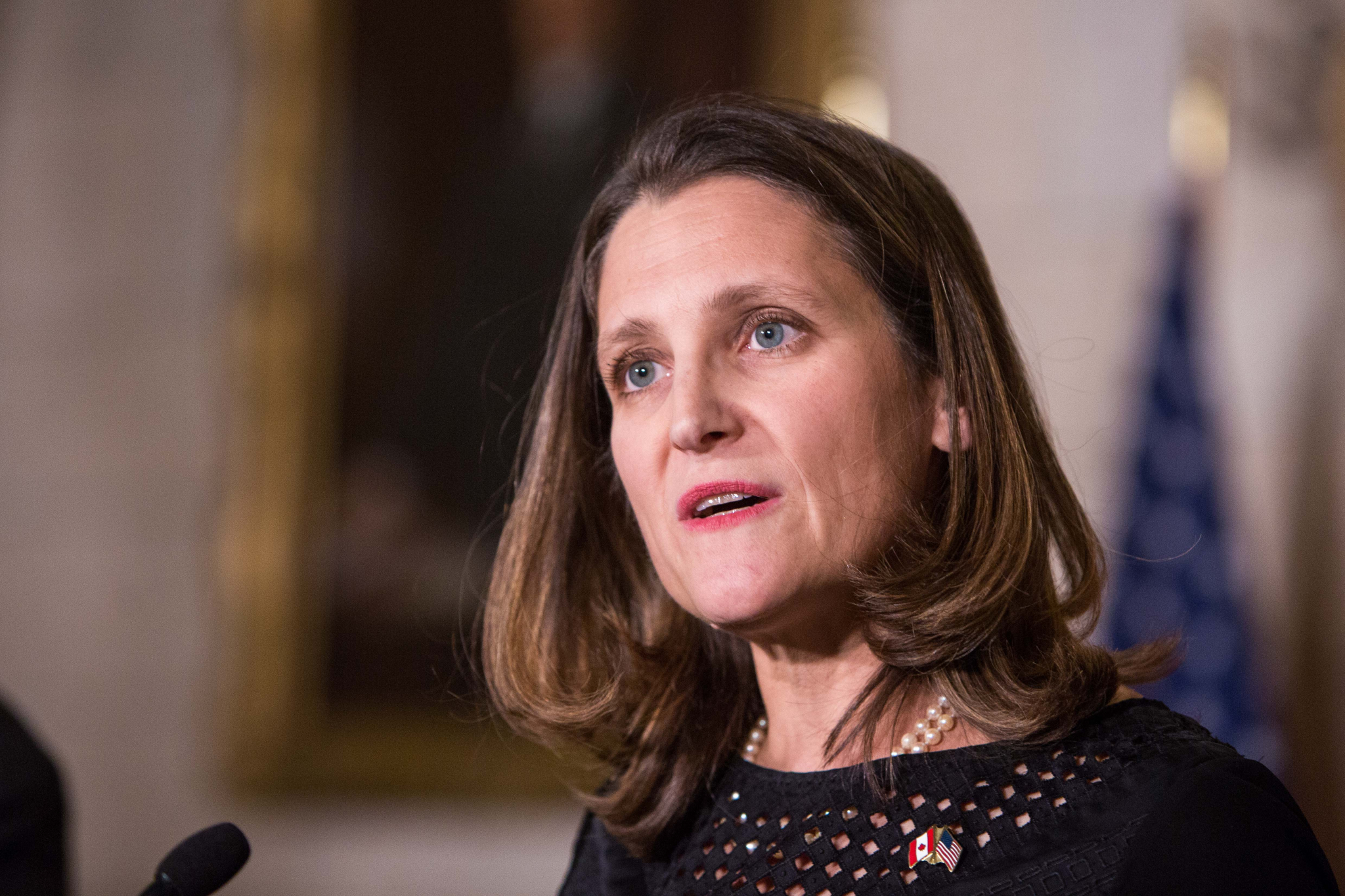 As trade talks continue between Canada, the United States and Mexico, a collection of nearly 50 labour, environmental and anti-poverty groups is urging Foreign Affairs Minister Chrystia Freeland to champion climate change policies into the negotiations.

In a newly-released letter, the groups — including the Canadian Labour Congress, the National Farmers Union, Unifor and Oxfam Canada — warned that the country's current trade policies have a negative impact on sustainable development, the environment and communities.

"It jeopardizes the rights of Indigenous peoples, workers' rights, women's rights, and the right of communities to protect the air, land and water they depend on," said the May 2 letter to Freeland.

"This trade model privileges corporate rights and profits at the expense of people. We — members of Canada's labour, trade, justice and climate movements — call for an alternative model."

The letter said that the ongoing negotiations regarding the North American Free Trade Agreement (NAFTA), provide an opportunity to reverse damage that they say has been caused by the agreement since 1994, including "an expansion of corporate rights over worker and community rights," environmental damage, and weakening regulations to protect public health, consumers and food safety.

The groups also proposed that the minister adopt a dozen principles and values to promote a fairer agreement, including calls for the elimination of fossil fuel subsidies by all three parties, as well as a rule that prevents Canada from reducing its fossil fuel production, the protection of public services, and a gender analysis of the impacts of trade.

"An alternative model of trade must be rooted in principles of equity, the primacy of human rights — including the rights of Indigenous peoples, women and girls, workers, migrants, farmers, and communities — and social and ecological justice," the letter said. "Furthermore, if Canada wishes to be an international champion of action on climate change, its trade policy must be compatible with its climate objectives."

Sharing wealth 'with all people, not just the privileged few'

Hassan Yussuf, president of the Canadian Labour Congress, said in an interview that he has raised these issues with the minister. He explained that trade agreements have important impacts on the broader issue of climate change efforts and that Canada always needs to find ways to be better.

Yussuff has been participating on a government advisory panel that had a conference call with Freeland to discuss the latest developments on Monday.

He also noted that Prime Minister Justin Trudeau has made recent comments that stressed Canada should only sign trade deals that benefit everyone, including the middle class.

“Canadians realize access to the American market is vital and important,” Yussuff said. “They also want to see it compatible with wealth that is shared with all people, not just the privileged few.”

Yussuff also said that the negotiations provide a good opportunity to address some of the consequences of NAFTA, 25 years later, including provisions in Chapter 11 of the deal that allow companies to bypass domestic judicial systems and sue governments in tribunals that tend to favour corporate interests.

“I’m optimistic we will be able to get Chapter 11 out of the agreement,” Yussuff said. “We have been very clear that this is something we took issue with right from the get go, so (Freeland) is certainly aware of our position.”

He said that all of these issues are coming up, 25 years after NAFTA came into force, in a context where people can judge whether the original agreement fulfilled its promise to improve growth, as well as social programs with better benefits.

Yussuff said he doesn’t think Canada has achieved this yet.

At the same time, he noted that neither the Americans, nor the Canadians appear to be moving on some of their negotiating positions. This would include a U.S. push to undo the rules surrounding supply management in Canada’s dairy industry.

“These things always get solved at the last minute and we’ll see if the American position evolves and reflects the demands that Canada made,” he said.

Freeland's office did not immediately respond to a request for comment.

Editor's note: This article was updated at 2 p.m. ET on May 2, with new comments from Hassan Yussuff, president of the Canadian Labour Congress.

The caption below the photo

The caption below the photo of Chrystina Freeland shows a date of Dec 19, 2018. Small point but the calendar has not reached Dec 2018 as yet..