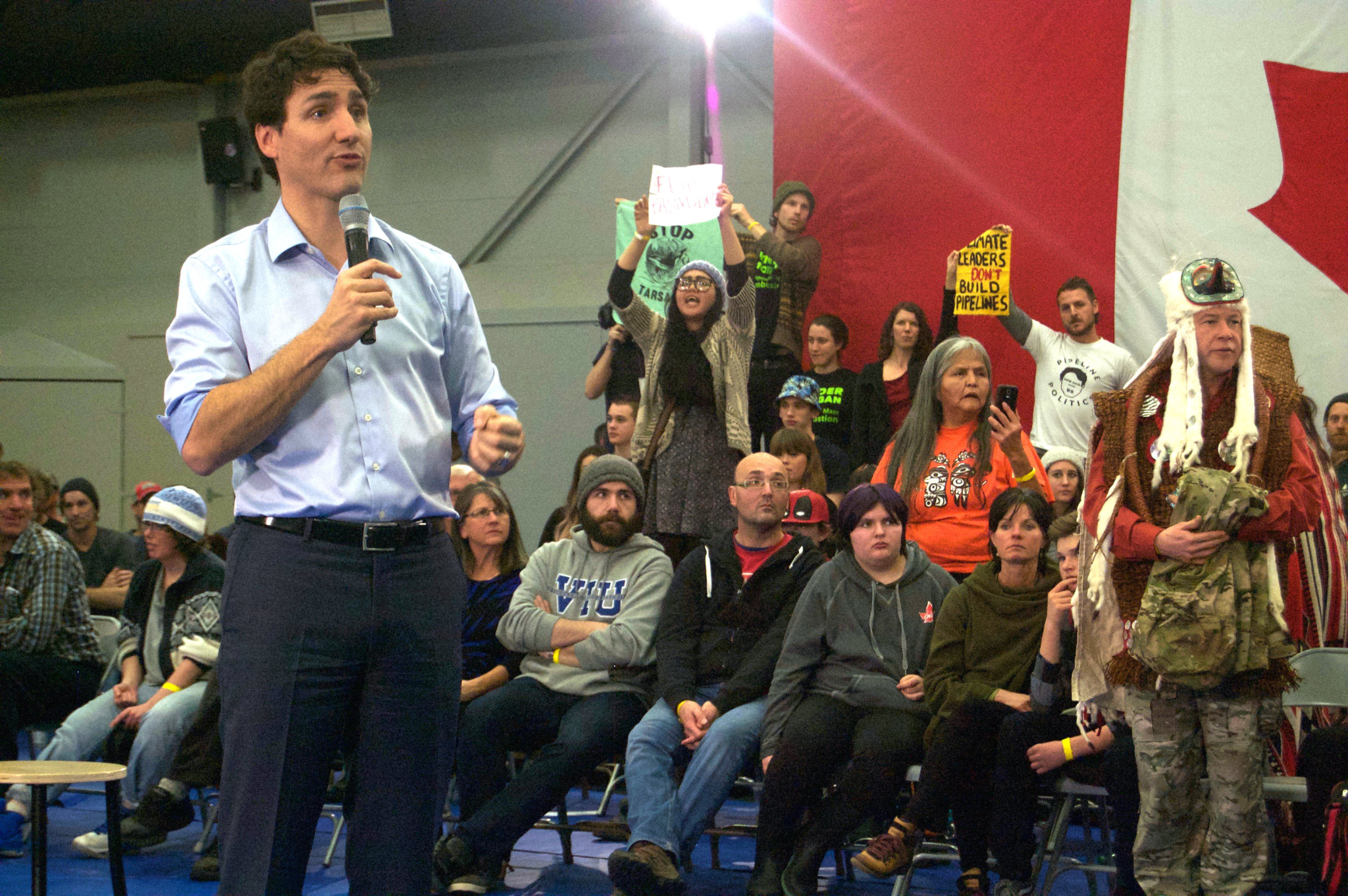 Prime Minister Justin Trudeau addresses the audience at a town hall in Nanaimo on February 2, 2018. Photo by Ed Ngai
Previous story
Next story

On the last stop of his cross-country tour in Nanaimo, Justin Trudeau threatened to ditch NAFTA, kicked out three protesters, and left the venue chased by a mob shouting “Stop Kinder Morgan!”

Seventeen hundred people packed the venue: those looking to snag the best real estate right behind the prime minister arrived at 3 a.m. But because of low ceilings at Nanaimo airport, Trudeau himself was almost an hour late.

When he finally arrived, some in the crowd had grown grouchy.

Much of the anger centered on the Kinder Morgan Trans Mountain pipeline expansion project, which proposes to triple the amount of crude oil pumped from Alberta to Burnaby. The plan calls for 980 kilometers of new pipeline, tripling the amount of bitumen — 890,000 barrels a day — that will be shipped through the Juan de Fuca Strait on its way to Asia.

“We’re going to get the Trans Mountain pipeline built,” Trudeau said on Thursday in Edmonton.

On Vancouver Island, Trudeau did not back down. Citing his rejection of Enbridge’s Northern Gateway pipeline, the prime minister argued that safe oilsands development is possible while committing to protect the B.C. coast and meet Canada’s Paris climate accord targets.

“Most Canadians understand we need to build a stronger economy while protecting the environment at the same time,” Trudeau said. He said he chose the Kinder Morgan pipeline because its oil would “arrive in a well-serviced, busy port with the capacity to deal with incidents and challenges.”

Torrance Coste, a campaigner for Wilderness Committee, said Trudeau can’t have it both ways on environmental protection. Seated behind the prime minister, he raised a bright yellow sign that said “climate leaders don’t build pipelines.”

“I’m getting sick of his view, ‘We don’t have to choose between the environment and the economy’ when the economy he’s talking about is growing the tar sands," he said. "That’s an economy that poisons Indigenous waterways and pushes endangered species to the brink, all to destabilize the atmosphere and threaten the future of every living thing on this planet. When he’s talking about that economy, he does have to choose.”

But environmentalists were not the only frustrated negotiators in the room. After a week of largely fruitless NAFTA talks in Montreal, the prime minister issued his firmest threat yet about the stalled trade negotiations.

“Canada is prepared to walk away from NAFTA if the United States proposes a bad deal,” he said. “Canada is not going to be pushed around.”

Trudeau took two questions each about housing affordability and the summer job “values test.” He received one question about fish farm “evictions” from Indigenous land, but declined to call on the Tlowitsis Nation, who planned on pressing him to support their campaign against big aquaculture on Vancouver Island.

“We just announced the creation of a panel to dig into the science, the data, to get a proper understanding of how we move forward,” Trudeau said. He promised any path forward would draw heavily on local Indigenous knowledge.

But this answer left the Tlowitsis members unsatisfied. With two questions to go, they stood up and left the room, singing, while the prime minister pretended not to notice. He snapped back to attention when an empty plastic bottle was thrown at his chair.

“We are anti-pipeline, anti-LNG, anti-fish farm. He doesn’t want to hear us. He saw all of us, in our regalia, and he didn’t call on a single one of us,” said Tsastilqualus, who is from the Ma’amtagila territories.

“His answer [about fisheries] was a lie. The moment they can cut out the people, they’ll cut out all the jobs, all the people.”

-- with files from Ed Ngai

Kids: About: “But “environmentalists” were not the only frustrated negotiators in the room. After a week of largely fruitless NAFTA talks in Montreal, the prime minister issued his firmest threat yet about the stalled trade negotiations.”

Am I correct to understand that Canadians (all humans?) can be separately categorized based upon 'environmental' issues that affect an 'economy'?

Canada has approx 35 million humans. Which ones are 'environmentalists'? Which are not? All are part of the 'economy'. As I understand it, the needs and demands of all 'environmentalists' and other humans, drive economies. Perhaps, and accordingly, we need re-frame the understanding about who is for, and who is against 'the environment'?

It would seem, in Canada's case, approx 35 million people are environmentalists, which includes an incredibly small group of business leaders – who I understand, at least, to be humans. Surely, this latter group isn't hell-bent on destroying life on the planet for a buck. Right?

It's time to keep more eyes

It's time to keep more eyes on Trudeau. The way he went from a PM of hope in October 2015, to "the pipeline will be built"; he's going "nuclear", and he's going to say something that could be interpreted as terrorism.