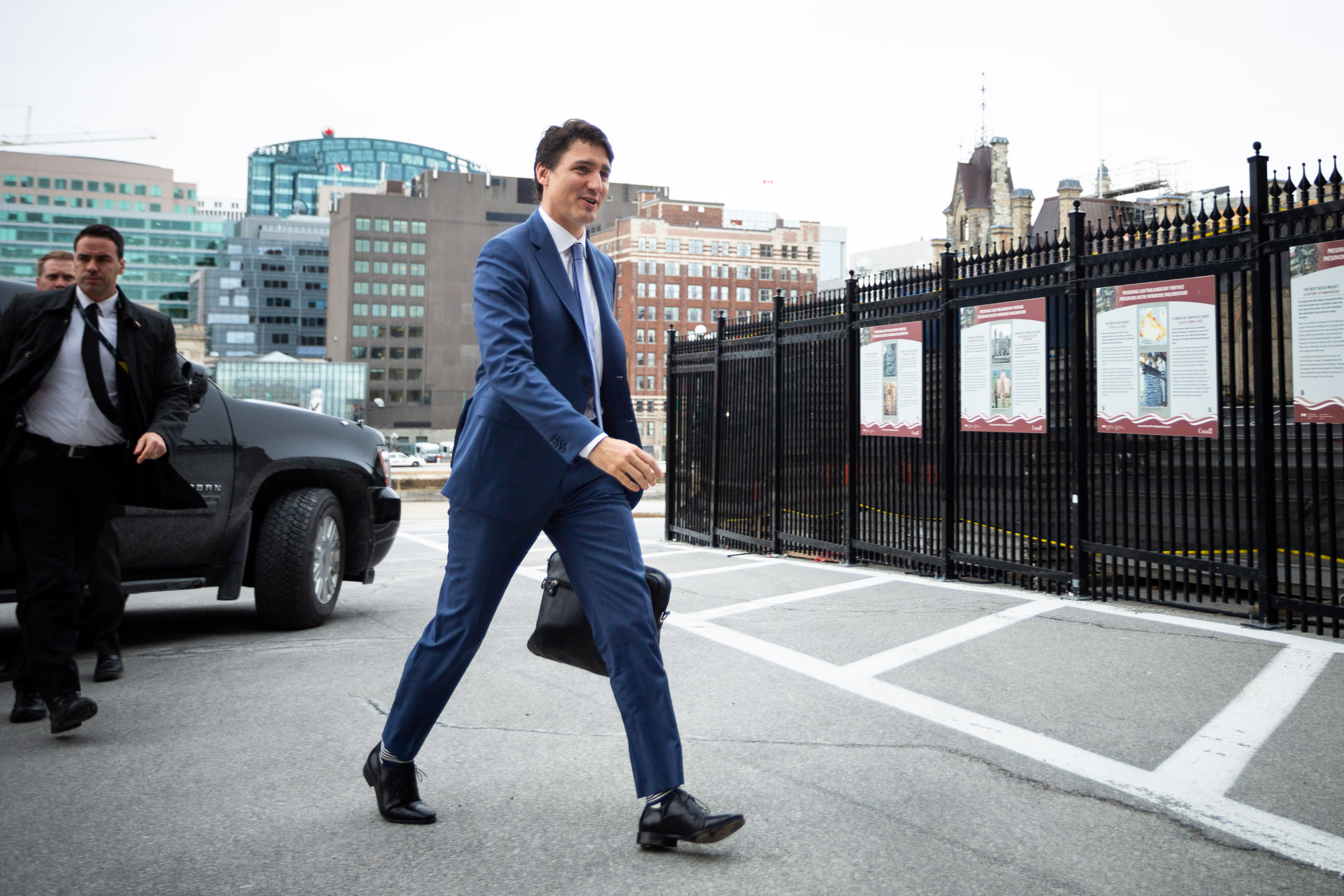 The Federal Court of Appeal is being asked to examine some “highly unusual” and "extremely alarming" circumstances surrounding the Trudeau government’s approval of a major west coast pipeline.

In a 17-page motion filed on Wednesday, lawyers for the Tsleil-Waututh Nation argued that the government has been sitting on evidence which could lead the court to quash the project, Kinder Morgan’s Trans Mountain pipeline expansion linking Alberta oil producers to a Burnaby terminal in Metro Vancouver.

The submission says that more than a dozen documents uncovered by National Observer, through access to information legislation, confirm their allegations that the Trudeau government had a “constitutionally-impermissible ‘closed mind’ or a ‘mind made up' during the entire review process preceding approval of the oil pipeline proposal in November 2016.

It also asks the court to compel the government to release uncensored versions of the documents, along with some related internal records. If accepted, this motion would essentially reopen an existing case to allow the court to consider the new evidence.

The case was launched by several First Nations who have alleged that the Trudeau government failed in its constitutional duty to consult them, prior to announcing approval.

The court wrapped up hearings in the case last fall and it was expected to issue its ruling this spring. But lawyers for the Tsleil-Waututh Nation (TWN) say that there are exceptional circumstances at play which require the court to re-open the case and consider the new evidence uncovered in a recent investigation by National Observer.

Using a collection of documents released through access to information legislation and information from public servants, National Observer reported that officials sped up their review of the Trans Mountain project following lobbying by Kinder Morgan in January 2016.

The reporting also revealed that a high-ranking official instructed public servants in October 2016 to find a "legally-sound" way to approve the oil pipeline, several weeks before the government had concluded its consultations with First Nations.

“The facts and circumstances which have given rise to this motion are highly unusual and, indeed, extremely alarming,” said the motion, submitted on May 2 to the Federal Court of Appeal by lawyers Scott Smith and Paul Seaman in Vancouver.

“The facts and circumstances which have given rise to this motion are highly unusual and, indeed, extremely alarming,” said the motion, submitted on May 2 to the Federal Court of Appeal by lawyers for the Tsleil-Waututh Nation.

Prime Minister Justin Trudeau and his cabinet announced that they were approving the pipeline on Nov. 29, 2016, following a review process that included consultations with more than 100 affected First Nations groups.

The government is legally obligated, under Section 35 of Canada’s Constitution, to engage in meaningful consultations on any decision that could affect the rights or the territory of Indigenous people. But federal sources who were involved in the Trans Mountain review alleged they were instructed to find a way to approve the project, even though consultations with affected First Nations were ongoing.

Trudeau had also promised, during the 2015 election campaign, to restart federal reviews of major projects such as Trans Mountain, due to public concerns that they were rigged by rules introduced by the outgoing government of former prime minister Stephen Harper.

But once elected, Trudeau allowed the continuation of the federal review of Trans Mountain that had been launched under Harper. Instead the newly-elected government introduced interim principles to expand consultations. Public servants warned that these additional steps weren't working, noting in internal emails and memos that First Nations felt the process was "paternalistic," "inadequate"and "unrealistic."

TWN was able to access internal federal records released through access to information after National Observer began posting them on Scribd, a public document-sharing site, on April 26, 2018. The documents have collectively been viewed more than 100,000 times by members of the public, since they were released by National Observer.

“They (the documents) strike at the core of an issue central to these proceedings: namely, whether the honour of the Crown was upheld by Canada during its consultations with TWN in connection with the Trans Mountain Expansion Project,” wrote Smith and Seaman.

“The documents establish that it did not; rather they corroborate grounds, evidence, and argument that TWN has already advanced in these consolidated proceedings: that (i) Canada’s representatives had an insufficient mandate — limited to listening to concerns and recording them, and (ii) Canada proceeded during that time and in approving the Project with a constitutionally-impermissible ‘closed mind’ or a ‘mind made up.’”

Honour of the Crown is 'at stake'

The federal government told National Observer that it was reviewing the motion introduced by the Tsleil-Waututh lawyers, reiterating a statement sent by Natural Resources Minister Jim Carr that said the Trans Mountain decision was made by cabinet alone. It would have about two weeks to respond to the motion. Trans Mountain didn't respond to a request for comment.

While a request to reopen a case to hear new evidence is unusual, it isn’t unprecedented. Smith and Seaman cited a decision from an unrelated civil case at the Federal Court in April 2011 as an example. In that case, new evidence was introduced following evidence that indicated inaccurate information had been presented during a trial that concluded two months earlier.

The latest legal maneuvers come as the federal and Alberta governments are pursuing financial negotiations with Kinder Morgan to prevent the Texas energy company from canceling the project. The company announced in April that it was suspending non-essential operations and considering the possibility of terminating the project due to uncertainty caused by opposition in British Columbia.

Smith and Seaman described Canada’s actions as cynical, arguing that the court needed to reopen the case to new evidence in order to ensure that Indigenous peoples and the Canadian public remain confidence in the judicial process.

“These consolidated proceedings are of course of significant national public interest,” the lawyers wrote. “The honour of the Crown is at stake. Justice must be done and seen to be done in accordance with the rule of law. This requires that this Court decide this matter on a full evidentiary record, inclusive of the ATIP Documents, so that it may properly fulfil its role as a reviewing court.”

The Tsleil-Waututh Nation said it tried on its own to obtain documents through access to information legislation, but was “stymied” at every turn by the government. Under Canada’s Access to Information Act, the government is required to release federal records upon request within 30 days to anyone who pays a $5 fee, unless it has a valid reason to refuse.

The nation said it made multiple requests to four different government departments involved in reviewing the Trans Mountain project on March 22, 2017. More than a year later, it said it had not received any documents from three of those departments.

The new motion filed this week also cites a recent Supreme Court of Canada case that quashed plans for seismic testing on Inuit territory in Clyde River, Nunavut. In that case, the Tsleil-Waututh lawyers noted that the final ruling warned that "no one benefits — not project proponents, not Indigenous peoples, and not non-Indigenous members of affected communities — when projects are prematurely approved only to be subject to litigation."

Bravo ! and thank you for

Bravo ! and thank you for your diligence and care for the truth. You make a deep difference to our world

This is very sad news. It

This is very sad news. It appears that the Harper government which I voted against when I voted for Trudeau is alive and well, certainly the paternalistic, disrespectful and even deceitful tactics employed here. The Liberal motives might be more palatable to me (to keep the country together, to help the economy?) but many wrongs, no matter how well-intentioned, don't make a right. At the very least, Trudeau should open this matter up to a public enquiry and not be bullied by pipeline sales tactics.

I guess it's like saying that the NEB hearings were predetermined? What a surprise, to those who have been watching the shenanigans from the sidelines. Trudeau and his crony capitalists are about as transparent as a brick wall. The whole process has been a sham for start to finish, and then the government makes it worse by offering to "bail out" Killer Morgan...not just the feds, but the stupid Notley government who are marching in lock-step with a very well subsidized welfare oil industry. This is beyond the pale.

Thanks Mike for your work on

Thanks Mike for your work on this!
This is what happens when you have a puppet government working for the oil patch. It is the sort of stuff that should bring down a government but this is Canada where the Crown is desecrated on a regular basis...https://canadianviews-ymo.ca/killing-the-host-canadian-style/