Got Consent? What part of ‘no’ does Kinder Morgan not understand? 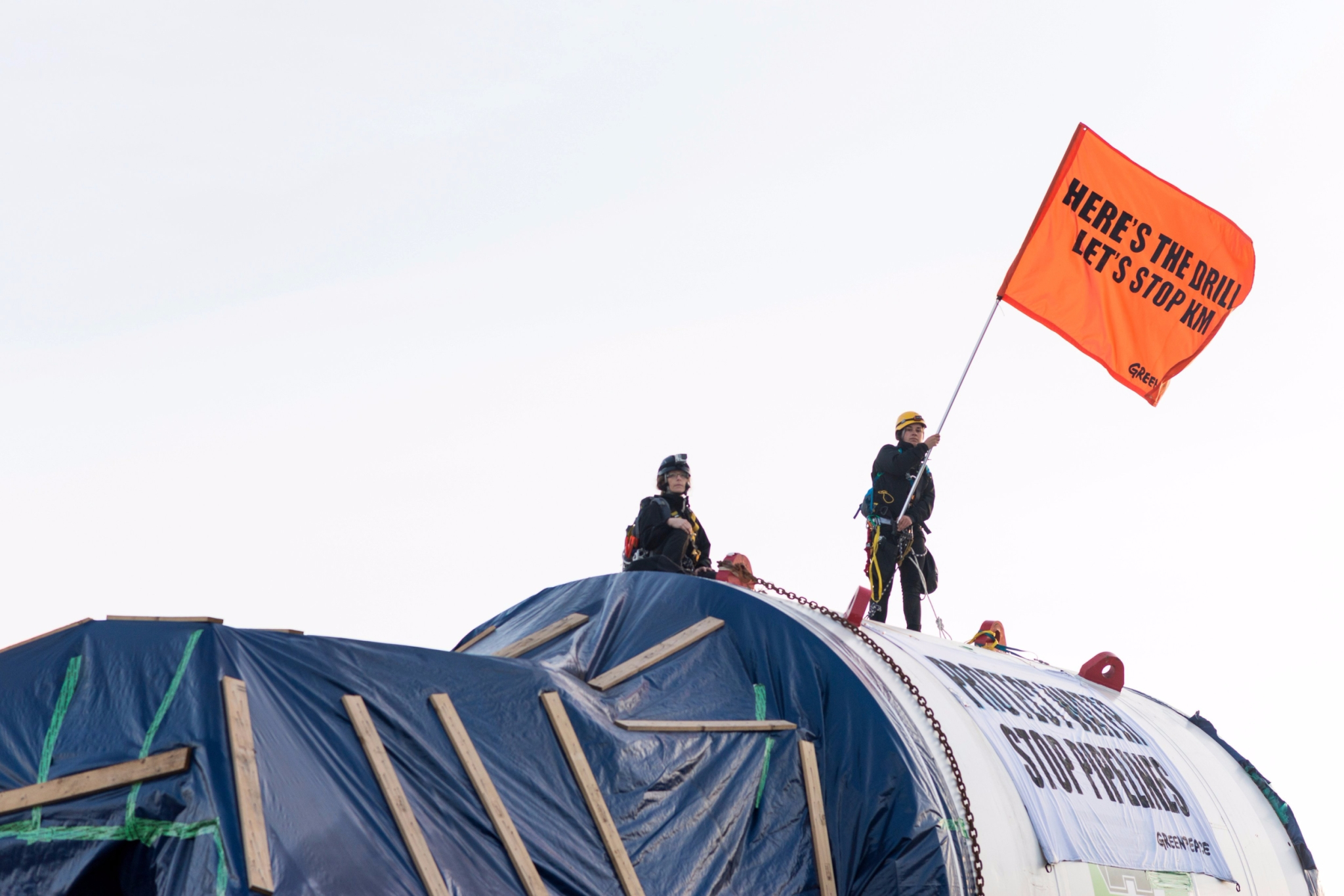 Two women scale Kinder Morgan's Tunnel Boring Machine (TBM), occupying one of the most important pieces of equipment the company needs to build its new pipeline. May 3, 2018. Photo by Duncan Cairns-Brenner/Greenpeace
Previous story
Next story

Last Thursday two women from Greenpeace’s action team, Laura Yates and Mary Lovell, climbed a ‘monster pipeline drill’ — a juggernaut of a steel borer that Kinder Morgan plans to use to force a passage through Burnaby Mountain. “The community hasn’t given its consent,” Mary Lovell called down to supporters and media.

The image of the two women atop a huge, undeniably phallic-looking piece of machinery, shouting words about consent, startled us and made us think. We are a mother and daughter who have been arrested at Kinder Morgan blockades, and we have also experienced sexual harassment and ‘the revolution of refusal’ of the #MeToo movement — recently sharing some of our experiences with each other for the first time. To us, the two fights suddenly seemed so similar, it was hard not to see the links.

Both are about consent, about hearing the word ‘no’ and actually respecting its meaning. At a deeper level, both are also about a culture that tacitly normalizes abuse and violation — whether it’s violating the body of a woman, or ramming a monster drill through a mountain where residents are adamantly opposed.

With the rise of #MeToo, a societal picture suddenly formed out of isolated puzzle pieces. A picture not just of victimised individuals, but of an entire society of women who had had their abuse and harassment normalised. Silence was broken. Stories shared. What had been accepted because of isolation and shame was brought into the open and suddenly seen for what it was.

This is happening on an environmental and human rights level too, around the Kinder Morgan pipeline fight. Indigenous peoples, such as the Tsleil Waututh of Burrard Inlet, were silenced and isolated in the 1950s when the Westridge oil facility was initially built. They didn’t want it, but they weren’t asked, and the terminal was built on waters they’ve fished for thousands of years, irreparably harming marine life.

Not only are they and other Indigenous nations leading the mounting chorus of ‘no’s’ — they are joined by Burnaby residents, coastal dwellers, people physically displaced by the pipeline, bird lovers (Burnaby Mountain is a bird sanctuary), salmon stream protectors, and tens of thousands who have drawn a line in the sand because of climate change.

As we link together, we get a good look at who we are. The picture is shifting from isolation to empowerment. Belittle us and demean us at your peril. We are standing for each other now.

Why, for instance, should the voice of a First Nation that has lived on these waters for 30,000 years not be absolutely central to this decision? Why should they have no recourse but to go to court? Why, for that matter, should the ‘no’ of a mother whose children play on the trails of Burnaby Mountain mean less than the voice of a Texas oil man?

Here’s something #MeToo has taught us. Just because you’re big and powerful, doesn’t make you right.

'Here’s something #MeToo has taught us. Just because you’re big and powerful, doesn’t make you right' by @shaenalambert on Trudeau and #kindermorgan

The opposition to this pipeline is a real thing. And it’s not going to go away. Not only does the B.C. Union of Indian Chiefs oppose the pipeline, as well as the First Nations whose ancestral lands encompass Burrard Inlet, it is opposed by 107 First Nations along the pipeline route, 76 per cent of residents in Burnaby, the Province of British Columbia, the State of Washington, the cities of Vancouver and Victoria and 19 other B.C. municipalities. A recent Insights West poll shows that 12 percent of British Columbians would engage in civil disobedience to stop the Kinder Morgan pipeline. In two months, more than two hundred have already faced arrest, a diverse group that includes university professors, engineers, indigenous storytellers, costume and set designers, film-makers, leaders from the Anglican church and other faith communities, at least one tech entrepreneur, and a large number of grandmothers and grandfathers.

Yet you wouldn’t know this, listening to Justin Trudeau. He told Canadians during his election year that governments grant permits, but communities grant consent — a line that helped win him support. Now it’s sounding more hollow; a bit, in fact, like a pick up line at a party. As pipeline opponents raise indigenous rights, oil spills and the climate crisis, Trudeau keeps nodding and smiling, giving the impression that he ‘totally gets our feelings.’

Then he just keeps doing what he wants to do.

This naturally creates a fear that ‘no’ actually doesn’t mean anything, that consent is meaningless. There is even fear that violence could be used to ram this pipeline through: that’s what Natural Resources Minister Jim Carr threatened in 2016, bandying words about the Emergency Act being invoked, words echoed recently by former Alberta Energy Minister, Rick Orman, who advocated sending in the military against protestors. This sense of threat has been made worse by the recent rash of Facebook photos showing Albertans holding signs that tell British Columbians to ‘lay down and take’ their pipeline.

And yet there is another way. Just as #MeToo held out a new mirror of respect and valuation, the fight against Kinder Morgan points to something far larger.

Both start with a profound question for society. How important is it to truly listen to one another, to take seriously the deeper conversations surrounding consent? How do we get to a place of mutual respect? Quick answers, lip service and the tacit threat of violence won’t get us out of the climate crisis, or create a culture that fosters reconciliation. Our crisis is so severe, only a container of respect can hold us together as we seek solutions for the planet.

As well, at the most basic level, the body of our land and waters deserve to be listened to, just as women’s bodies deserve respect and autonomy. When the earth shows us sign after sign of being unable to bear more damage and pollution, as our oceans fill with plastic, and rising temperatures threaten ecosystem after ecosystem, will our government actually listen and respond to that plea?

As we have learned so painfully, not only from #MeToo, but from the trauma inflicted on indigenous people in Canada, once trauma has occurred, speaking out, though a big step forward, can never take away the pain.

And apologizing isn’t anywhere near enough.

We’re sure that Justin Trudeau would make an amazing, honest and sincere-sounding apology if there was an oil spill in Georgia Strait. A really good sorry, like so many men in the wake of #MeToo. But we want more than that.

We want to be listened to now.

The warriors and the Watch House