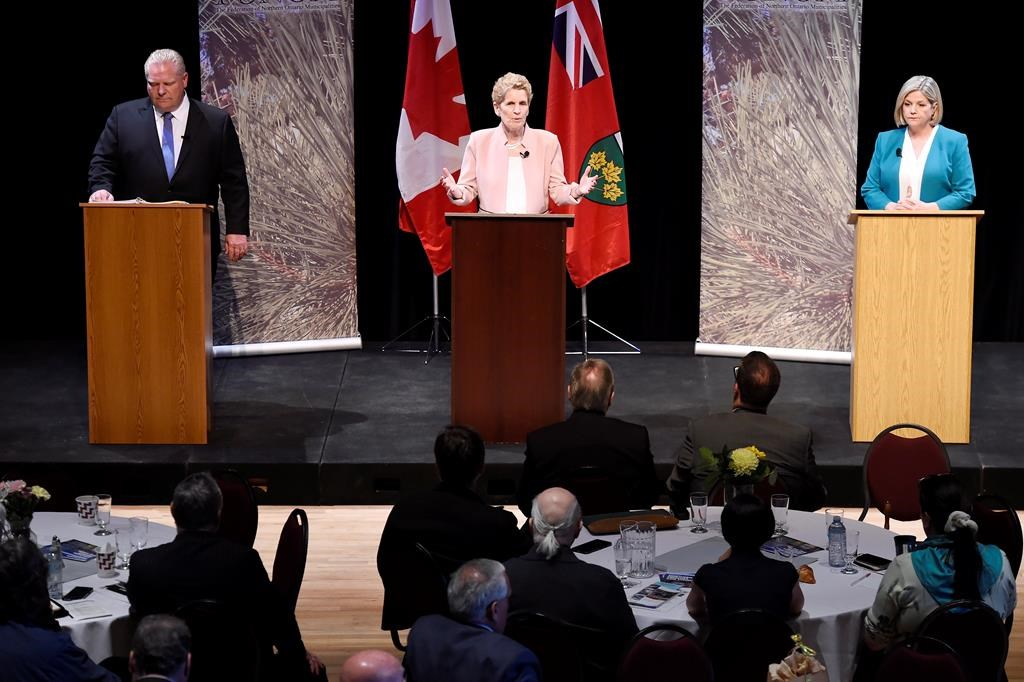 Ontario's Progressive Conservative leader is promising a no-holds-barred approach to mining development in the province's north, as his Liberal and NDP election campaign rivals caution against ignoring northern communities and destroying the environment.

Doug Ford said at a leaders' debate on Friday that he would push hard for mining in Northern Ontario, home to the Ring of Fire. The Ring is an area in the James Bay lowlands that is rich in minerals, but lacks infrastructure and is surrounded by sensitive ecological areas and First Nations.

“All we’ve heard is talk, talk, talk, no action,” Ford said during the debate on northern issues in Parry Sound, Ont. on May 11. “We’re going to go in there and start mining.”

As well as suggesting the Liberal government has been slow in getting development going, Ford took aim at the New Democratic Party candidate for Lanark-Frontenac-Kingston, Ramsey Hart, a former researcher and advocate with Mining Watch Canada, repeatedly labeling him an “extremist environmental activist" or a variation of that.

Development in the Ring of Fire region has faced complications. U.S.-based Cliffs Natural Resources, for example, sold its Ring of Fire assets in 2015 for a fraction of the cost amid a commodity slump. As well, at 500 kilometres north of Thunder Bay, there are no roads leading to the area or other infrastructure needed for mining.

Proponents, including the current Liberal government of Premier Kathleen Wynne, say the Ring could be one of the biggest resource rushes in Ontario’s history. But the government also says it wants to respect First Nations’ perspectives and traditional knowledge when making decisions affecting their land, air and water.

Other resource projects, like the Trans Mountain pipeline expansion in Alberta and B.C. and the Muskrat Falls hydroelectric project in Newfoundland and Labrador, have faced protests by Indigenous groups and their supporters after being seen to have been out of step with First Nations’ wishes.

Shovels will soon be in the ground

The Ontario government promised $1 billion for Ring of Fire infrastructure and said last year it had reached deals with Webequie, Marten Falls and Nibinamik First Nations to plan and build a year-round access road into the proposed development site, as well as roads linking First Nations with provincial highways.

“In order for the Ring of Fire to go forward there needs to be social supports,” said Wynne during the debate. She touted progress on the access road plan, saying “shovels will be in the ground in the next few months.”

Wynne said as development moves forward, she was keen to “make sure that the degradation of the environment that has happened in the past, the neglect of First Nation communities...won’t happen because they are part of the process.”

One challenge facing the region, she said, was climate change leading to more Northern Ontario roads requiring all-weather use as the climate warms.

Ford said he would also “work with First Nations” and “respect the treaties that are in place right now.” But he argued resources in northern Ontario were too lucrative to overlook. “We have a gold mine of minerals up there,” he said.

The PC leader has promised a resource revenue-sharing program that would distribute a portion of provincial revenues from licensing and taxes to northern communities.

Ford spent much of his time during the debate blasting away at Hart, for his former work for the Ottawa-based research and advocacy group Mining Watch Canada. The group has raised questions about Ring of Fire environmental safeguards and how mining infrastructure would benefit First Nations.

Ford called Hart an “extremist environmental activist" or a variation of that several times. NDP leader Andrea Horwath returned fire, saying “the entire mining industry has been working for the last decade or more” on the issue of sustainable development.

“That’s where the industry is — I don’t know where you are, Doug,” she said.

Horwath said she’s also in favour of Ring of Fire development: “I don’t know how many times there were announcements and ribbon cuttings, and of course here we are 10 years later with that opportunity still missing.”

She said her focus was on keeping jobs in Northern Ontario. She also noted frustration in the north about major decisions being made at Queen’s Park inn Toronto. “Southern decisions need to be viewed through a northern lens,” she said.

The NDP has promised in its platform to establish a “northern committee” in the provincial legislature, composed of all northern MPPs, to review any legislation affecting the North.

It should be noted that the

It should be noted that the Green Party of Canada has led all other parties for many years in advocating for an orderly, sustainable development of the Ring of Fire resource. Other parties are late-comers to this issue.

It needs to be added that

It needs to be added that Canada & Ontario's aversion to development of ground transportation in Northern Ontario is beyond comprehension. This willful blindness has hurt all Canadians, but especially the many First Nations of northern Ontario.

Didn't the Ontario government some time back create some protected area regulations for a huge part of Ontario north of HWY 11? If not, they talked about it because it will impact endangered caribou. Roads, even logging roads or cut lines, open up remote areas to wolves.