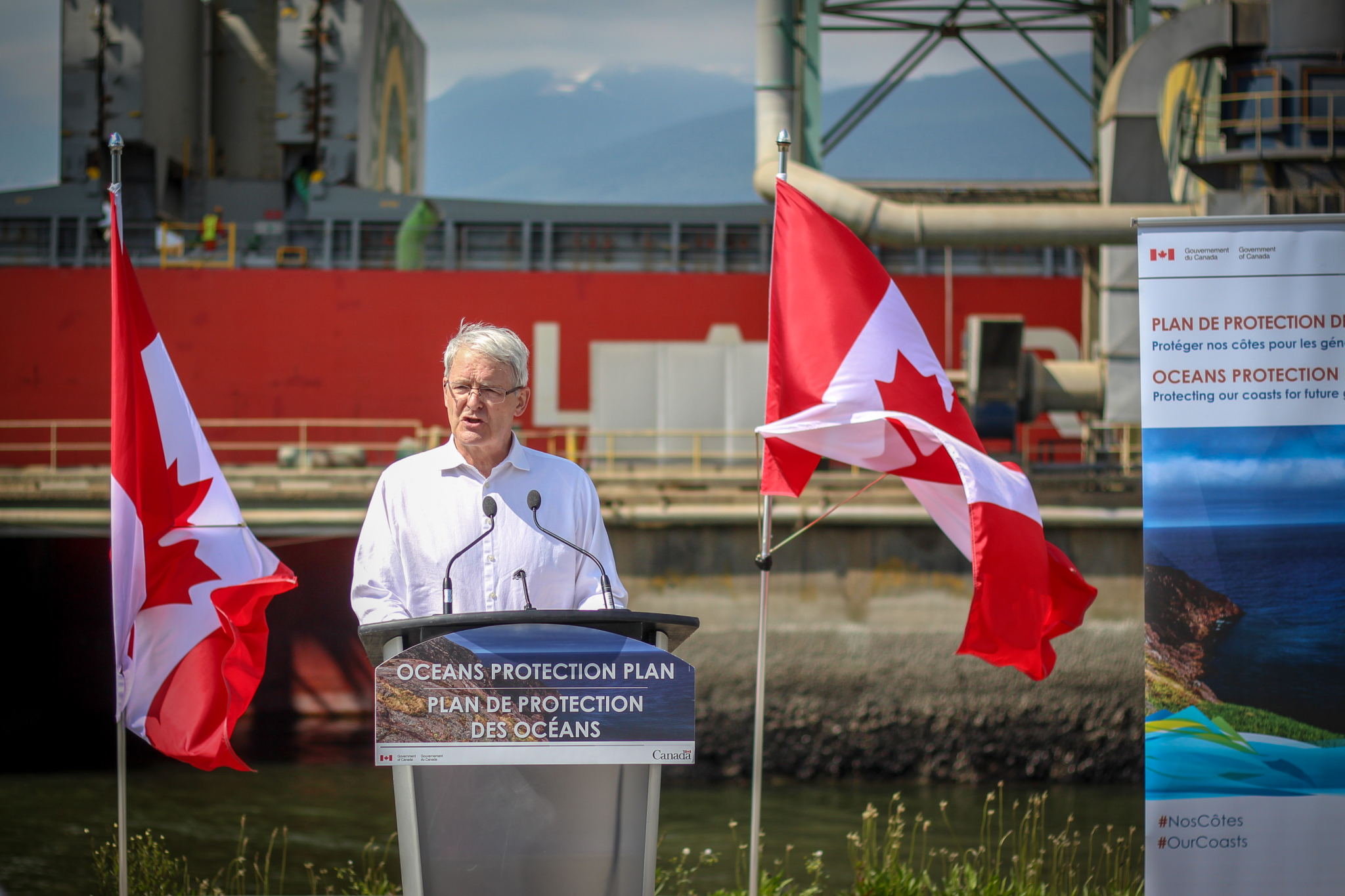 As the federal government doubles down on support for Kinder Morgan's Trans Mountain expansion, Transport Minister Marc Garneau is beefing up a national plan to protect Canada's oceans from harm, including oil spills.

On Wednesday, he announced a new set of measures to improve maritime navigation and emergency response, including seven new partnerships with Indigenous coastal communities that will test a new ship traffic information system.

He also allocated $180,000 toward emergency tow kits, equipment and training for the Canadian Coast Guard; $7.5 million over five years for a marine weather project that will deploy data-gathering "smart buoys" on the east and west coasts; and $110 million over five years to chart 23 high-priority ports across Canada's coasts to create safer navigation for mariners.

"We're developing a marine safety system that rivals the top ones in the world," he told reporters in Vancouver, B.C. "We have the highest safety and security standards in place to prevent incidents and accidents, while enabling rapid, science-based planning and response actions in the unlikely event of an incident or accident such as a spill."

The announcement comes only hours after the federal government promised to back up the Trans Mountain pipeline with public money if British Columbia continues to put up roadblocks. If completed, the pipeline expansion will increase tanker traffic in B.C. waters by more than 600 per cent, exposing the West Coast to greater risk of oil spills.

Garneau said his announcement, and the federal government's commitment to absorb the pipeline's financial risk, were coincidental. The new measures he announced today, he added, were scheduled weeks ago.

"Our country has great natural resources and it's crucial that we allow our producers and industries to get their products to market. The Trans Mountain pipeline expansion will allow just that," he explained.

"But we need to do it right. We need to make sure that the increased tanker traffic does not impact our environment and marine ecosystems. Because those are natural resources too, ones that we need to preserve and protect."

The Oceans Protection Plan is a $1.5-billion commitment announced in November 2016 to create a "world class" marine safety system through responsible shipping, restoration of marine ecosystems, strengthened partnerships with Indigenous communities, and decision-making based on oil spill cleanup research and best practices. To date, Transport Canada has announced initiatives worth more than $600 million under the plan.

The federal government has already partnered with the coastal Gitga'at and Haida First Nations to host pilot Enhanced Maritime Situational Awareness projects, which use a new information system to map ship traffic and other data. On Wednesday, Garneau added new Indigenous partners to that list, including the T'Souke Nation and Pacheedaht Nation; the Mohawk Council of Kahnawake; the Essipit Innu First Nation Council; the Maritime Aboriginal Peoples Council; the Nunatsiavut Government; and the Hamlets of Tuktoyaktuk in the Northwest Territories and Cambridge Bay in Nunavut.

Garneau said these communities' "local knowledge and expertise" plays a key role in keeping Canada's oceans safe. It's unclear however, how Indigenous-led marine response strategies will be supported and implemented through the plan.

Transport Canada could not confirm on Wednesday whether the national protection plan would support the Heiltsuk Nation's proposal, or the creation of an Indigenous-led marine response centre. Garneau said the government was taking a regional approach to considering such Indigenous-led proposals. Whether or not a regional approach upholds the government's commitment to a Nation-to-Nation relationship with Indigenous nations is yet to be determined.

"We have been working with coastal First Nations for a long time," Garneau told National Observer. "There are over a dozen in central and northern B.C. First Nations, and they’re working amongst themselves to decide who will do what to monitor our coast and respond.

"Some have indicated they would like to be the central command, but we want all of the First Nations to agree on a regional approach and then decide how best to allocate the resources."

Garneau confirmed that the federal government has additional measures planned for the Oceans Protection Plan, and will make new announcements in the months to come.

The Liberals as usual miss

The Liberals as usual miss the point: As long as the tar sands are in production they are underwriting global warming. They are no more than sock puppets for the oil deep state.... https://canadianviews-ymo.ca/rachel-carson-versus-a-besieged-rachel-notley/

Nothing about the real issue

Nothing about the real issue here, which is global warming? I'd love to hear what he has to say.

So we will finance foreign