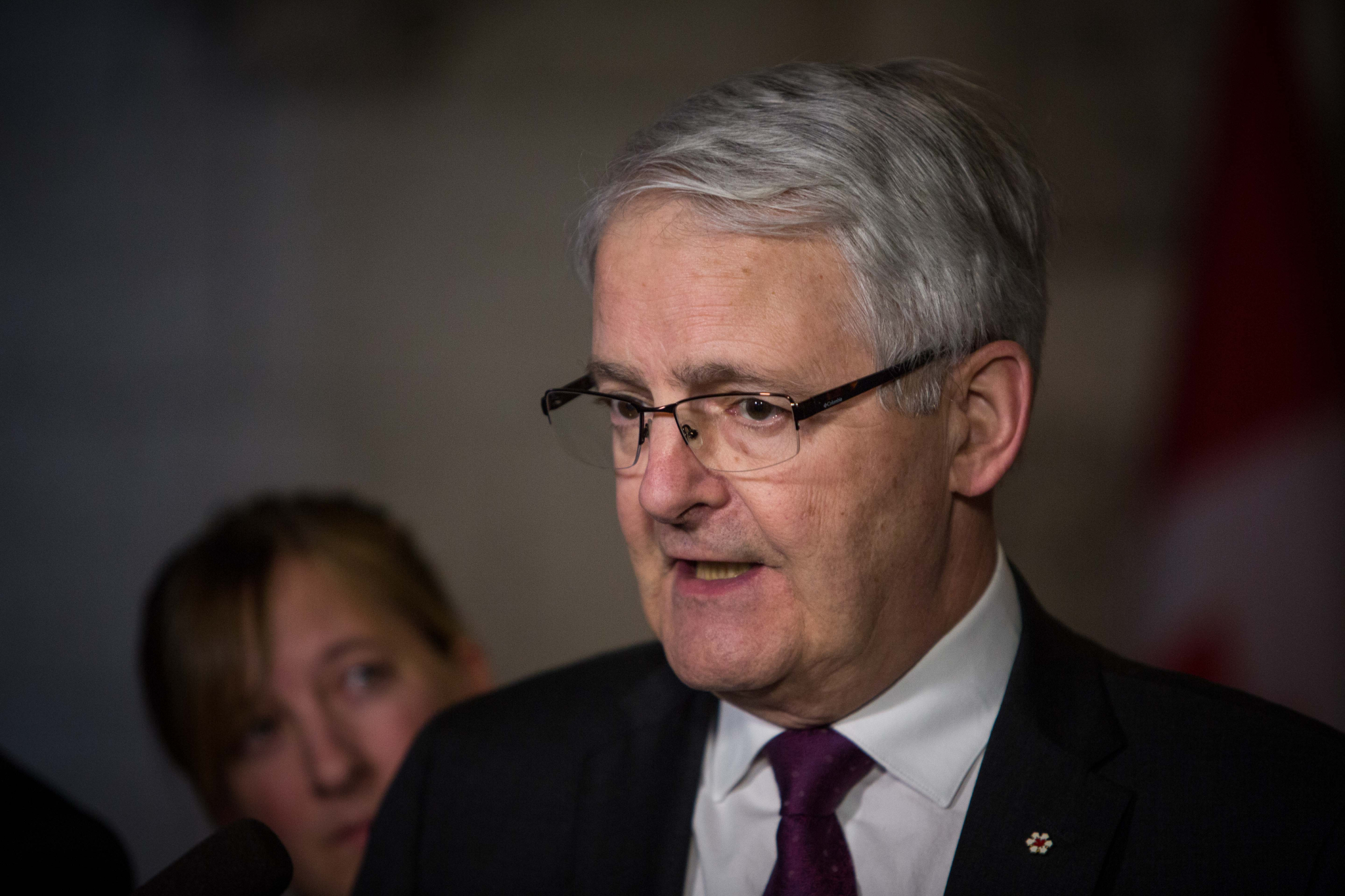 The federal Transport Department is refusing to explain why it rejected a marine safety concern flagged by the B.C. government in 2016.

The concern was among 11 safety gaps flagged by the B.C. government of former premier Christy Clark as it considered whether to support the Trans Mountain pipeline and oil tanker expansion project.

Transport Canada's top public servant was told in an internal briefing note, obtained by National Observer, that the department agreed with most of the concerns and would address them, with one exception.

Some details about the 11 safety gaps were disclosed as part of the department's response to a formal request for access to information about a meeting in May 2016 between Transport Canada's top public servant, deputy minister Michael Keenan, and Kinder Morgan Canada's chief executive, Ian Anderson. But portions of the records were censored prior to their release, including a passage that explained what the exception was and why Transport Canada didn't agree that it was a safety gap.

Canada's access to information legislation requires the government to release public records to any Canadian who pays a $5 fee, upon request, unless it has a valid reason to refuse.

After receiving the Transport Canada records, National Observer asked the department a series of questions on May 8, 2018, including whether it could explain what the exception was and why it rejected it.

Seven days later, on May 15, the federal department provided some responses that add more mystery to the ongoing west coast pipeline saga.

The Trans Mountain project, proposed by Texas energy company Kinder Morgan, has been mired in delays due to opposition in B.C. and its struggles to get the required permits to proceed with construction.

Although Prime Minister Justin Trudeau's government approved the pipeline expansion project in November 2016, the company has threatened to abandon its plans due to uncertainty caused by its opponents in British Columbia. Kinder Morgan previously said that it would walk away from the project if it failed to reach an agreement with stakeholders to address the uncertainty before May 31, 2018.

The new documents, obtained by National Observer, also indicated that the Trudeau government, Kinder Morgan and the Clark government may have had some difficulty communicating with each other about the project, with Transport Canada unaware if B.C. had shared its list of 11 marine safety gaps with Kinder Morgan, at the time of Keenan's meeting with Anderson on May 4, 2016.

But the documents also indicated that officials believed the concerns raised by B.C. could be addressed through a comprehensive national plan. The Trudeau government would later introduce a national plan to protect Canada's oceans in November 2016, a few weeks before it approved the Trans Mountain project.

Following Clark's defeat in the 2017 B.C. election, NDP Premier John Horgan, elected on a pledge to stop the pipeline, has vowed to use all tools available to protect the province's Pacific coast from spills, triggering the recent statements by Kinder Morgan executives that they may abandon the multibillion-dollar project.

Transport Minister Marc Garneau was scheduled to unveil some new federal measures to improve its existing Oceans Protection Plan at an event in Vancouver on May 16, 2018. Transport Canada, in its responses sent on May 15, also noted that Trans Mountain was facing more than 150 conditions, including requirements to plan for emergencies in different locations.

Would Transport Canada, Environment Canada, and Natural Resources Canada be able to provide me some comments about the gaps that were identified by B.C. at that time in 2016 and how they were addressed?

Through the Oceans Protection Plan, the Government of Canada is building a world-leading marine safety system that addresses the gaps raised by the province of British Columbia.

When the Government of Canada launched the unprecedented $1.5 billion Oceans Protection Plan—the largest investment ever made to protect our coasts and waterways in November 2016—our objective was to provide greater protection. Through this investment, the Government of Canada is dramatically strengthening this already robust marine safety regime and oil spill response science and research.

The Government of Canada has already invested hundreds of millions of dollars and work has started on several initiatives to protect the environment and Canada's whales, modernize marine safety, enhance response measures, support coastal restoration efforts, remove abandoned boats from our waters and improve science-based decision-making. This work is being done in partnership with Indigenous peoples and in close collaboration with local stakeholders and coastal communities.

Canada has world-leading regimes for prevention, preparedness and response, and liability and compensation for the transportation of petroleum and other products. These regimes are supported by extensive scientific research that enables evidence-based decision making. The government has invested substantially in oil spill and response research for over 35 years, and has produced over 60 peer-reviewed publications in the last five years alone focused on the science of diluted bitumen spills.

The marine safety improvements from the Oceans Protection Plan, coupled with the stringent project conditions for the TMX project, and building on the robust system already in place, will put extraordinary safeguards in place for all vessels, including those carrying petroleum products. Those safeguards include:

Crude oil has been shipped safely through Vancouver’s harbours for over 60 years, and diluted bitumen for over 30 years. We are confident that these improvements will help maintain this impressive record, and not only address concerns about tanker traffic, but will increase marine safety for all vessels, the over 3100 large vessels that use the port of Vancouver and 206,000 vessel movements in the Salish Sea annually. Once the expansion project is complete, Trans Mountain tankers will represent less than seven per cent of the total large commercial marine vessels transiting the Juan de Fuca Strait.

The Government of Canada takes its responsibilities as a national government seriously to ensure that a strong economy and a clean environment go hand-in-hand to benefit all Canadians. That is why we will ensure that Canada’s resources are developed in a way that is informed by rigorous science-based evidence, aligns to Canada’s climate change plan, protects Canada’s rich natural environment, respects the rights and treaties of Indigenous peoples, and supports our economy.

I've also noted that the document released through access to information makes note of an exception, where it appears that Transport Canada disagreed with one of the marine safety gaps identified by B.C. Would you also be able to tell me what that exception was?

As the information in the briefing note has been redacted according to Access to Information Act and the Privacy Act, we are not in a position to share more information.

I believe that I would be

I believe that I would be much happier if I went back to being totally apolitical as when I was younger. Tyee and the National Observer have exposed the hidden agendas and double entente which our government uses to justify using our tax-payer funds to finance the oil industry. Exactly what impact is $1.5 million OPP in the event of a major oil spill. What has Kiinder Morgan committed towards a major oil disaster? should not the taxpayers be informed of these condingencies? On the subject of polluter-pay principle - which I am totally against as it is equivalent to giving licence to pollute - who provides the unlimited amount of compensation available for spill response.
Last but not least: strong partnerships on monitoring and spill response with coastal and Indigenous communities; I am quite certain that most Canadians are well aware of who will be closely monitoring and will also be the first ones on site to clean up and help out.
I am truly disappointed in the people I elected, particularly Mr. Trudeau and Mr. Garneau. I rather doubt he would have left openended questions unanswered about his space ship before take-off. I'm sorry that he has lowered his principles.

Were there any actual answers

Were there any actual answers there or was it all pie in the sky, they are GOING to at some unknown time. Do we ever get a report on the gap?