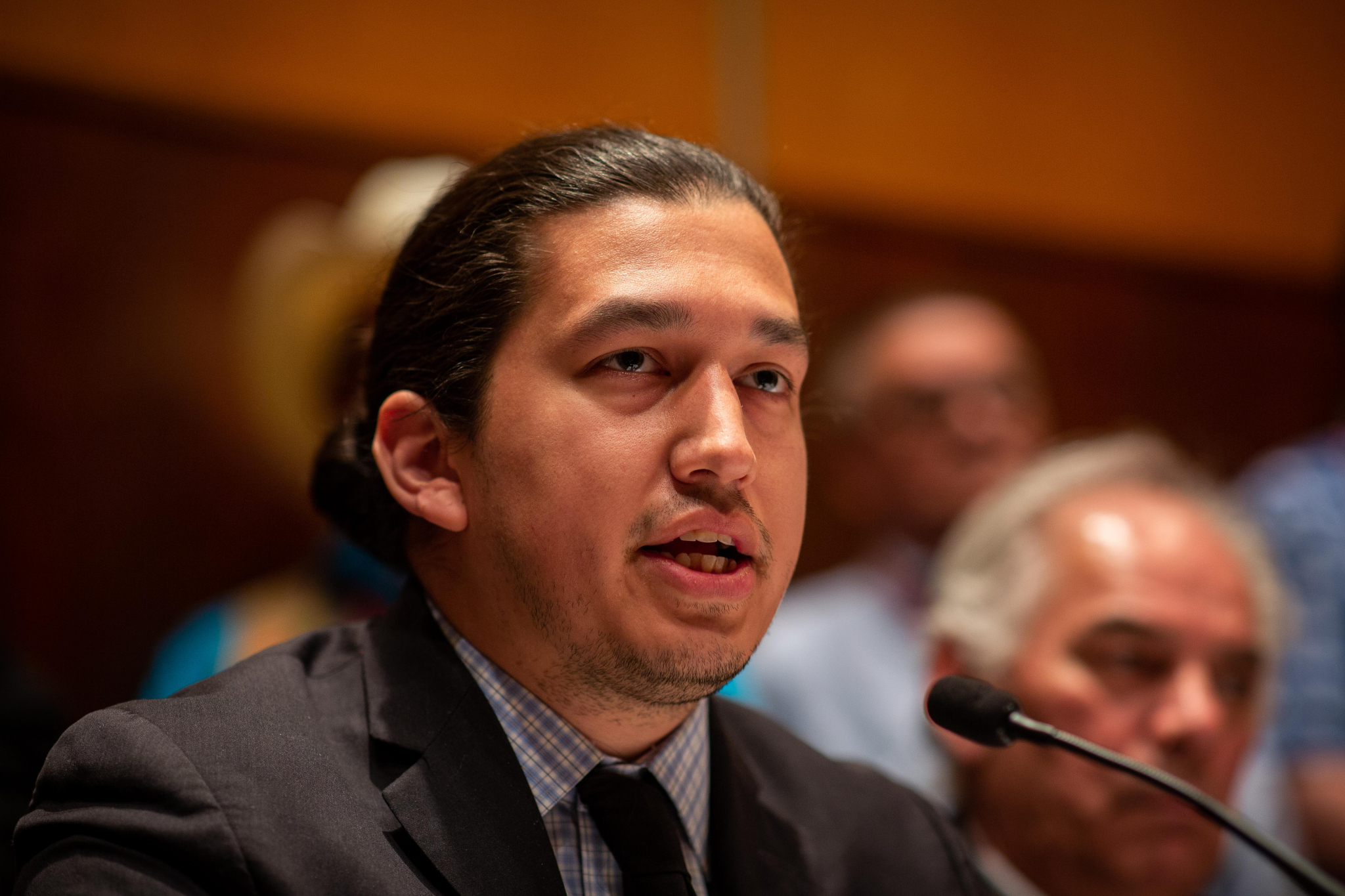 Squamish Nation councillor Khelsilem speaks at a press conference held by the Treaty Alliance Against Tar Sands Expansion in Ottawa on May 2, 2018. Photo by Alex Tétreault
Previous story
Next story

The case is one of a number of issues currently before the courts, regarding the west coast oil pipeline and tanker expansion project. The provincial court was reviewing whether the former Liberal provincial government, led by then-premier Christy Clark, had adequately consulted the Squamish Nation, prior to issuing its own approval of the project, subject to a series of provincial conditions.

The court was also ruling on a separate, but similar challenge, launched by the City of Vancouver.

Although the current B.C. government, led by NDP Premier John Horgan, has said that it doesn't want the Trans Mountain project to proceed, it was defending the approval and conditions, made by the previous provincial Liberal government, and its provincial authority over the matter.

Horgan said last summer that his government took this step after receiving legal advice that needed to defend the integrity of the Crown.

Justice J. Christopher Grauer agreed in his ruling that the consultations and the overall process were legally sound.

"In this case, there is no doubt that Squamish is deeply disappointed in the approval of the TMX notwithstanding the conditions attached to that approval," said Grauer's ruling. "It strenuously opposed the project and continues to do so. But as I commented at the start of these reasons, I must concern myself not with the result but with the process."

This case was launched by the Squamish Nation on April 20, 2017, when it alleged the province had failed in its duty to consult, urging the court to intervene. During the National Energy Board hearings in 2016, the nation expressed strong concerns around Trans Mountain’s project, especially around the risk of oil spills.

The ruling is separate from another case before the Federal Court of Appeal that is reviewing whether the federal government fulfilled its constitutional duty to consult affected First Nations.

Grauer stressed that his ruling should have no bearing on this federal case, nor the other legal dispute between Alberta and B.C. over what kind of legislation or regulations either province can introduce in support of or in opposition to the project.

"What this case does concern is whether British Columbia adequately fulfilled its undoubted duty to consult Squamish in relation to its decision to issue an EAC (Environmental Assessment Certificate) to the project," the ruling said. "By itself, it can have no impact on the decision of the federal government that this project shall proceed, other than delay."

Squamish Nation councillor Khelsilem said his community was "greatly disappointed" by the decision and would continue to pursue legal action against the project.

"The Kinder Morgan project as it’s proposed represents a significant threat to the [Burrard] Inlet and to the communities that rely on this area," he said. "So we will continue to fight in the Federal Court of Appeal and we look forward to our decision.”

He said his nation would review the Supreme Court decision and examine options for appeal at a later date.

Alberta NDP Premier Rachel Notley, who is supporting the project, said that she was pleased the Trans Mountain expansion had taken another step forward.

“The Supreme Court of British Columbia threw out two more challenges to the project," she said in a statement. "While other decisions remain before the courts, the record in the courts of TMX proponents is promising."

Notley added that her government would continue fighting to get the pipeline built.

“This pipeline is unlike any other in that it has been rigorously reviewed, meaningful consultation has taken place and it is paired with an effective climate protection plan," she said. “The failures of the past will not be repeated."

The Squamish Nation is among several First Nations filing legal challenges to stop the pipeline expansion project, which the federal government approved in November 2016. If built, it would triple the capacity of the existing Trans Mountain pipeline system, allowing it to carry 890,000 barrels of petroleum products including diluted bitumen from Alberta’s oilsands to a marine terminal in Burnaby.

The current case before the Federal Court of Appeal has also recently been seized with an extraordinary motion that asked for a review of new evidence, uncovered by a recent National Observer investigation, that lawyers for affected First Nations say demonstrate that the government rigged its review to ensure approval, violating their legal right to be consulted. This motion could delay proceedings in that case for weeks or months, even though hearings wrapped up more than six months ago.

"It’s very hard to compare processes, judges," Carr told reporters outside the House of Commons after the daily question period. "They are independent and they will call it the way they see it, but we do think that this decision is good for the project and good for the proponent because it adds a level of certainty and it shows the people of Canada that the process that was followed by the British Columbia government was the right one."

Kinder Morgan recently issued an ultimatum saying that it may pull out of the project due to uncertainty caused by the B.C. government and its efforts to introduce new rules that could stall the transportation of bitumen on its territory. The company said it would withdraw if it is unable to reach a resolution with stakeholders before May 31, 2018.

The federal and Alberta government's have said they are negotiating secretly with the Texas-based company to reach a financial settlement.

Supporters of the pipeline, including the federal and Alberta governments, say that the Trans Mountain expansion would drive growth and support a transition that enables action on climate change. Opponents say the project would lead to spills and push Canada's climate change goals out of reach.

What would be the health

What would be the health effects of toxic fumes wafting over the populated Vancouver area? Chemicals mixed into thick crude to make it flow begin to release when exposed to the atmosphere. A spill of diluted bitumen that occurred in Kalamazoo Michigan in 2010 impacted the health of almost 60 per cent of the local population with symptoms such as nausea, dizziness, headaches, coughing and fatigue.

The physical health of Canadian citizens should not be subordinate to the financial welfare of shareholders in a Texan company who are intent on privatizing the gains and socializing the losses.

Premier Notley: “This pipeline is unlike any other in that it has been rigorously reviewed, meaningful consultation has taken place and it is paired with an effective climate protection plan."

Three strikes. Yer out.
The UN, the Organization for Economic Co-operation and Development (OECD), and the federal Environment Commissioner all issued warnings in 2017 that Canada is not on track to meet its targets. Oilsands emissions are the major obstacle.
OECD: "Without a drastic decrease in the emissions intensity of the oilsands industry, the projected increase in oil production may seriously risk the achievement of Canada's climate mitigation targets."