Singh sides with B.C. in hornet's nest of pipeline politics for the NDP 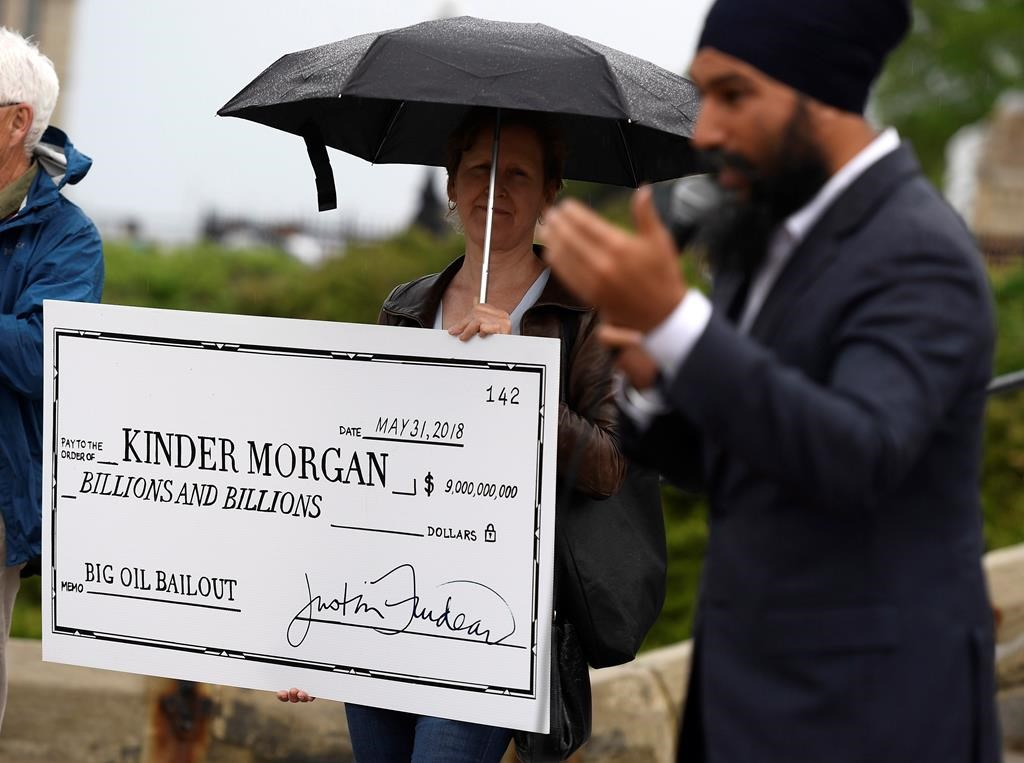 NDP Leader Jagmeet Singh speaks as a woman holds a novelty cheque made out to Kinder Morgan at a rally against the proposed Trans Mountain pipeline project, on Parliament Hill in Ottawa on Tue., May 22, 2018. File photo by The Canadian Press/Justin Tang
Previous story
Next story

Jagmeet Singh planted the federal NDP flag firmly on British Columbia's side of the Trans Mountain dispute Wednesday after months of trying to stay neutral in the bitter feud between his Alberta and B.C. counterparts over energy and environmental policy.

In fact Singh said he hasn't even had a conversation with Alberta Premier Rachel Notley in months — not since Notley called him and his position on the pipeline "irrelevant" last fall, nor since Notley's description of him last week as "absolutely, fundamentally, incontrovertibly wrong."

"We've not have a chance to speak yet," Singh told a news conference after his weekly caucus meeting.

Until recently, Singh had called for a more thorough environmental review process on the proposal to twin an existing pipeline that runs between Edmonton and Burnaby, B.C. He now says he is 100 per cent opposed, since Ottawa wants to put money on the table to cover any cost overruns caused by political interference — largely from a court challenge by the NDP government in B.C.

"This was a very difficult decision for me," Singh said. "It wasn't something I took lightly but leaders have to make tough decisions."

The NDP's positioning on the pipeline is a political hornet's nest. B.C. Premier John Horgan campaigned on a promise to oppose the pipeline and his minority government depends on the support of the B.C. Green party, which requires Horgan to continue to oppose it with "every tool available."

As the premier of a province where the energy industry accounts for about one-quarter of GDP and one-tenth of the jobs, Rachel Notley's political survival hinges on the pipeline being built.

Federally, the NDP have but one seat in Alberta compared with 14 in B.C. But Singh's own designs on a House of Commons seat could also be in play: MP Kennedy Stewart is vacating his Burnaby seat later this summer, creating a tantalizing opportunity for a leader who desperately needs to make his presence felt in the House.

Stewart himself told The Canadian Press this week Burnaby is the NDP's stomping ground, noting all four provincial seats and the entirety of the city council are NDP members. Singh would "have a very good chance of winning here" were a byelection to be held, Stewart said.

He also said after the high cost of housing, the pipeline is the biggest concern in the riding.

Singh denied the suggestion that the byelection had anything to do with his position on the pipeline. He said he hasn't even decided whether to run there, noting only that he won't make a decision before discussing it with his team and taking their advice.

His position really changed, he said, because the Liberals now want to force Canadians to shoulder not only the environmental risk, but now the financial risk, of the pipeline "to benefit private shareholders of a corporation in Texas."

The Liberal government's financial commitment to Trans Mountain is just another subsidy for the fossil fuel industry, something Prime Minister Justin Trudeau promised to do away with, said Singh, who urged the government to spend its $1.3 billion in grants and tax credits on clean tech instead.

Singh did not take aim at Notley himself Wednesday, instead choosing to praise her for doing what she promised to do to stand up for the people of Alberta. He even called her carbon tax plan the "best climate change plan in the country."

"If we want to attain our climate change goals, we need a premier like Premier Notley," he said.

Notley, however, was less gracious.

"The private shareholders that he's describing happen to be part of a company that will contribute about, I don't know, roughly $15 billion to the Canadian economy and will contribute to and support over a quarter million jobs in the country of Canada," she said on CBC's "Power and Politics."

"It is a ridiculously naive statement."

— with files from Lee Berthiaume